Since the catastrophic failure of EA’s Rory McIlroy PGA Tour that nearly sank the genre five years ago, HB Studios has been producing a quaint, if not rough-around-the-edges, golf experience called ‘The Golf Club.’ And while the several editions that have been released to date haven’t exactly been able to scratch that Tiger Woods’ itch that has pestered fans since the late 2000s, 2K games is looking to remedy that. Stepping in, taking the bull by the horns, and rebranding ‘The Golf Club’ as the new PGA Tour 2K series is an exciting move for a generally starved fanbase. So, is the HB Studios and 2K collaboration the hole-in-one we’ve been hoping for? Just hit play on the video below to watch our full video review of PGA Tour 2K21 to find out.

Unfortunately, during our time with PGA Tour 2K21, we found it to be nothing more than an homage to future potential. As it stands, none of the courses present any better than golf games of the early 2010s. Assets are bland, with most textures lacking the sort of detail you would expect from a modern-day title. Character models are laughably terrifying, with crowds, in particular, looking insultingly bad. Each of the officially licensed professionals is more stiff and awkward than the last.

Lousy visuals aside, PGA Tour 2K21 also misses the mark on appropriately depicting the emotion of the game. Fans in attendance react (somewhat) correctly to each of your shots, but so much else of what makes for high stakes is entirely absent. Winning feels anticlimactic because victory equates to nothing more than receiving a picture of a trophy. Commentary is irritatingly hit or miss, and will often fail to build up the thrill of making a clutch birdie, or the agony of a devastating bogey. 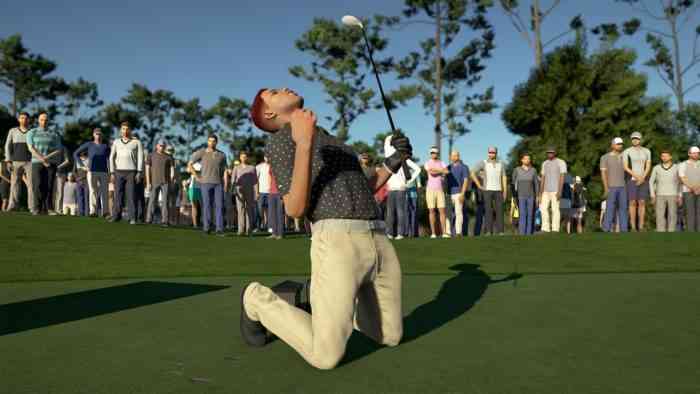 Although HB Studios has a long way to go in the presentation department, it’s undeniable that they’ve captured much of the satisfaction that comes with nailing your shots. Driving, approaching, chipping, and putting all feel fantastic and accurately replicate the excitement of adequately assessing, for example, a difficult par-5. It’s without question that the newly invigorated, and now former, Golf Club series is sitting at the base of a mountain made from potential, though it may be a hell of a climb getting to the peak. The course creator is one of the best things we’ve seen come to a sports game in a long time, and as long as it worked, hitting the links and knocking down a few holes felt as good as it ever has. Still, despite the hopeful, brilliant optimism behind PGA Tour 2K21, we have a difficult time recommending the game.