It’s good to see a quality franchise make it to the big show, and HB Studios’ newest entry has done just that with the addition of a PGA license in The Golf Club 2019. The series has garnered a good number of fans with previous installments and having a that PGA license in tow can only bring more attention to their titles. The question is, will that attention be good?

TGC titles are always rather high on customization aspects. From the players to the courses there‘s a lot to choose from. Along for the ride once again are the user created golf courses, with over one hundred thousand of them. There are, of course, some special additions this year: for the first time we have official PGA courses. That’s the good news. The bad news is that there are only six of them. That may seem a little disappointing, but they do still have an absurd number of other courses available, along with the ability to make and upload even more. While I’m talking bad news, it might be time to mention that there are no PGA pros to play against either.

So with this sort of limited use of the license where do things go? The main area of effect here is the solo career mode. Players start off in the Q School, try to work their way into the Web.com Tour and finally to the PGA tour.  It sounds simple enough, but don’t worry, the competition is a bit stiffer than anticipated. Having played and done well on all the previous TGC titles, I thought this would be no sweat. Yeah, about that…nope. Playing through I found myself stuck on the Web.com Tour.

The goals for promotion sound pretty easy, either three wins, top fifty in points or top seventy-five in earnings to qualify for that championship. The thing about TGC games, they’re not exactly easy to get down. What made matters worse here is the spread between 1st place and 156th place. At five shots off the lead I could expect to be no better than 100th place. If you check the results from the Web.com tour most tournaments have that kind of spread between 1st and 4th place in real life. Granted that’s over four rounds, but still. It was like the golfing equivalent of Ricky Bobby in Talladega Nights. “If you ain’t first, you’re last.” I never once needed Tom Cruise to use his witchcraft to get the fire off me, that’s for sure.

If You Ain’t First, You’re Golfing.

So what changed in play from TGC2 to TGC2019? This time around the ball really likes to bounce and roll and roll…and roll. I’m not sure I ever managed not to outhit the club range, even into the wind, unless I straight up shanked the thing. The need to make minor adjustments to things like loft or fade on every shot is real. Also, while I’m at it, be sure to check every time what club is being recommended to you, as chances are it’s not the one you really want. If you just play the recommendation with no adjustments, there’s a good chance you’ll be long on the approach every single time. Knowing when to club up or down or adding loft is essential. It’s covered in the tutorial, which is pretty good, but I still find the tutorial in The Golf Club VR to be the best one to date.

One thing that stays the same is the putting (that’s not entirely true, as I do feel it’s a bit better this time around, but it’s still really tough to truly get the hang of). It’s not just making the proper read and executing with the proper amount of power, but then getting the swing right. I didn’t know it was really possible to shank a putt, but apparently, you can! So even when you mess up a putt (and you will), it’s hard to really examine what went wrong because there are a few variables involved. There are roughly the same kind of variables with all the shots, but none of those have to be as exactly precise as a putt. It can be maddening at times—it’s certainly difficult—but by god if it doesn’t feel really good to get everything together for that one golden moment when you drain a thirty-five footer. Don’t get used to it though! You’ll miss more six footers than you make. 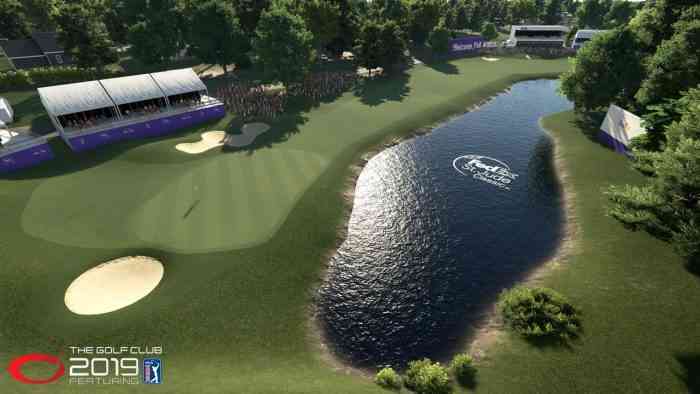 What makes it so difficult but so satisfying when things go right are the controls. I actually really like the controls, and this year switching to the left stick for shots as opposed to the right feels more natural to me. To shoot requires pulling back the stick, then pushing it straight forward. The path the stick takes matters as well as the speed. There’s a lot of that good old sports muscle memory going on. The thing that is lacking though is feedback. Gauging power often seems like an impossible proposition. Even just some slight rumble in the controller, building as you get to the peak, would do. Yeah, I know a real golf club doesn’t do that, but in reality, I have much more control over how much power I put into a shot as well. Shots going long and bouncing and rolling would be less of an issue if you could reliably gauge how much strength was going into the swing.

While I may sound a bit down on TGC 2019 I quite enjoyed it. It’s entirely addicting and filled with more content than you could ever hope to play, so much so that I didn’t even really touch on the improved matchmaking and multiplayer options, the course creator, societies, etc. That mountain of content is wrapped up in a game that is overall pretty good. Much like golf, things that go wrong will frustrate you beyond belief, but they’ll make you feel like a million bucks when they go right. At least if you throw your controller in frustration at a bad shot it’ll be cheaper to replace than dumping your bag of clubs into a lake.

***A PC copy was provided by the publisher***