Old World is a new 4X strategy game from Mohawk Games that takes cues not just from Civilization, but also from Crusader Kings. You play as a dynasty rather than one immortal leader, and the game doesn’t try to cover the entire scope of human history, but rather, the era it refers to in the title: The Old World. In our time with the Early Access build of Old World, we found it to be a game that explores new mechanics and greatly expands what a turn-based strategy game can be. To see our full first impressions of the game so far, hit play on the preview video below.

Old World allows you to lead nations and civilizations from the Mediterranean region towards the start of the first millennium of the Common Era. Greece, an early version of Rome, Egypt, Assyria, Persia, Babylon are all the places you can take charge of.

Of all the fresh ideas Old World brings to the table, the most significant is the order system. In most 4X strategy games, units have a number of actions per turn. Maybe they can move two spaces and construct a building, or move and attack, or whatever. In Old World, you have a universal pool of orders to spend from. It’s probably a lot more than you need, so you can use your orders to get builders started on projects, to reposition your military, or to send one scout really far. If you tell one unit to do too many things, it will eventually start taking damage, but this system allows you to go broad or deep. 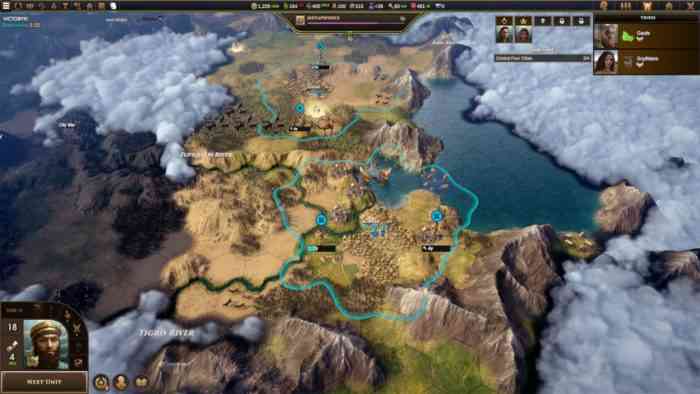 Research is another innovative mechanic of Old World. When you research a new technology, you draw a hand of options of where to go next — you can’t choose to research anything. If you want more control, you can learn abilities (or hire advisors) that let you redraw your hand. Unclaimed resources can be claimed by your scouts, giving you a quick early bonus to growth. Since these sorts of games always start with ordering scouts around the map, this mechanic gives you some much appreciated direction.

Rogue Lords Review – The Devil Made Me Do It
Next We Talk About Maneater’s Progression, Characters, and Story in 13-Minute Video
Previous Feel Like a Badass Operative Kayaking & Sniping in Phantom: Covert Ops Gameplay Video