Releasing first on Google Stadia, Young Souls may possibly be the best reason to utilize the Stadia platform at this time. Described as a 2D brawler with action-RPG elements, Young Souls provides a relatively refreshing narrative that was better than I first expected.

Young Souls puts players into the roles of Jenn and Tristan, a pair of orphaned twins typically seen as outcasts in their town. The two are taken in by the Professor, a relatively secretive individual whom Jenn and Tristan even contemplated calling “dad”. After a series of events that render the Professor missing, Jenn and Tristan discover a whole other world filled with dungeons, goblins, magic, and more connected with their own reality.

Overall, the narrative of the game is quite strong. In the beginning, I felt that Jenn and Tristan were designed in a way that was a bit too edgy just to be edgy, but the characters definitely grew on me and were much more than that. At the outset, Young Souls felt like a mixture of a Cartoon Network IP and the Trollhunters series, in terms of both narrative and feel. I also appreciated meeting and understanding the many characters in the game, including the enemies. Overall, the writing was strong, and no single character felt inconsequential.

As mentioned before, Young Souls is a 2D brawler with action-RPG elements. This means that there are essentially two primary portions to the gameplay loop. The first revolves around Jenn and Tristan within their town. Aside from advancing the story through completing quests and objectives, players are able to improve their gear, stats (via leveling up), and interact with various NPCs. 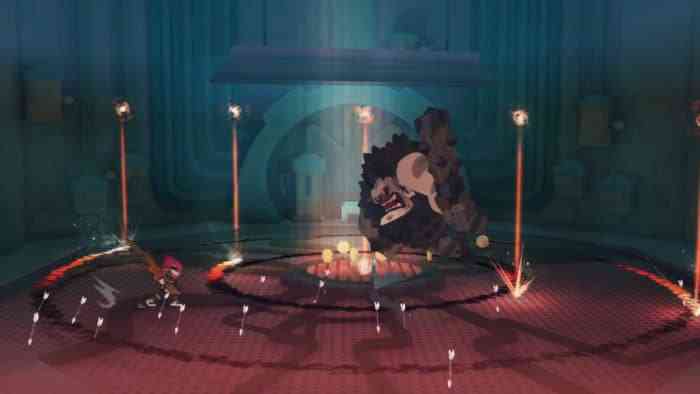 Meanwhile, the brawler portion of Young Souls takes place within dungeons. These are also pretty straightforward as players fight through a variety of levels and goblins en route to finding the Professor. Players will also find an abundance of loot with which to improve their characters, ranging from common equipment to more unique and interesting ones. Character building, as always, is a good time, and I found myself building Jenn and Tristan differently to suit different situations. In cooperative play, I can see these strategies differing according to playstyle as well.

While the game features cooperative play, my experience with Young Souls was limited to the single-player portion. When playing alone, players may tag in and out between Jenn and Tristan. It would have been nice to have an AI control the other twin when playing solo, but it works alright nevertheless.

Although more video game experiences are trending towards it, it was still great to see Young Souls incorporate various accessibility options within the gameplay. With it, players are able to adjust the game’s difficulty as they see fit. While these options are not necessary for everyone, it is still great to see this for anyone who requires them.

Young Souls’ audio and visual components play a big role in the game’s overall feel and atmosphere. The aesthetic of the game features a bit of that Cartoon Network-style look, with a muted color palette and unique character designs. Although the audio portion of the game isn’t as noticeable as the visuals, the soundtrack does suit the game well. Perhaps my favorite part of Young Soul’s audio is the sound effects, which in conjunction with the weapon’s feedback, helps with the game’s engagement.

Overall, Young Souls feels like a more mature cartoon in video game form, in a good way. It features two strong gameplay loops with satisfying elements and feedback. While there were some gameplay decisions that I wish were different, Young Souls is a solid package. Also as a note, it ran smoothly via Stadia, which was actually my first experience with the platform. All in all, Young Souls is a video game experience that is more than it first appears, and should not be overlooked.

No companion AI
Can get repetitive