Something that each and every child starts to realize as they grow older is that their parents were right. One day you’re going to look at the world around you and realize that everything has changed. You used to be cool and hip, you used to know what was what and what wasn’t, now all of a sudden what was isn’t anymore and what is, is strange and probably stupid. You look at the children around you with their Minecraft and their Yo-Kai Watch, the latter being the game that I am here to review. “Kids like such lame things these day! Kids should still be playing Pokemon! Pokemon is a classic!” Pokemon is a classic. It hits you like a ton of bricks falling from a skyscraper. You’re getting old. Now you’re the jaded old fart telling kids to get off of your lawn. Calm down old man. The kids are just looking for a ghost to catch. Now go grab a bran muffin, a newspaper, and think about how many things you had to climb uphill both ways to get to. 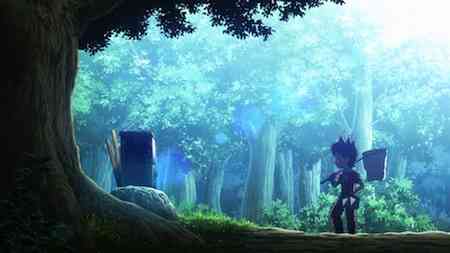 In the ever-evolving world of “newest kids craze”, we find ourselves staring at a very familiar face…well…long removed cousin of that face. Yo-Kai Watch plays a melody so similar to Pokemon in both theme and tone that if you and I were just a few years younger we’d be eating this stuff up like flies at a poo convention. The main goal is clear from the get go. There are ghosts among us, most of them silly, and we need to make friends with all of them! Of course there is a bit more to the plot than that, but you get the point. While Yo-Kai Watch does share some fairly “red-flag” similarities with Pokemon, it actually does a stellar job of setting itself apart from the game franchise veteran to the point that the two of them will very likely coexist with one another.

Like many role-playing games, Yo-Kai Watch is a top down adventure styled game with an emphasis on exploration. The more you explore, the more you find and the more of your soul the game slowly sucks away. Ghosts and items are hidden everywhere! Up trees, under cars and porches, in vending machines, between your teeth, and probably possessing the dude on the infomercial you watched last night. The game kicks off by teaching you how to use the most important tool in your arsenal; the search function. As you wander you’ll encounter many places that will allow you to search (as indicated by a magnifying glass icon). Searching is executed by sliding your stylus around on the bottom screen. This moves your reticle on the top screen around and allows for you to see things that would otherwise be invisible…like, you know…ghosts. After finding and defeating a pack, or “gaggle”, of wild ghosts there is a chance that one of them will join you. The more ghosts you have, the more options you’ll have for building an effective combat team.

“Aside from it taking me (and potentially many others) an embarrassingly long time to get a handle on the combat system, this game is a good, solid package that I recommend, as it will offer loads of fun for those that have the time”

A good RPG will have you spend most of your time in combat. A great RPG will split your combat time 50/50 with everything else, but none of that means anything at all if the combat itself sucks. As it is with many RPG’s of our current era, most of the actual fighting happens in auto-pilot. Ghosts will attack one another without any input from the player whatsoever. You manage everything else surrounding the combat sequences. Combat in Yo-Kai Watch is 3-on-3 turn based with ghosts attacking in order of who is quickest. You can jump in with a number of commands to help your team snare a win as smoothly as possible.

First off, you can drop in with items whenever you want, be they items to heal or buff. Secondly, you may throw a “pin” into the battlefield and onto a target that you would prefer your team to attack. As for the third command, you can activate a “Soultimate” attack, which is a very powerful attack, and it varies depending on the ghost using it. The fourth command allows you to purify a party member. Your team may become afflicted with some unsavory effects at times that hinder your combat prowess and purifying them will clear the negative status and give a tiny bit of experience to boot. The fifth, and final, influence you have on the outcome of a battle is the way you can rotate your ghosts. Team members (both in combat and in the menus) are laid out in a circular format, or “wheel”. The way they are placed in relation to one another can change the effect they have on each other’s performance. When Ghosts of a similar type are placed beside one-another they grant each other combat bonuses, such as a speed buff at the start of a match. During combat, your “wheel” can be rotated at any given point to change the party members in play. This is especially useful for pulling fallen team members out of play, or simply for shielding ones that are in need of purification. 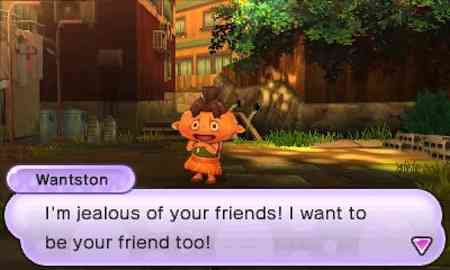 Yo-Kai Watch offers a simple but clean look, and my immediate response to it was one of envy. I’m glad that a game exists that can offer a feeling of openness and grandeur…but I really want it to be Pokemon that does this. One of the most compelling features of Yo-Kai Watch is simply running around and looking for stuff. Cities feel big and forests feel dense. There’s a waterfall…and it’s pretty cool. The character design for the ghosts seem to all be heavily based in Japanese lore. This isn’t a bad thing; in fact it only proves to show that this series has a lot of room to grow. Many of these ghosts are pulled directly from folk tales such as the Kappa, or Oni, and some are just weird old men that like to hang out in the trash (I’m looking at you Hungramps). The game also includes small, very irrelevant to anything, animated clips of ghosts doing god knows what for folks that complete bonus quests. This is an adventure that both feels and looks big, and it’s awesome.

Aside from it taking me (and potentially many others) an embarrassingly long time to get a handle on the combat system, this game is a good, solid package that I recommend, as it will offer loads of fun for those that have the time. It’s deep, but not overly complex. If you have kids, and want to not see them get outside their room, you should buy them Yo-Kai Watch. Hell, you may end up liking it too. But me? I’ve got a thousand other “time-vortex” games like this on the go.

***Reviewed on the 3DS with a retail copy provided by publisher*** 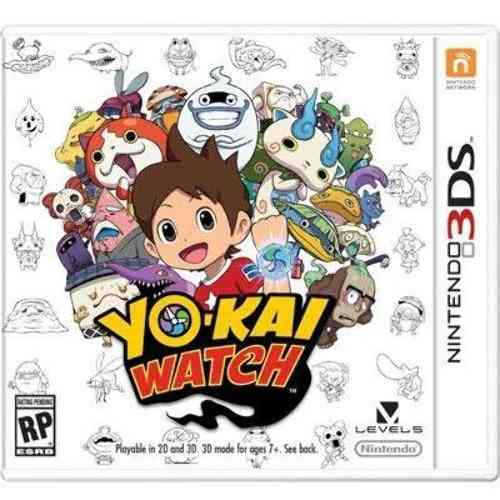