Warparty Review – There Ain’t No Party like a Warparty Party

Real-time Strategy games always have a certain flavor to them. They are usually about warring in either high fantasy, sci-fi, or recent historical settings and the players they attract tend to be specifically interested in the genres provided. Usually, the idea is the same: build resources and armies to achieve an end goal. The world of RTS gaming is a bit daunting, as so many RTS games vary so wildly in objective behavior, but some tenets are always the same, and Warparty, the latest RTS launching on March 28th, takes some of the best aspects of those games and presents them to you in a fun an intuitive way.

There are two game modes in Warparty: Single-player and multiplayer online. The single-player portion of Warparty is a campaign experience, in which you choose to play as one of three faction chiefs to complete multiple quests and gain territory for your tribe. Each of the three tribes has one of three power types: Warrior arts, Dinosaur control, and Necromancy. As you build your army and resources, you grow stronger, and thusly, build your empire to be strong enough to take down your opponents. The story was compelling, but I found the campaign itself a little too short. I wanted more story!

Zombies and Dinosaurs are Like Peanut Butter and Jelly

There were some cool features in Warparty that I haven’t seen very much in RTS games. First off, getting to tame dinosaurs that were out in the wild was pretty fun. Second, the necromancer tribe was really fun to play around with because their chieftain can just summon the dead straight out of the ground, but it did feel really overpowered to be able to raise new armies on the fly, even mid-battle.

Multiplayer offers to matchmake for strategy matches very similarly to games like Starcraft, in which you can choose the objectives, complexity of gameplay, and types of opponents you are matched with. The first to achieve all map objections and destroy the entire enemy faction is declared the winner. Once the game launches, the multiplayer games and servers will be widely available on all platforms, but there will be no cross-platform playing. 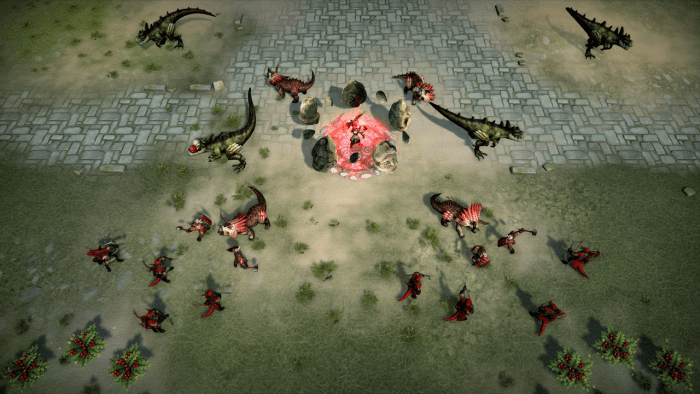 The controls for Warparty are just like all RTS games: mouse-click and drag to select. From there, you can select a number of tasks, including fighting, defending, or building. Different unit types have different abilities. Villagers build your home base and grow your resources, and units that are in your army travel with you or defend the base, depending on where they are assigned.

I played several matches versus the AI, and it seems like they are programmed in a responsive and realistic way. They make the tactical and building decisions I would expect a live player to make. They are more aggressive than the standard player, though, which maybe was good training for going up against others. The villager AI, however, could be a bit more automatic. If there’s something that needs to be done, I wish they would handle it, rather than go idle. 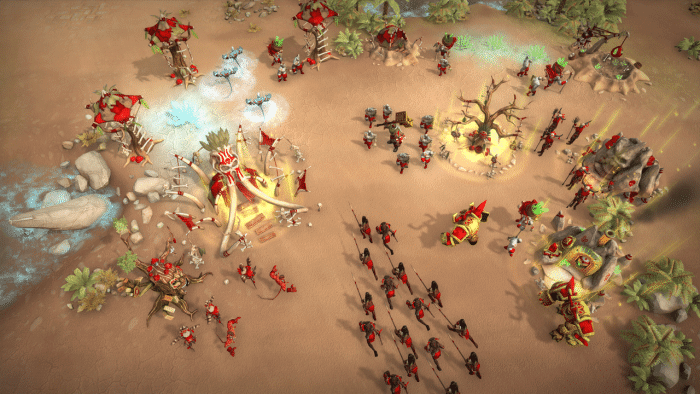 The graphics are cartoonish and well-designed, and the characters are likable and fun to move around. The units themselves are intelligently designed so you can very easily tell archers and warriors apart, and if you get any villagers wrapped up in your Warparty by accidentally selecting them, they are designed differently enough that it’s easy to parse them out to their specific tasks rather than enable their delusions of grandeur by having them hit enemies with their berry baskets.

The music is fun, tribal drumming and the voice acting is pretty good. The lines are delivered in a believable way and each character has its own personality. The flavor and idle speech is clever and kind of silly (“You point, we smash!”). The chieftains of each tribe are more intelligent than their primitive soldiers, especially their warriors and zombies, but it doesn’t detract much. 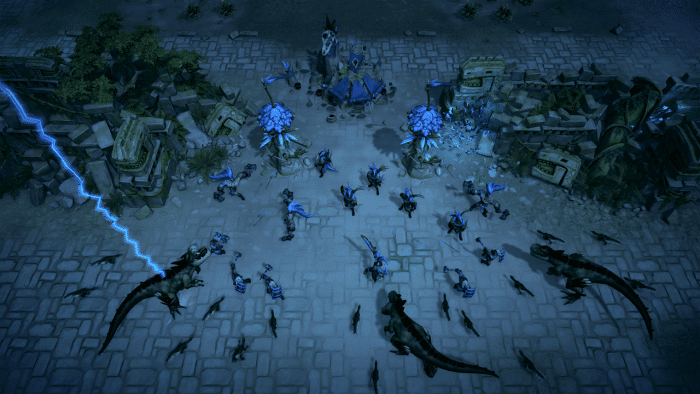 Overall, this is a pretty good step into the RTS realm. The game itself runs very smoothly and I didn’t find myself fighting with any major bugs or glaring offenses in the design of the game. I feel the game may be too rudimentary for veterans of the RTS genre, but as a less experienced player, I found myself immersed in the gameplay and pretty entertained. 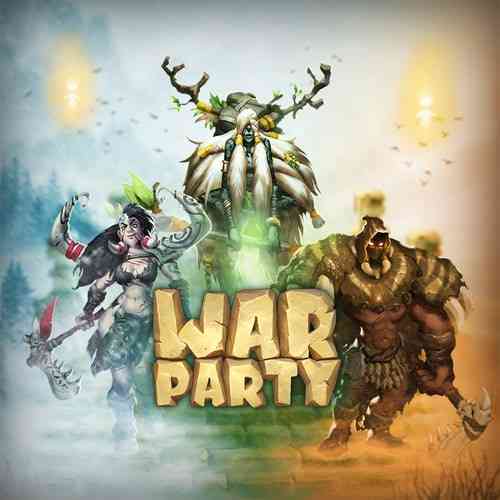 Strategy RTS Men of War II Has Been Delayed Until 2023