Valhalla Hills Review – The Dull Side of Being a God

Introducing Valhalla Hills, a simulation style “God game” that places you in the role of a God who must lead a group of vikings to build a small community and eventually activate a magical portal that’ll move you to another level (or map). There haven’t been too many decent “God games” as of late; will Valhalla Hills buck that trend, or are we in for yet another dud?

You are Leko, a Norse God who has been ousted from Asgard by his angry father Odin. Now, he is stuck on Earth with other slain vikings who wish to reach Valhalla. As a god, Leko has the ability to control and encourage these vikings to construct little communities. Eventually, Leko will lead the vikings through a magic portal to Valhalla!

Each world in Valhalla Hills is a randomly generated piece of land in the middle of a vast ocean with limited resources, some enemies and animals, a starting rune, and a magic portal. The goal is to lead your vikings from the starting rune to the magic portal to earn victory. When your vikings are close enough to the portal, you can activate it in one of two ways – one is to fight a specified number of new enemies that’ll pop out of the portal (and beating them will earn you victory) or you can build an altar and sacrifice a specified number of items (such as fish or wheat) to appease the Gods and win in a non-violent way.

“The vikings are designed to act to your benefit, but sometimes their autonomy can be a frustration.”

You begin with some basic resources like wood and stone and a small group of vikings. You build buildings such as woodcutters, toolmakers, saw mills, and probably about 20 other buildings. Here’s the kicker: you can tell vikings to make a specific building, and they’ll listen assuming they have the resources and they’re not tired, hungry or under attack. But ultimately you have no control over the actual vikings. 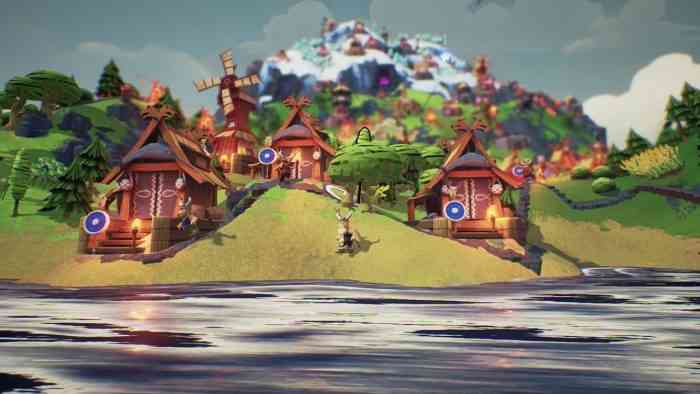 The vikings are designed to act to your benefit, but sometimes their autonomy can be a frustration. For example, if an enemy happens to walk near your camp, the vikings may flood towards the enemy, and possibly get slaughtered in the process. Careful planning on where you build buildings and ensuring you have little army outposts properly stocked is critical for success.

The game features two modes, Classic Mode and Open Game. Classic Mode is the primary mode where you’ll start with simple structures, tutorials and eventually build your way up to more buildings and larger maps. Classic Mode is also the mode that will allow your vikings to eventually level up and earn their place in Valhalla (the game’s ultimate goal – though I’m not sure there’s an actual ending). Classic Mode is also the mode where you’ll earn Trophies. Open Game throws you into the fray with access to everything and is primarily designed for experienced Valhalla Hills players. There is no multiplayer option in the game. It would have been neat had they added a competitive mode where you and up to three other players all began on the same island (just in different areas) and raced to activate the magic portal first. 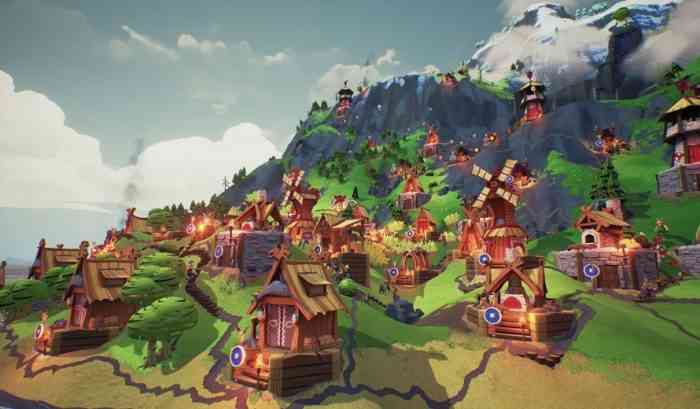 Valhalla Hills isn’t winning any awards for graphics. The vikings are very simple and would fit in early generation PlayStation 3 games (not a typo – this game is nowhere near what the PS4 is capable of), as would most of the environment. However, the water effects are quite nice and the horizon surrounding the island is a pretty vista. The game’s music isn’t bad, it’s generally a fun, quirky piece while you’re building your village, but it repeats far too often – some variety would be nice. The music does transition into a sort of battle theme when enemies approach and attack your village. The vikings generally speak a sort of gibberish to each other which is kind of cute to hear. The game’s audio highlight is when you request more vikings from the heavens and they fall from the sky with an amusing “ahhhh!”.

Valhalla Hills is a middle-of-the-road “God game” sim. The overall look and aesthetic is cute and the audio isn’t bad. The use of viking mythology helps set it apart from other games in this genre. However, the actual gameplay is a bit dull. With limited control (you’re essentially just deciding where buildings are to be built and a few other minor choices), I often found myself just watching the vikings do their jobs while I waited for a certain building to be built or until they supplied enough items to the altar to finish the map without a big fight. If you’re in desperate need for this style of game, then you’ll probably find some redeeming qualities – just don’t expect a very deep experience.