There aren’t enough brutal strategy games about managing a mercenary company. There, I said it. It’s been years and years since the last good Jagged Alliance and the intervening years have brought us Battle Brothers and… not all that much that’s notable. But a number of titles in development are putting different spins on the idea, so I was keen to get my hands on Vagrus: The Riven Realms.

The first thing that hits you when you start up Vagrus is the lore. There’s a gorgeous fantasy map, a mythic history, and a whole bunch of vocabulary words to learn. I guess for some people that feels like homework, but I know I’m not the only one out there who likes to read doorstopper fantasy novels. Vagrus has the richness and depth of something like that. This isn’t a generic medieval fantasy. It’s weird. It’s dusty. There are cool dinosaur things and creepy ancient magic and sacred caravan pacts. Story is something Vagrus does well, which ends up being a good thing. 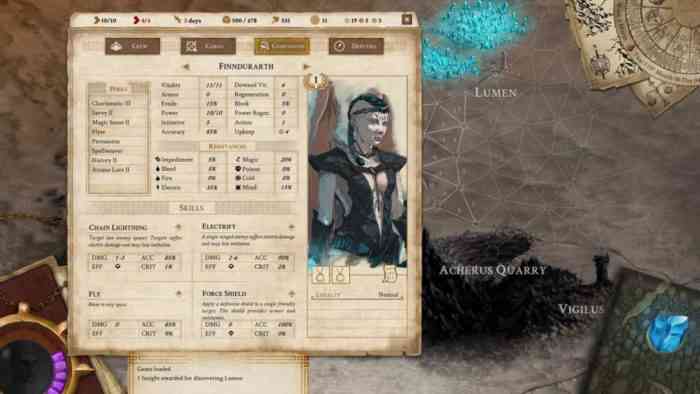 Vagrus doesn’t play like those games I mentioned above. The turn-based combat has the different sides line up like a JRPG and pick from a set of unique class moves. The economy is deep, but you aren’t grinding for better gear. Most of the game is played on visual novel style text menus. I was kind of surprised by this. Where I’ve seen Vagrus being talked about, people seem most interested in it as a strategy management game. In reality, Vagrus is going to use a completely different part of your brain.

So expect to do a lot of reading when you boot up Vagrus. Huge paragraphs of text. These aren’t a chore to read, because the writing team from Lost Pilgrims have penned some vivid descriptions. They sometimes pull of a dark wry humor that I think a lot of games are going for, but few manage to land. You’ll have trouble choosing between your dialogue choices, when all of them would be a cool thing to say, and you’re often on uncertain footing with NPCs in towns, the other factions, and the creeps you’ll meet along the way.

You’ll manage your caravan via animated menus, dragging and dropping supplies from box to box, making schedules, things like that. Your actual mercs have personality, and assigning them jobs reminded me much of King of Dragon Pass and its more recent sequel Six Ages. It’s a balancing game of having the right skills for the right jobs, and of developing your heroes as masters of a specific skill, or competent with a few.

The key to engaging with a small squad management game is to emotionally invest in your guys. XCOM and Fire Emblem achieve this through permadeath. For Vagrus, this is mostly happening through the good writing. Though there are plenty of different ways to level up your guys, I never got the specific feeling I was honing specific masteries but rather, I was spreading out a bunch of chores in our little camping squad. Sure, I knew which guy used a bow and which guy fought from the front lines, but what they did never really matched up with who they are. 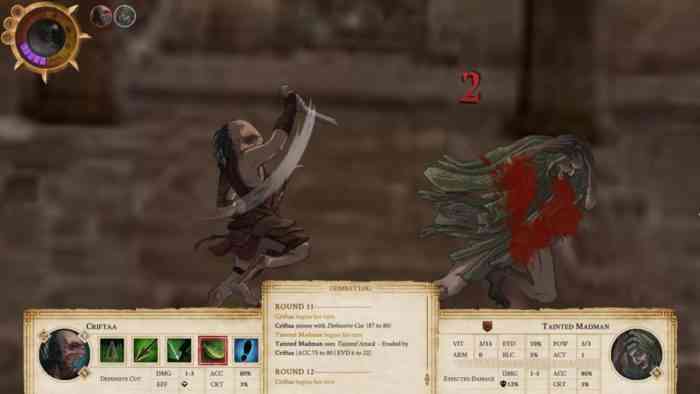 That’s the area where the ludonarrative dissonance of Vagrus kept me from fully engaging with it. There was the part of the game where I chose my words and negotiated my way through a dangerous fantasy world. Then it was like going to the arcade and playing a game about mercenary fights. Although the battles aren’t immersive, they’re still pretty fun. But you don’t get lost in them in the same way you do the story, so you’ll play the game in one mode only to have to completely shift gears. It’s not all that different from random encounters in certain old JRPGs, but it’s a gameplay mechanic I thought we had moved beyond, and I was a little surprised to feel so intruded on by the fights.

King of the Indies

The thing is, there’s not a lot of games in the style of King of Dragon Pass. There’s not a lot of games like Vagrus period. Even in the world of indie RPGs, it’s rare to encounter writing so rich, or such an original world. Vagrus is exactly what I hope to get from my indie games, ideas so original that I can’t quite articulate what they could have done better. With immersive music, stylish art, creative combat, and a sometimes baffling interface, Vagrus: The Riven Realms is what you’re looking for if you are tired of versions of the same game, over and over again.


Run Away and Join the Circus Electrique