Implementing humor into a video game is a difficult task. Although titles like Horace and South Park: The Stick of Truth manage to combine well-written comedy and strong gameplay mechanics, countless others have fallen flat. Paying homage to Kojima while adding a Zucker Brothers size helping of parody, UnMetal aims to combine influences in a laughter-filled adventure but will it hit the mark?

You step into the boots of Jesse Fox, a military veteran who tends to inflate the truth. Incarcerated, you must escape an enemy compound with the use of some good ol’ tactical espionage. As you sneak around the base, you’ll uncover plans of war, meaning that the weight of the world now rests on your shoulders.

Presented as a dual narrative, the story is told via flashbacks. As investigators question your account, you can choose a response that often results in hilarious outcomes. Fox’s knack for embellishing the situation materializes on-screen, perfectly combining humor and gameplay. Selecting modest answers usually results in circumstances becoming increasingly complex, making you consider the outcome of your response. Poking fun at a myriad of action movie conventions, UnMetal does an excellent job at using clichés for comedic value. Scenarios grow in their absurdity and never stop being entertaining, making this well-written escapade an absolute joy from start to finish.

Influenced by Metal Gear, stealth is at the forefront in this top-down adventure. Guards patrol the environment requiring you to survey your surroundings and proceed with caution. As you sneak towards cover, you will automatically hug the wall to stay out of the enemy’s gaze. You can take down foes with some close-quarters-combat, put them to sleep with chloroform, or go in all guns blazing. The latter will inform other guards, resulting in a swarm of soldiers racing to your location until the alarm has ceased. 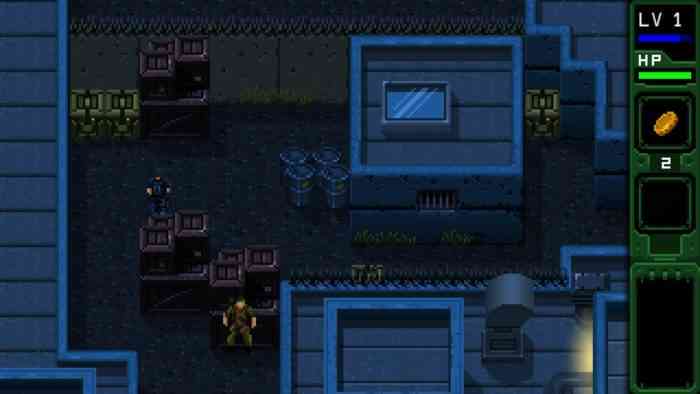 You will encounter a range of puzzles on your journey through the enemy’s headquarters. Punching the environment spawns items that you can combine to help you progress. The logic-based puzzles are quite simple but add variety to the gameplay. If you are struggling, you can call the Colonel via radio for a hint. Interestingly, the game wants you to learn from failing sections and alter how you play. At one point, I was sneaking past several guard dogs only to be called by the Colonel, which resulted in alarming the dogs and me becoming a chew toy! Due to this, I knew he was going to attempt communication, so I called him up to report my location and ventured through unscathed.

Sons of the Patriots

Boss encounters are introduced with a lovely retro fighter graphic. These battles vary in design and offer some creative sequences. You will likely take damage at these points and have to either bandage the wound, which will stop health depleting, or use a first aid kit to recover. Doing this takes a couple of seconds and leaves you vulnerable, adding a layer of strategy to fights. During boss fights, aiming your gun can be problematic. It is difficult to decipher where you are aiming and can often result in wayward shots.

Straying away from its influences, UnMetal includes light RPG mechanics. Performing particular actions such as stealth takedowns reward you with experience points. Leveling up will grant you the opportunity to select from two different abilities that will aid you in your mission. These vary and give you boosts to health, movement speed, and much more. 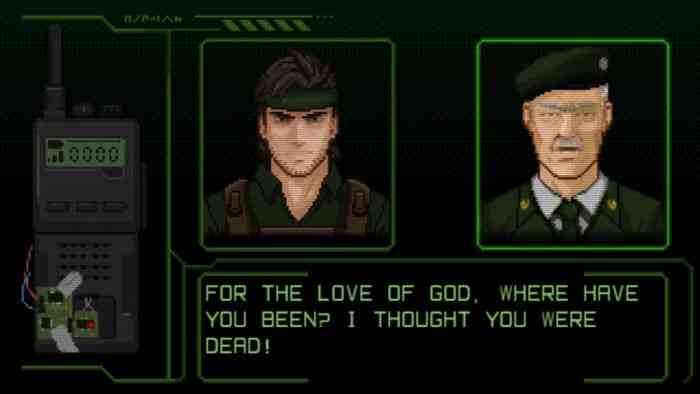 At a glance, the visuals look simplistic, but that’s not the case. UnEpic Fran has done an excellent job at being faithful to the source material while using modern technology to provide lovely landscapes and varied animations. The attention to detail is subtle but fantastic. Scattered throughout are boxes and canisters which capture the identity of its influences. Cutscenes add further personality to the game, with characters being brought to life through the stunning pixel art.

Surely You Can’t Be Serious?

Sound effects in the Metal Gear series are iconic, and UnMetal has perfectly emulated these to anchor the game in the genre. The espionage-themed soundtrack adds familiarity to the game but is highly conventional. A highlight is the voice acting. Delivered in a Leslie Nielsen-esque straight manner, the cast understands the purpose and delivery of the dialogue, which helps add authenticity to the game.

UnMetal is an incredible tribute to one of the greatest franchises in the medium. While the game pokes fun at the title and highlights flaws and silly elements, it’s clear that it is done with love and admiration for the series. Similar to how Mel Brooks lovingly rips Hitchcock apart in High Anxiety, UnEpic Fran does the same with Kojima. The varied gameplay and creative storytelling will keep you in hysterics throughout. Although some may find the retro gameplay a little grating, fans of Metal Gear and the stealth genre need to experience this side-splitting tactical espionage adventure. 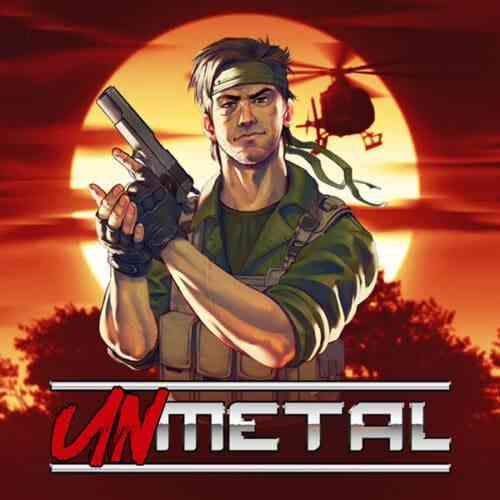