South Park: The Stick of Truth (Xbox 360) Review – Authentic Crappiness at its Finest

When South Park creators Matt Stone and Trey Parker approached developer Obsidian Entertainment 4-years ago to make a South Park role playing game, I doubt they realized how much of an undertaking it would be. There is no way they could have envisioned all those setbacks along the way. Despite the bumps in the road, Stick of Truth has finally arrived, albeit a tad late and perhaps missing out on a huge opportunity with its next gen omission. Not being able to play Stick of Truth on my PS4 or my Xbox One is undoubtedly a let-down and quite likely it is also a disappointment for others who have already taken the next gen leap. Many of my gaming nerd buddies have already packed up their Xbox 360s and PS3s. Well, all I can say to those folks is “shame on you” as you are quite possibly missing out on the definitive South Park gaming experience of our generation. Yah, it’s that good.

Stick of Truth puts you in the role of a new kid whose family just moved to the town of South Park. Shortly after your arrival, you meet some South Park kids who soon introduce you to Cartman and his KKK club. Yes you read that correctly as KKK happens to be the unfortunate initials of Cartman’s band of idiots. This club is a play on a Lord of Rings-ish capture the flag game where Cartman and his gang dress up in medieval clothing and do what kids do; that is role play. In their possession is the Stick of Truth which is just a crappy tree branch but to the KKK it holds the power of the universe. Early in the game, another group of South Park kids dressed as goblins snatch the stick. Naturally Cartman and his collection of South park misfits, including your character, embark a journey to get the stick back. Of course in typical South Park fashion, things go haywire and the hilarity ensures. From here it a series of gut busting fantastic moments paying homage to the South Park TV show which surprisingly enough has been around for almost 17-years. 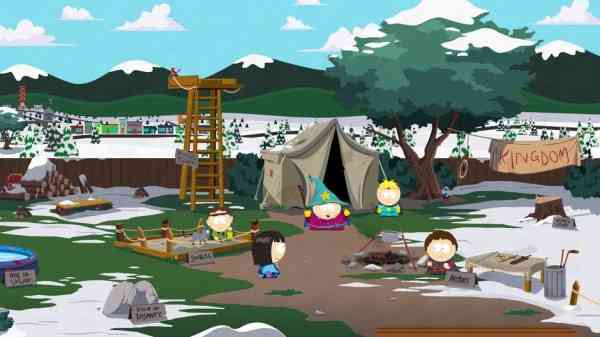 A Canadian court once described South Park as a “vulgar, socially irreverent program that contributes nothing to society”. You know what? That Canadian court was absolutely right. South Park doesn’t contribute much and it’s certainly not a show I could watch with my mom. The same goes for Stick of Truth. Stick of Truth holds up to the South Park name within the first couple of hours as African Americans, Homosexuals, Asians, the handicapped, those with speech impediments and even red necks all fall victim to Matt and Trey’s South Park brand of humour. In one instance, another character in the game was mocking my character for taking so long searching for loot while Princess Kenny was getting raped. You heard me – getting raped. Granted the episode did not end with any graphic rape scene but the dialogue alone had me spitting my coffee out in laughter and yelling at my fiancee to come and have a listen for herself. It’s so wrong in every sense of the word. But god dammit it’s so fucking brilliant and quite easily the best time I have had playing a role playing game.

Matt Stone and Trey Parker wrote the entire script and it shows. Not one little South Park detail is overlooked and there are so many references to the show its baffling. You are truly thrown into the world of South Park and not once did I feel like the development team cut any corners and misrepresented the franchise in any way. Yes it’s crazy offensive, but it’s what makes South Park so special.

Some fans of the franchise may be disappointed that they do not get to the play the game as one of their beloved characters. I have to be honest, at first I was a little disappointed but it only takes a few minutes to realize why Parker and Stone wanted you to be able to create a new customizable character as you enter the South Park world. Creating and customizing your own unique character added a level of immersion that was simply fantastic. Sure, I was at the butt-end of many jokes but this only added to the comedy. I felt thrown into a extended episode of the show and I felt like I was part of the world and that the choices I made had meaning and significance. 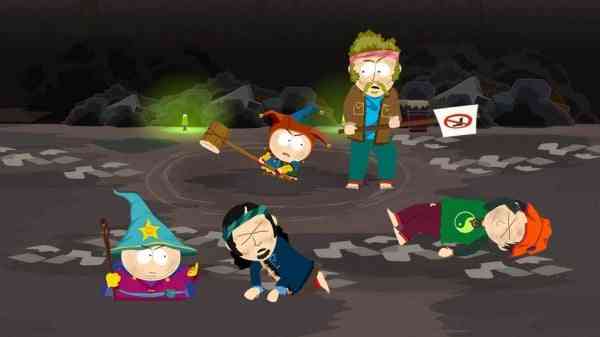 Before you start the many missions and side quests which play out like many RPG’s we have played over the years, you are asked to choose one of the following types of classes: Fighter, Mage, Thief or Jew. As much as I was tempted to go with the Jew class, I chose the fighter class. Soon after you are asked to select a name the entire process is proven to be just a waste of time as Cartman quickly names you as “Douchebag”. This is just a small example of the brilliance of this game.

You would think a South Park RPG would be bare bones in terms of depth and content but Stick of Truth is anything but. It’s crazy deep as the amount of upgrades to your weapons, health, consumables, add-ons, and equipment is impressive. The game also has a currency system where you can purchase goods as your characters earns XP and upgrades. The upgrades feel significant as well. Weapons progressively get better and more powerful as you plod along in the game. The game rewards you for searching and doing the side quests, so I spent a great deal of time tackling as many as I could. Far too many RPG’s contain pointless annoying side quest, South Park is not one of those games.

Granted there were occasions where I would get stuck and I found the game could have done a better job assisting me along the way. Perhaps the team could have even provided some more helpful tips in instances where I am clearly struck. In one such instance, I was stuck inside the school trying to get one of the hall monitors to give up a key. Once I switched my buddy from Kenny to Butters I was able to get the key from the kid then I was able to proceed. I felt so stupid afterwards but this was not the only instance where I got a little stuck in the game. 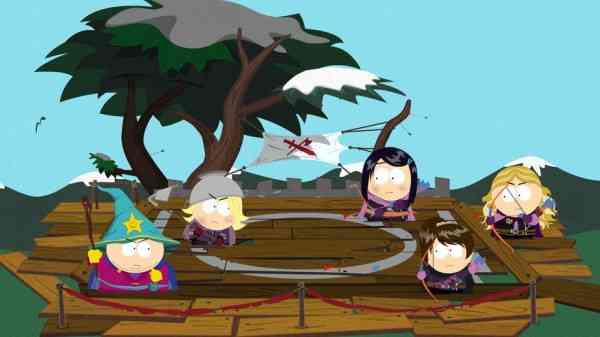 The combat in Stick of Truth is turn based and much like choosing your own character I had to warm up to the idea at first. Yet after only a couple of battles I realized there is a turd load of strategy involved. Defeating a Hobo for instance is actually quite rewarding and satisfying. Same goes for taking down a gang of little bastard children or a pack of humping wolves. Once you learn to utilize your powers, plan your strikes and correctly time your defence, the combat is a hoot and quite addicting.

Visually the game is nothing special in many regards. In fact, it looks crappy but this is purely intentional as Stick of Truth absolutely stays true to the franchise in every way. The construction paper cut-out characters look exactly like their TV show counterpart. The game, in its entirety, looks and feels like the show. Stick of Truth is colourful and vibrant. Likewise, the music and sounds of the game is spot on. It is authentic sounding in every sense of the word.

Matt Stone and Trey Parker wanted to make a game worthy of the show. Well guess what douchebags, they did all that and more! Stick of Truth is not only an excellent complement to the long running hit TV show it is simply a fun game. It is deep, has plenty of replay value and a game you could easily sink 50 plus hours into. Stick of Truth is not for everyone. If you offend easily or just don’t get South Park humour you are best to stay with your Skyrim game. Yet if you want to have a fun time, laugh your ass off and feel like you are living in an extended episode of South Park, then look no further. Stick of Truth is for you.

Next Resident Evil 4 Ultimate HD Edition (PC) Review – A Design That Still Holds Up, Even After 9 Years
Previous Rayman Legends (PS4) Review – If it Ain’t Broke Don’t Fix it