Beginning life on the PC, it has taken over 15 months for the indie sensation, Horace, to hit the console market. Armed with a suit, a bowler hat, and enough references to make Seth Macfarlane weep, can the wide-eyed, loveable robot attain the same level of success when it releases on the Switch?

Horace is a mundane robot who enjoys the simple things in life that we, the audience, can relate to: video games and television. Being raised by a wealthy family that features some wonderful and wacky characters, Horace starts to develop, learn, and feel attached to those around him – his family. After being tasked by his creator to clean up one million pieces of junk, tragedy strikes and turns his world upside down. You must now guide Horace in an epic adventure to reunite his family.

The fact that the premise sounds like an 80s sitcom is most likely intentional as the influences of the developer, Helman, and Scaplehorn, are present throughout the game. From Outrun and Track & Field influenced mini-games to the cast of Seinfeld and Friends pottering around environments, Horace is truly a love letter to yesteryear that children of the 80s and 90s will fall head over heels with.

Separating itself from other cutsie platform adventures, Horace is full of personality. Too regularly, protagonists in the genre are devoid of character. Here, every character has been designed to develop the overarching narrative. Whether their intent is to amuse or bemuse, there is reason for their existence which makes the world that Horace inhabits intriguing and captivating. Featuring some lengthy cutscenes, the game’s focus on the story is refreshing for the genre. The witty and charming dialogue is rooted in British comedy which will delight natives. Although some jokes may fly over the head of non-British players, the majority of the comedy will land, leaving you giggling during your time on this epic adventure. 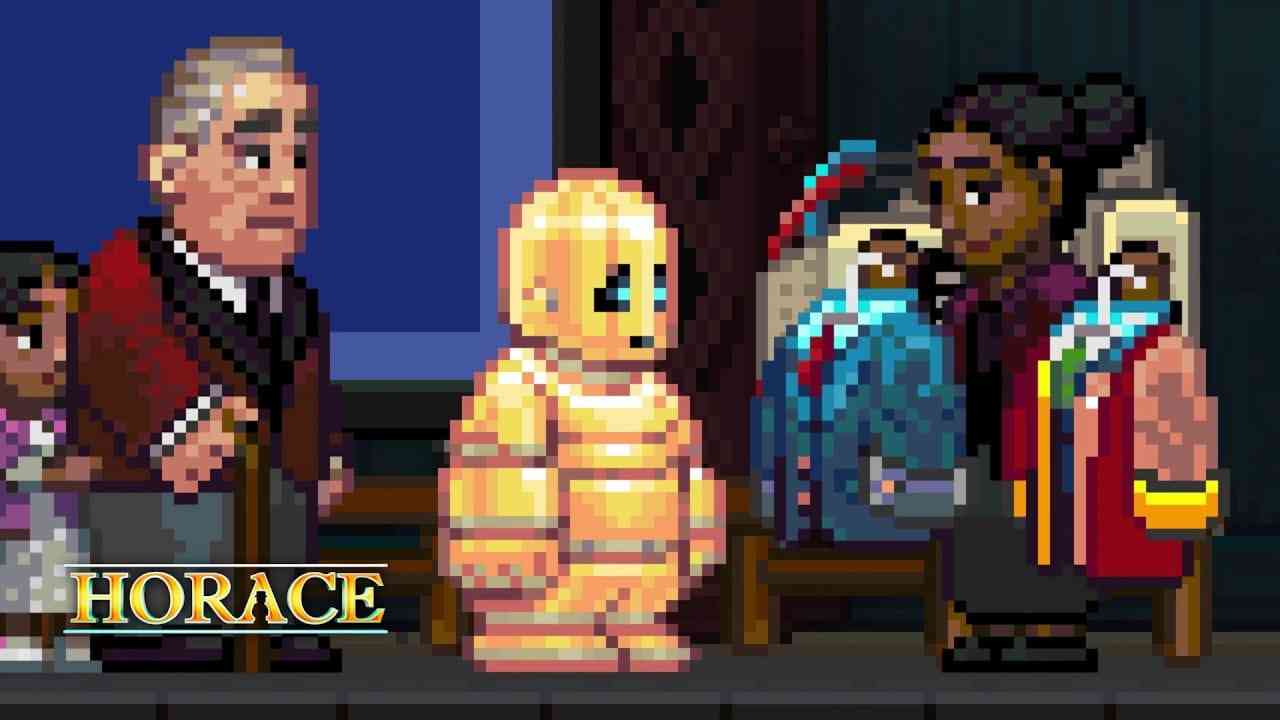 Focusing on gameplay, Horace is a platform adventure. Throughout its 22 chapters, the game continually develops and alters to make each moment exciting and different. From stealth sections, where you avoid the Metal Gear Solid-esque cone vision to gravity shifting levels that allow you to traverse walls and ceilings, Horace consistently surprises through its remarkably long playtime.

Some areas require skill and expert timing to complete, which may deter some gamers. If you are hit once then the section restarts. However, after continually failing (yes, this did happen to me) you are granted the ability to take an extra hit to make it through particularly tough areas. Although this is nothing innovative, I do prefer how the assist is implemented in Horace than in a lot of other platformers. For example, in a game where you play as a mustachioed plumber, upon failing you are offered an item that simply removes all the difficulty, whereas in this, a little support is given to get you through some complex and tough sections.

A Link to the Past

8 and 16-bit games have a special place in most gamers’ hearts. Recently, a slew of indie titles has attempted to pull on those heartstrings in order to evoke feelings of nostalgia when playing their game. Some titles have succeeded and others have failed. Horace, however, successfully embodies the heart and soul of games of that generation. Maintaining the aesthetics that are synonymously linked with that era, helps to summon memories of the past.

Musically, the game shifts from polyphonic renditions of orchestral classics to tripped-out versions of well-known themes. All of which adds to the absurdity and hilarity of the game. The dialogue is from Horace’s point of view and even though it’s often hilarious, this could irritate some gamers. As he is a robot, the dialogue has that weird text to voice sound on each scene. Whilst this makes sense from a narrative standpoint, it can get a little annoying as it’s present in every scene.

Horace is an incredible game that is packed to the brim with content and character. Although it’s steeped in nostalgia, it can hold its head high on its own merit as a great platform adventure title. With tight controls, varied gameplay, and a fantastic script, those who didn’t get to experience Horace before should definitely check it out on the Switch.

*** A Switch review code was provided by the publisher ***