I love tabletop roleplaying games. I don’t mean that as hyperbole; I think TRPGs are some of the most fun you can have with the right group of people. Just as boundless of my love for TRPGs is my trepidation for TRPG humour. Often, it’s woefully unfunny, so self-conscious and self-deprecating that it comes across more as an outsider’s view than knowing, good-natured ribbing. Unepic had me interested, but wary.

Unepic tells the story of a 20-something guy who, while going to the bathroom in the middle of a D&D session, finds himself transported into a castle full of traps, monsters, and magic. He soon acquires a guide of sorts in the form of a spectre that attempts to possess him but only succeeds in trapping itself in his body. He learns that the castle is ruled by some sort of dark lord, and figures he must be here to slay the dark lord, operating under those all-too-familiar genre conventions. With this “quest” in mind, the game proper begins, and the player begins exploring the castle.

The game controls very well, and any veteran player of side-scrolling action-adventure games will quickly understand how things work. The functions of all the buttons are clearly laid out, and if you don’t like how it’s set-up, you can remap it to suit your particular tastes. I was immediately grateful for the 16 hotkeys provided for items, spells, and skills. It makes quickly switching between a variety of playstyles easy, which in turn makes it fun to use all the options the game throws at you. I cannot count how many times I’ve picked one method of playing a game and stuck with it the whole way through because I didn’t want to go digging through menus for situation-appropriate items.

However, after only a couple of hours, I was sick to death of the combat. The AI is totally rudimentary, with enemies either charging at you and never giving up, or patrolling set routes and not taking notice of you even as you stab them to death. The game also has difficulty balancing the number of enemies engaged in a fight. Because you can easily stun-lock most enemies, one-on-one fights are trivial. On the other hand, because you cannot damage (and stun-lock) multiple enemies at once with basic spells or attacks, once you get more than 2 or 3 aggressive enemies after you, you have little option but to run away. There is no block or dodge mechanic, so when facing this situation, your only option is to kite them around with long-range attacks. Some later abilities allow you to deal with multiple enemies at once, but by that point I had no interest in combat. Because it’s so easy to exploit the enemies’ AI and pathing, I spent the later parts of the game running past enemies whenever I could. 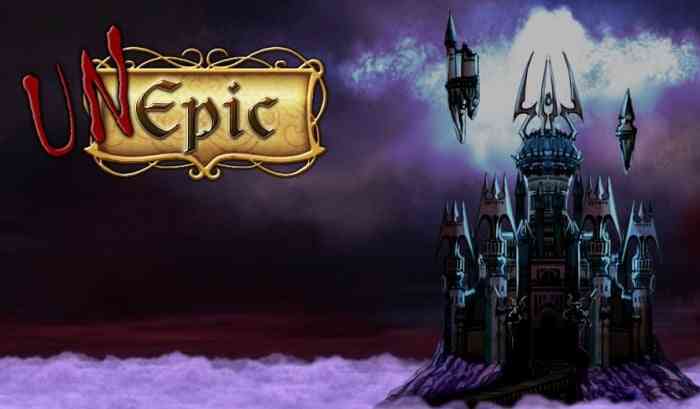 True to its dungeon-crawling RPG roots, it’s in the exploration that the game really shines. There are loads of optional paths, secret rooms, sidequests, and challenges. As you explore the castle, you discover shortcuts back to a central hub area, which ensures that trekking through the castle doesn’t become a total chore later in the game. Unepic runs about 15-20 hours, more if you’re completing all the sidequests and challenges. It’s a little long, but the steady stream of new areas at least keeps travelling through the castle interesting.

“There’s really no way around it: Unepic is not very funny.”

Unepic leans heavily on the player being familiar with the genre, but for a title like this, that’s to be expected. The character design and general aesthetic of Unepic are very generic fantasy, but this was no doubt done on purpose. The darkness of the castle makes enemies get lost in the gloom, but this pushes you to be very cautious when first exploring an area, calling to mind the paranoia of classic dungeon-crawlers. The sound design is adequate, with serviceable music and sound effects, and surprisingly good voice acting.

Unepic is as much a comedy game as an adventure game, so we really have to talk about the humour, which is where things get unfortunate. There’s really no way around it: Unepic is not very funny. A big part of that lies in its protagonist. He’s a douchey gamer-bro whose bad jokes and unpleasant attitude drag things down. Every time something you come across something interesting or unusual, he chimes in with his inane opinion, ruining the moment. There are also instances in which a character from some pop culture property will just show up, for no other reason than to be there. You’re wandering through a trapped corridor and then there’s Admiral Ackbar shows up to exclaim “It’s a trap!” You climb down into the sewers, and Zoidberg goes whooping by. It’s jarring, and not funny. 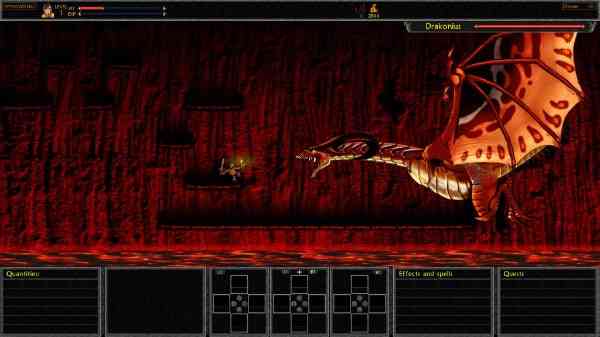 The comedy crosses the line from unfunny into uncomfortable whenever the game tries to make a joke regarding matters of race, gender, or sexual orientation. In the most cringe-inducing sequences in the game, the protagonist meets a black man. He cluelessly exclaims “An African warrior?! What are you doing here?” Then, in the very same room, he encounters a faerie selling magic gear, and starts making awkward, creepy sexual advances towards her. Later in the game the player meets a caricature of a jewish banker, and a small asian boy. These exchanges are equally bad.

In the end, whether or not you enjoy Unepic will depend on whether or not you enjoy reference humour, and if your enjoyment of the exploration outweighs your frustration with the mediocre combat. Depending on which platform you’re buying it, the game costs anywhere between $9 and $15, so if Unepic sounds like something you’d be interested in, you may want to give it a try. Otherwise, this is one quest you’re better off skipping. 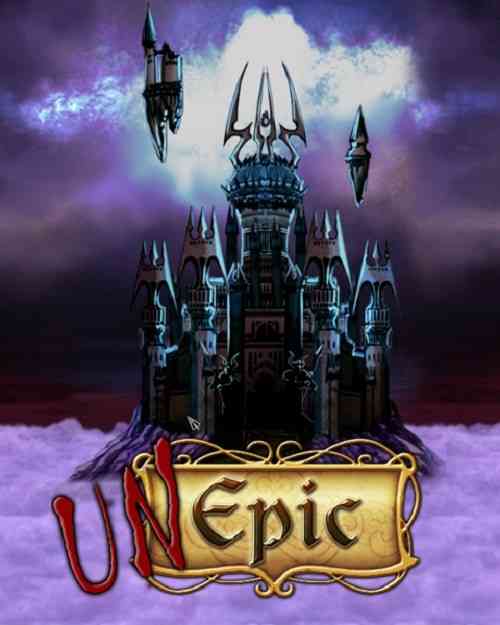 Publisher: A Crowd of Monsters