Turok Remastered Review – The Dinosaur Hunter is Back, and He’s Still Dino-mite

Anyone old enough to have owned an N64 console will have many fond memories of Turok: Dinosaur Hunter. Released by Acclaim in 1997, it was the first third-party title for the console, and it set a new standard for what the cartridge-based system could offer players. I personally remember having a blast playing Turok for many, many hours back then with my college roommates (often sober!), and I was thrilled to hear it was being re-released on Steam. However, not having played it for close to 20 years, I did wonder how well the old game would hold up after all this time. My fears were soon wiped away, though, when I fired it up and began to play it. Turok Remastered is a fun game that still has the power to pull you in for hours, even in 2015.

Being a Steam game, Turok can be played using the Steam Controller, and I highly recommend this if you plan on trying it out. This is a First-Person Shooter, but it has a lot of platforming elements as well, and it really needs a controller to get the full experience. In Turok, you are a Native American warrior who finds himself in a strange world in which he must make his way through levels, fighting human and non-human enemies, to collect keys and move on to new areas. If you have never played Turok before, you might find the game’s name misleading; this is not a Monster Hunter-style RPG where you battle epic dinosaur bosses. Think more like Doom, but with adventure elements thrown in, in which dinosaurs are some of the many various enemies you must stab, shoot and blow up as you move though the environment.

“Turok Remastered plays to all the worst addictive aspects of the FPS genre, keeping you running for that carrot on the stick, and fiending for the rush of a new upgrade.”

The pace of Turok is fast, and you have to keep moving always, or you will be killed by any number of enemies who relentlessly come at you, shoot you from afar, or toss explosives at you. After only a few minutes, I found myself hooked on the frenetic and exciting action of the game, just like I was back in 1997, running around and taking out bad guys and collecting rewards like health boosts or new weapons. Turok: Remastered plays to all the worst addictive aspects of the FPS genre, keeping you running for that carrot on the stick, and fiending for the rush of a new upgrade. And you get these fairly regularly, so although you start the game as a weak knife-wielder, after not too long you find yourself in possession of some pretty awesome shotguns, gatling guns, grenades and other, even crazier weaponry. That includes finding pieces of the mysterious Chronoscepter, a powerful weapon whose pieces you find scattered here and there in the game’s levels.  You’re never satisfied playing Turok – there is always the promise of something even cooler around the next corner, and I loved that.

Turok “borrows lovingly” from Doom, but it is no clone, as some have suggested. It takes the base concept and makes it so much more, with platforming, climbing and multiple layers of vertical depth that make for some very satisfying exploration and secret-hunting. Little bonuses, prizes and boosts hide in the nooks and crannies of Turok’s levels, giving you always the incentive to look up, side-to-side, and behind the trees to try and discover as much as you can. There is always an exciting tension when you play this game, in which your urge to keep moving fights against your curiosity to know all the secrets a level holds. 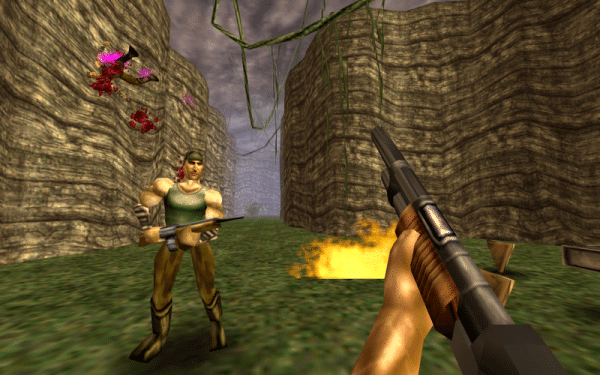 Graphically, I expected Turok to show its age. And it does, for sure – this is a game made nearly 20 years ago, after all, so yes, visually it is made up of crude polygons and basic textures. This is not up to the visual standards of today’s latest-gen games. But considering how old it is, it isn’t nearly as dated as I expected. Turok pushed the graphical capabilities of the N64 to its limits back in 1997, and it still looks not bad now. That might be helped by the tweak that the game has gotten on its re-release. Whatever the reason, I got used to the look of the game pretty quickly, and it was never distracting.

In an old game like this, one of the biggest graphical complaints is often the repetition of environments – it’s fun to explore a level once, maybe twice, but when you are running through the same environment for the eighth time, you lose patience. Turok stood out from its contemporaries by changing up the environments to keep the game fresh and interesting – you start off in a jungle, but you move on to caves, catacombs, water levels, and other areas. And I was always amazed at how well-paced the transitions were – the developers seemed to know the exact moment when you might get bored of an environment, and that’s when you moved on to something new.

And the sound in Turok is a real standout aspect of the game. A pulsating jungle-beat relentlessly serenades you as you begin the early part of your journey, and helps to immerse you in this savage, yet fascinating world. Later, haunting, well-composed music punctuates the change in environments, as you move from the greenery of the jungle to the darkness of caves and the mysterious worlds beyond that. There were times when Turok felt more like a survival horror title than a FPS adventure, as I stalked through dark tunnels and jumped at the sound of distant screams. Between the visuals and the music, this is one of the most atmospheric games I have played. 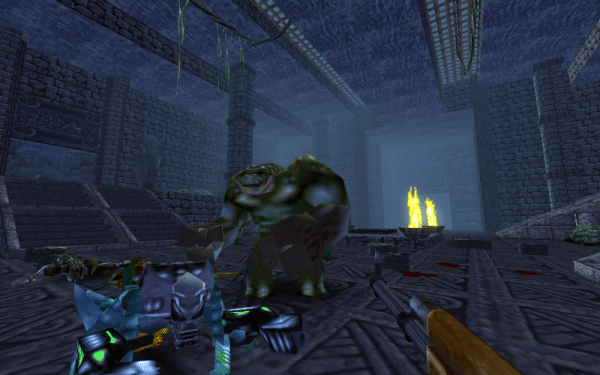 Like you also might expect, Turok is a difficult game. As I mentioned, you start out weak, and without a Tutorial, so there is a learning curve at first in which you will die a lot. The game also has a very unforgiving save system, where you can only save your progress at certain designated points, and the first of these is pretty far into the game. You could, in theory, play Turok for close to an hour without being able to save. This will frustrate some newcomers to the title, and for some it will even be a deal-breaker. But because the game is so well balanced, you learn after not too long what the game expects from you.  Getting the feel for the excellent, tight controls and the weaponry you find, you do get better, and this makes that first save point feel like a huge accomplishment. My advice to newcomers is to stick with this game until you make it to that first milestone, because after that you will be hooked.

These days, gamers can be forgiven for getting cynical when they hear about “rereleases” and “remasters” of old games. Too often, companies bring back titles merely to squeeze a few more dollars out of them, and prey on people’s nostalgia to suck them in. But Turok Remastered is one retro title that still holds up, even after nearly 20 years. Whether you remember it from way back, or you are just discovering it, you will be surprised how easily you get pulled into the fun. My only criticism is maybe the price – at $19.99 US, it is a bit expensive for the length of the campaign, which is probably 10 or so hours for most people. This game really should be priced at $5.00 – $10.00 at the most. But even at the current price, I recommend Turok Remastered; fun, fast-paced and full of ass-kickin’ action, this is a straight-up Jurassic classic that everyone should experience. Happy hunting… 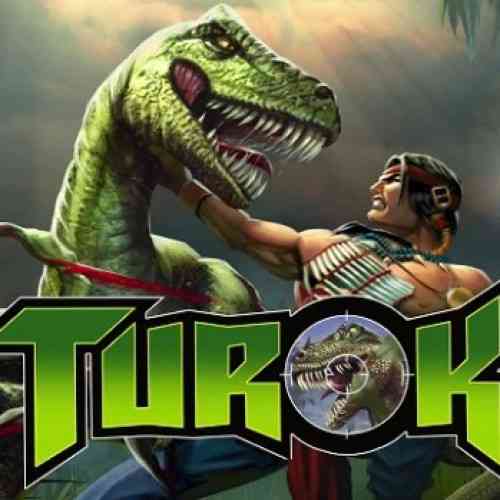 The Overwatch League Has Officially Returned In Its Fifth Season
Next Game of Thrones: A Telltale Games Series Review – A Successful Exercise in Futility
Previous Questria: Rise of the Robot Skullfaces – It Both Fails and Succeeds at its Attempt to Deliver