Questria: Rise of the Robot Skullfaces – It Both Fails and Succeeds at its Attempt to Deliver

Developed by a small team over three years, Questria: Rise of the Robot Skullfaces originally launched on the OUYA and was subsequently released on Steam’s Greenlight campaign. After many changes in the development cycle, it ended up as a dungeon crawler set in a magical world. Accompanied by colorful screenshots and a hilarious name, I went into the game expecting a fun ride filled with quirky moments and decent dungeon crawling gameplay. And while the game fails in many aspects, it also succeeds in keeping both the gameplay and any sort of plot simple and straight to the point. It doesn’t bother the you with story exposition or a long tutorial, but instead throws you right into the action where you find yourself hacking and slashing your way through skull-faced robots! 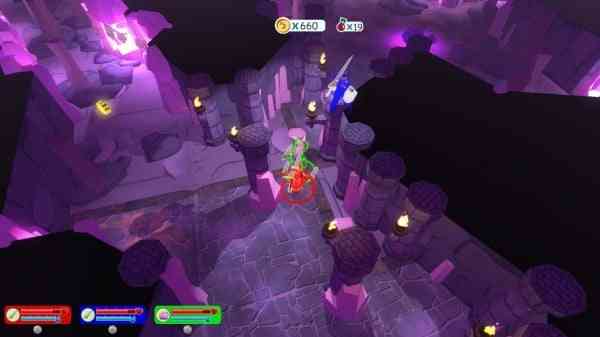 Questria opens with a very quick tutorial that teaches you the basics of sword and magic attacks, as well as a cheering system that is used in co-operative play to both revive and boost your allies’ special abilities. When playing in co-op, the action on-screen can get a bit hectic, and it is hard to see what is going at times. Alternatively, you can recruit AI companions that stay with you on an adventure to free prisoners and defeat skull-faced enemies. There are a few different types of enemies that mostly consist of sword and shield variants as well as the occasional runner type that comes in packs but lacks any armor. You can use simple hack and slash moves or ranged magic attacks to take down your foes. Additionally, there’s a dash ability that allows you to zoom past enemies to get on the other side of them. This tactic seems to work best as the skull robots spawn from a black hole in the ground and run at you and your companion. Going on two different sides and setting up an attack forces these robots, who spawn in waves of three, to spread out and become more vulnerable to attacks.

Even with its eye-catching art and a bubbly soundtrack, it needs a deeper combat system in what tools you are given, mainly in its lack of a parry function

The game has a Dark Souls vibe to its gameplay wherein death for your party means being booted back to the start of the level. Enemies also have a Dark Souls feel to them as they trigger slow moving but powerful attack animations when the you get near. This forces you to play tactically and plan your strikes. Overly aggressive friendly AI tend to die a lot when rushing enemy spawn points or they can simply get stuck behind a wall of enemies that you cannot break through, so be forewarned. You can also buy health potions from a vendor with coins collected throughout the dungeons or you can revive teammates with the cheering system. Many of my deaths were not because of the lack of health potions, but instead the lack of a parry button where I could aim at enemies instead of having to attack and then run away to then aim my reticle again. The developers did include a ‘stand still’ command, but it fails to function when multiple enemies attack you. 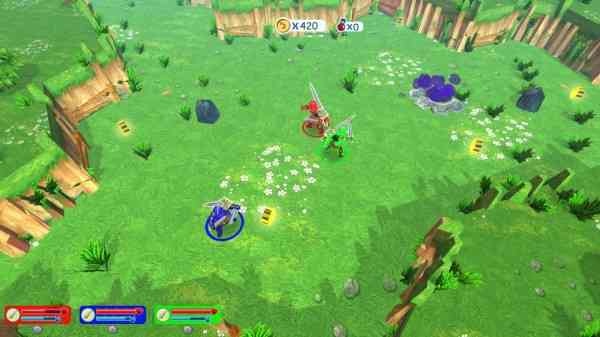 The missions are set up as simple objectives to save prisoners that are located on the black-hole spawn locations of the skull robots. It may be the Assassins Creed fan in me that noticed a possible reference as I managed to save a prisoner named Altair from a Syrian-like castle. Some moments of the game seem to break the ‘immersion factor’ when you save multiple prisoners with the same names and character models. Questria has decent looking environments outside of the dungeons, as the latter suffers from repetitiveness and hampers the experience a bit. The musical score consists of whimsical melodies and light-hearted jingles that are appropriate when throwing magic spells at zombie robots.

Questria: Rise of the Robot Skullfaces has a consistent design philosophy at its core, even though it seems to mimic From Software’s Dark Souls and Bloodborne games in its unforgiving death penalties and enemy behavior. Its gameplay loop though is nowhere near as satisfying as those games, but it does offer a similar simplistic approach to combat. Even with its eye-catching art and a bubbly soundtrack, it needs a deeper combat system in what tools you are given, mainly in its lack of a parry function. In the end, Questria both succeeds and fails in its quest to deliver a solid dungeon crawler

***A Steam Code was provided by the Publisher for review purposes*** 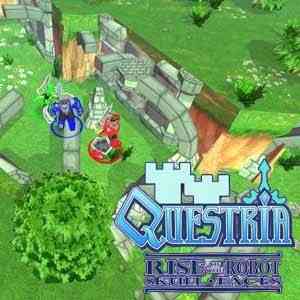