They Are Billions Review – The Horde Arrives on Consoles

They Are Billions Review

Once upon a time, real-time strategy had the gaming marketplace in a stranglehold and, more to the point, occupied an awful lot of my time. Starcraft, Warcraft, Command and Conquer, stole whole days of my life as I waged war on various aliens, orcs, and Soviets as a youngster and, inevitably, well into my adulthood. I’ve always loved dabbling into the RTS whenever I craved a deep time suck and that’s where I came in contact with They Are Billions. TAB takes your traditional RTS and throws zombies into the mayhem because literally, anything could make use of zombies! They Are Billions is a difficult and fun blast for RTS veterans while only mildly suffering from some port control issues.

Set in a steampunk world where humanity has been crushed by the zombie hoard that brought about the apocalypse, you start with a command center, four rangers, and a soldier armed with a machine gun as you try to build a colony to help restore the human race. From there, you build your homes, your resource collectors, your barracks, etc. until you become a thriving community. As you work your way through, research trees help grow your colony as you upgrade your troops and buildings. As you work through the tree you can upgrade the buildings you currently have built which is much handier than destroying and rebuilding everything like I did the first two games before I realized this fact…

As you may have figured out, this is pretty standard fare for an RTS, so TAB adds a couple of different options to make it stand out. First, let’s talk about the big thing in the zombie horde. Throughout the map are sprinkled pockets of the undead, the amount of which you can choose (more on that later), so exploration is perilous if you’re not sending out a full detachment. There is also a timed raid on your base by the zombies where a huge swath of them will throw themselves at your colony, looking to crush the living remnants of humanity. If you’ve got your defense up, these attacks can be stopped before they become a problem. However, if they manage to break a wall down or you don’t have enough walls up, the zombies will begin running amok in your village with another little touch Billions uses to set itself apart. If the zombies manage to turn any of your buildings, the hoard grows. I had a handful of zombies breakthrough but they got to my cottages and before my troops could move in and quell the dead, the hoard had grown 10 fold. The growth of the hoard as they raid your buildings to make your plans for defense so much more important and ensure you always need to be on your toes.

The other thing that TAB uses to keep it from getting lost in the mix is your ability to curate your own gameplay experience. The map, the population size, the length of the game, the amount of undead, all of the gameplay options are in your control. Additionally, the options are also responsible for your score total in the end. Which, you know, isn’t a problem if you put your game options together and you see that out of 300%, you have a score bonus of 3% instead… my ego definitely didn’t have me cranking the difficulty up and regretting it almost immediately. Because when it boils down to it, They Are Billions is not for the novice. Even the easiest options are hard and I mean really hard. It took at least 7 or 8 games before I even managed to get to the end and honestly, I barely came out alive when I did. I don’t know about the rest of you RTS players out there but a game that doesn’t let you get bored by working through the difficulty rankings was refreshing! I mean, super frustrating, but very refreshing. 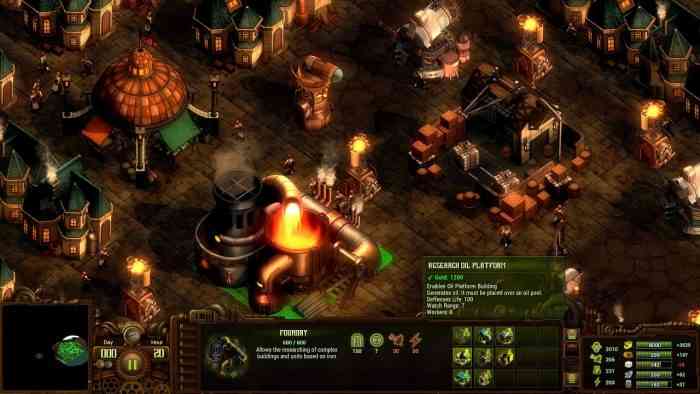 While playing, I often like to look for things that annoy me or things that affect the gameplay and honestly, They Are Billions had very few things to pick at. The graphics are far from AAA but the art style is great. The music choices are subtle until the hoard is on its way and then it sets you into a sense of panic as they close in on you. The only thing that really seems to suffer in the game is the controls. I played this port on PS4 and they actually still had the hotkeys set up for the PC version. While it wasn’t the worst controls I’ve ever had to deal with, the PS4 controller just isn’t a mouse and keyboard and asking me to hit enter for quick access to certain menus isn’t exactly helpful. So while I’ve dealt with worse, the PC controls on PS4 was definitely not the most functional way to play this game.

Overall, They Are Billions is an absolutely solid pick up and a real steal for its price point. It has a great aesthetic, solid gameplay, and a difficulty curve that is as impressive as it is aggravating. The only real drawback that I found was the PC ported controls that aren’t exactly designed to make PS4 gaming a breeze. If you want to test your steampunk mettle against an almost endless hoard of the undead, They Are Billions scratches that base building itch as well letting you live out your fantasies of fighting zombies. As long as you’re really, really, good at both, you’ll have no trouble with this one! Even if you’re not, this is one that is well worth the time and punishment.