Video games have continually progressed at a rapid pace ever since they were a thing. From the earliest of games to 4K gaming, retro games have always held a special position in many gamers and non-gamers’ hearts alike. Despite not appearing as realistic or featuring contemporary features, there is just something an old favorite, whether they stand the test of time or not. 198X aims to feed on your sense of nostalgia, with a variety of gameplay stages akin to some old classics you may have previously enjoyed.

In 198X, you are placed in the role of Kid, a high school student struggling to fit in with society in the city of Suburbia. Over time, Kid discovers an arcade in the basement of a factory, filled with other like-minded individuals. It is through this narrative that a story is woven about Kid’s view of the world, teenage feelings, and the discovery of video gaming. As a whole, the narrative only loosely ties together, and in the end, does not really feel like a complete narrative. While a sequel is planned, it may be hard to continue a story that does not get very far, to begin with, and the story itself is essentially a sequence of ordinary events mildly tied together with some gameplay.

The premise of the gameplay in 198X is quite simple, and is reiterated in its trailer: “beat-em-up… shoot-em-up… racing… ninja… RPG”. Yes, 198X features all four of these classic-styled game modes based on games you may be all too familiar with such as Streets of Rage or Outrun. Essentially, these five genres are all represented in their own game modes that occur throughout the game. The games are about what you would expect of a retro game, and the controls are simple enough for anyone to hop in. Unfortunately, a combination of unadjustable difficulty levels and a relatively high variance in difficulty between genres make for an unsmooth sequence.

The various stages themselves are pretty fun, with my personal favorite surprisingly being its RPG stage. While the stages themselves are fine, they left me wanting more in a negative way. 198X gives you just enough to get you interested before cutting away to the next sequence. Despite the levels being enjoyable, they were quite shallow in that they would be what you might expect from the opening level of their respective games. It would have gone a long way if the various genres were built upon in more meaningful ways, or implemented better within the story. 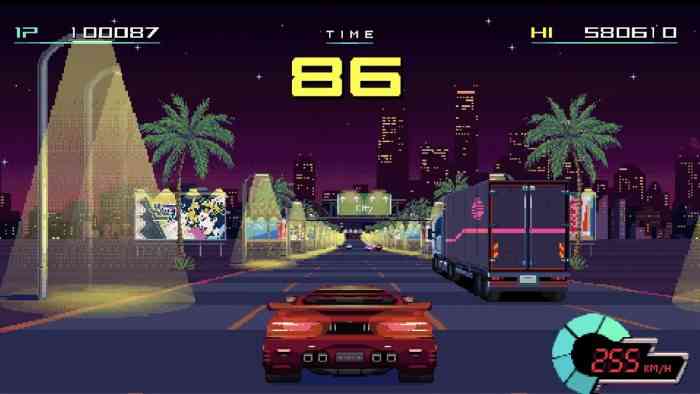 198X looks awesome, simply put. The graphics and the overall atmosphere of the game ooze the nostalgia that the game is selling. From the pixel art in-game to between sequences, and everything in between, the game looks as it is intended to. Aside from the actual art style, the arcade scene and overall aesthetics such as the bright neon colors also help in setting the tone. The game’s audio was relatively well done also, though I found that the volume of the voice acting was a bit inconsistent. While the soundtrack played at a nice volume, I found myself having to turn up the volume to hear the voice acting between levels. Despite that, the overall music was also fitting of the game and was a pleasant accompaniment to the gameplay.

While 198X did not quite live up to expectations set by its undeniably awesome trailer, the game has displayed a dedication to what it set out to do. Though its narrative at times felt more like a method to which to introduce the various levels, it definitely left me wanting to learn more about the world. Similarly, the game’s relatively shallow stages made we wish that they had been more fleshed out. Sitting at a playtime of somewhere between one and two hours, 198X gives players a glimpse of the retro-inspired world that the developers have crafted, leaving players wanting more of what they got.