The Pathless Review – An Epic Journey

The Pathless is More Than Above Water Abzu

Ever since the release of Journey back in 2012, there’s been an insatiable appetite for whimsical, exploration driven adventures set in a magical and awe inspiring landscape. Giant Squid’s Abzu was one such effort, and one of the more successful at that. The Pathless follows a similar formula, but replaces the relaxed vibe of Abzu with one of tension. The world is in peril.

To lift the curse and rescue the island, you must become the Hunter. It’s hardly a unique basis for a story, but to string The Pathless up based on that would be like disregarding a sandwich because it happens to be made using bread. In reality, you’ll want to take a look at the whole sandwich before deciding to get soup instead.

Much like other games in this vein, The Pathless is more interested in showing than telling. Dialogue and written exposition are limited to enticing tidbits from the ghosts of past residents, leaving the bulk of the world-building to visual and auditory delivery.

Stunning isn’t a strong enough word to describe the environments of The Pathless. Though characters are flat shaded, the world itself is brimming with detail. Running through a patch of flowers leaves a trail of pushed over stems, while rain dances across any surface it touches. It’s absolutely gorgeous, and buttery smooth in motion. That perfect smoothness encourages players to try and maximize flow between motions. The camera smartly trails the Hunter with lazy, dramatic pans across the magnificent landscapes. Every location I stumbled into had a real sense of place, as though an untold history had been lost to time. Small snippets of text – echoes from the past – punctuate the most intriguing of locations, further building a sense of wonder. It’s really well done.

Equally important to the overall feel of the world is the music, written by the outstanding Austin Wintory. The soundscape is minimal in general in The Pathless, making every instrument, and every note, that much more noticeable. It has a sombre tone that really suits the game, with borderline Celtic string sections giving way to tribal drum beats as the action picks up. In boss encounters, the music feels straight out of an Indiana Jones film. It tonally matches each action beautifully, guiding the player’s emotional state just as much as the visual presentation. 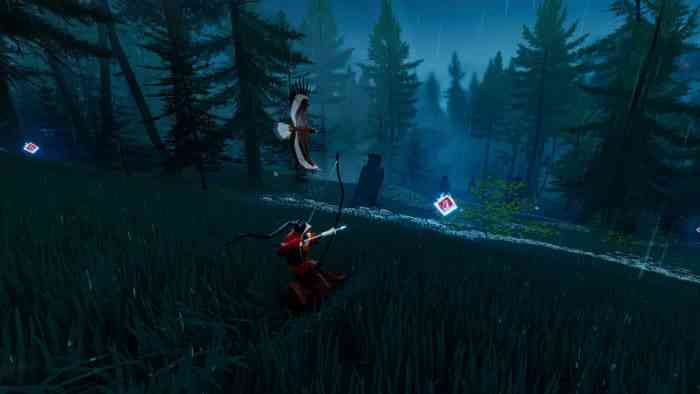 If you’ve seen trailers for The Pathless, you know that movement and mobility are big components of the game’s mechanics. Each of the world’s plateaus is gargantuan, with points of interest often being vast distances apart. Thankfully, moving around is a joy. On the ground, the Hunter can use her bow to strike floating targets strategically placed around the map, generating energy for her to dash. Lock on is automatic, so it’s easy to get going, but mastery of the dash is another story. Shooting target while in midair gives the Hunter a height boost, and timing is everything if you really want to feel the flow. There are spots where you have to nail 4 or 5 targets in perfect succession to get the height you’ll need, but fortunately those spots have alternative, easier paths as well. For a game with no points and few rewards, I felt oddly compelled to take the stylish path whenever possible.

In the air, the Hunter uses her Eagle buddy to glide or to flap and gain height. Gliding alone is fun, but combining the ground and air traversal is where things really get going. You can drop out of a glide, shoot a target for the speed and height boost, and then resume gliding for maximum distance. With some practice, getting across the entire map can often be a single, fluid string of moves. It’s not complex mechanically, but there’s just enough of a knack to it to feel a ton of satisfaction when you get it right. 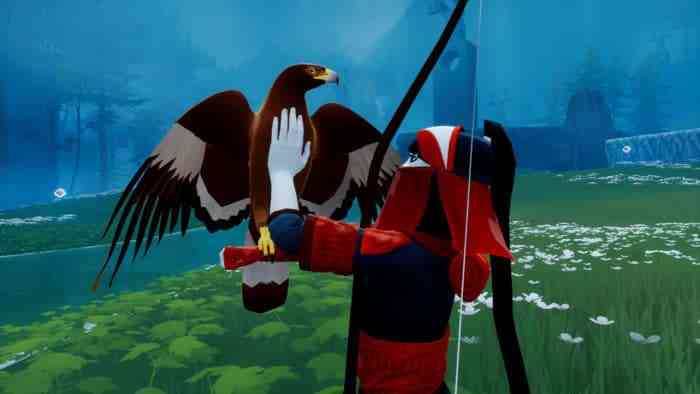 When you’re not traversing, you’re usually puzzling. The Hunter uses her bow extensively to light flames and shoot through rings, gathering totems that unlock obelisks. The puzzles aren’t terribly challenging, and that’s a good thing here. The Pathless is about experiencing the world, and putting up artificial difficulty barriers just isn’t its thing. Sadly, the puzzles can get pretty repetitive after a few hours despite a few twists to the formula. I still had fun doing them, but any downtime or figuring out was at a bare minimum by hour 4.

More repetitive than the puzzles are the stealth sections. A red storm roams each one of the plateaus prior to cleansing it, and being caught in the storm triggers a stealth section. There’s no real trick to these, except to stop when you’re in the light. They aren’t fun, and by the third occurrence I was thoroughly done with them. It’s a bizarre inclusion. 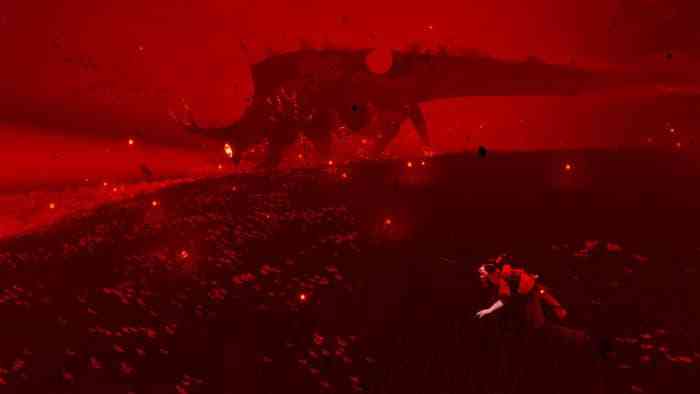 Once you’ve MacGuffin-ed enough, the Hunter can undertake a boss battle and cleanse one of the spirits overseeing the world. The battles are a fun change to the formula and another chance for the phenomenal soundtrack to shine, but they ultimately lead to the next plateau – where the process starts over again.

That each plateau is largely the same is ok. The core loop is fun, and the world continues to be gorgeous. Dashing and gliding around while solving little shooting and jumping puzzles is far from a chore. But given how awestruck I was for the first few hours, I was hoping I’d have my expectations shattered a few more times along the way.

The Pathless is a great game. It’s beyond stunning, with a remarkable soundtrack and phenomenal sense of place. Refined traversal mechanics do a lot of the heavy lifting, while puzzles and boss battles could use an extra dose of variety. Though the formula gets tired by the end of the tale, The Pathless proudly stands among giants of the genre like Journey.

*PS5 code provided by the publisher* 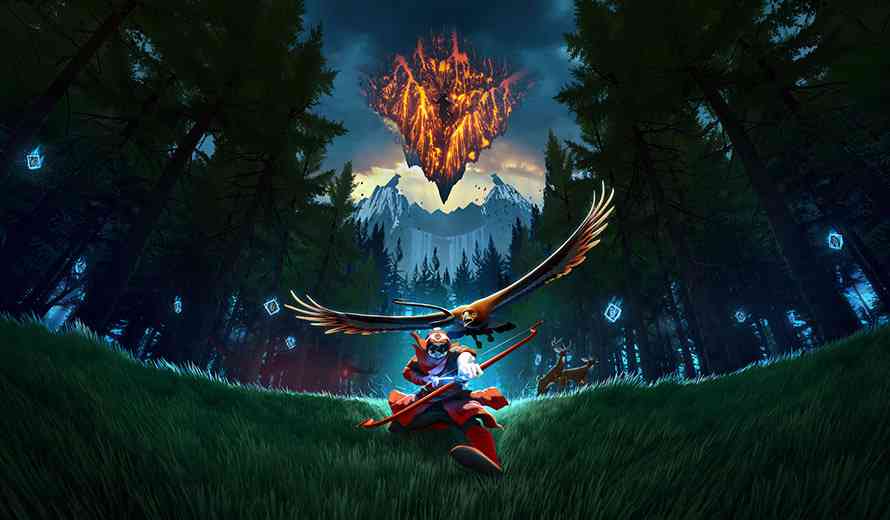