Kingdom Hearts: Melody of Memory is such a unique breath of fresh air in the video game world. It’s a cleverly sleeved rhythm game, which makes full use of the regular Kingdom Hearts series combat system. It’s an action RPG with real time combat, magic, items, and level gains set to over 100 musical pieces from the series. It’s a very addictive experience, and one that should be played by all Kingdom Hearts and rhythm game fans.

The story is about Kairi reflecting on the events of the entire Kingdom Hearts series to date. There is a little bit of new information about Kairi, but it’s minimal. Melody of Memories is all about celebrating the franchise for what you already love about it. That’s not a bad thing, although most Kingdom Hearts fans will be left wishing for information about the series’ future.

The way the unique gameplay works is that X, L1, and R1 are attack buttons. If there’s one enemy, any of the three buttons can be pressed to attack it, and if there are two enemies, any two buttons can be pressed, and for three enemies, all three buttons need to be pressed. Sometimes the beats that need to be hit are boxes or barrels instead of enemies. Some enemies require more than one hit, and are bounced back. This is notable because they’ll disappear if missed before reaching their maximum number of hits, costing the player precious points. All these attack targets are cleverly veiled beats that need to be struck a la Amplitude or Guitar Hero. Arrows pointing up indicate that a jump needs to be made with the circle button, which can also be held for a glide to hit chains of elevated beats. Triangle needs to be pressed if a magic crystal appears, which then attacks specific enemies. Combinations of these button presses make up the game, such as a jump followed by an attack to a flying enemy. Sora has HP and every time he misses, he loses a little. If he runs out, then the song is failed. 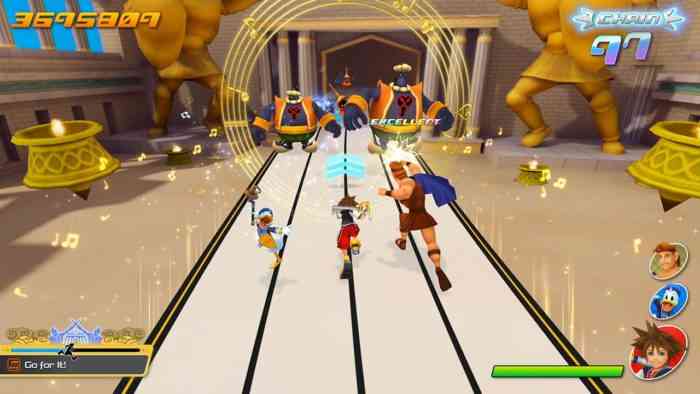 Every completed level in story mode unlocks that level in the Track Selection, where any song can be replayed for enjoyment/scoring purposes. Completion of a level also provides level increases, which betters HP, as well as items, which can be used in battle or in synthesis for other items. The most important part of the item synthesis process is there are some songs which can be unlocked in Track Selection, only through item synthesis.

All Your Favorite Songs

To further the game’s depth, each level features a score ranking, maximum chain, and overall letter ranking. Every song has easy, normal, and hard (or proud) difficulty settings. Levels all have sub-missions, like gaining points above a certain score, getting a high percentage of good or better hit connections, not using items, etc. Each of these sub-missions gives a star when completed, which are needed to unlock more levels. Just beating the levels won’t get the player through the entire story; they must also gain stars from sub-missions.

Something I feared from the game’s advertising is that the different theme songs for the Kingdom Hearts games (“Simple And Clean”, “Passion”, “Face Your Fears”, etc.) wouldn’t have levels. I’m happy to write that these are unlockable special levels that can be played in Track Selection. There’s also a second version of these theme songs called a Memory Dive, where a very impressive video covering the game’s events plays in the background and Sora has to fly through the whole song as more of an endurance test. I was very happy with the inclusion of these levels. 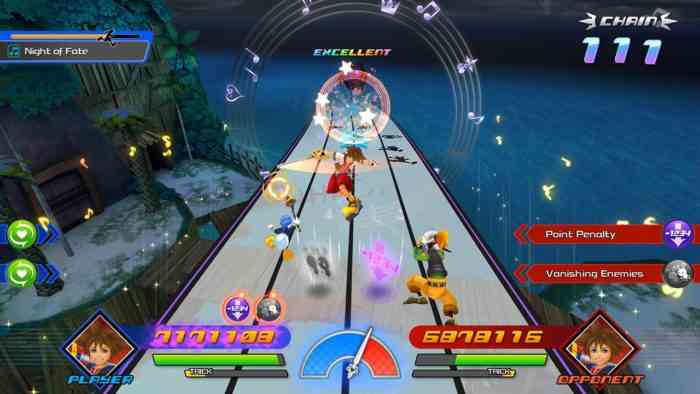 Team members can be unlocked, and there is a Team Menu for member selection, item equipping, and synthesis. The main menu features a museum where collector cards can be viewed, as well as videos from story mode and special videos/ Memory Dive songs. A jukebox plays all the songs the player unlocks. Game stats can be viewed. There are also remixed versions of songs that players can play as local co-op levels, and regular versions that can be played as local or online Vs. Battles.

The graphics are the same as the ports of the Kingdom Hearts games on PS4, and the overall presentation oozes quality. There are little stylistic touches found everywhere, like the level map looking just like a world map out of the original Kingdom Hearts, with the player flying a gummi ship, and selecting the different Disney and Final Fantasy-themed planets. Loading screens feature Sora, Donald, Goofy, and other team members stylized after the Final Fantasy Theatrhythm series. It’s a very nice touch of connective tissue to Square Enix’s other rhythm games.

Music in the game is heavily based on Yoko Shimomura’s game scores. If you’re looking for Disney songs, the only few present are the ones featured in the Kingdom Hearts games. I don’t want to spoil which ones are there, but the few Disney songs you’ll get to play are all bangers. There are also levels based on piano interpretations, and orchestral renditions of select tunes.

If I had any complaints about Kingdom Hearts: Melody of Memories, it would be that sometimes the different enemies and flashes on screen can impair the player’s vision too much. On repeat runs, the player will pick up the rhythm of the song, and these distractions will rarely be an issue, but on first run throughs they can seem unfair. Luckily they’re rare. There were also a few sections of the game where the odd star challenge was ludicrously more difficult than anything set before the player anywhere close to that section. It’s a small gripe, but it can slow the momentum of progress heavily at times. 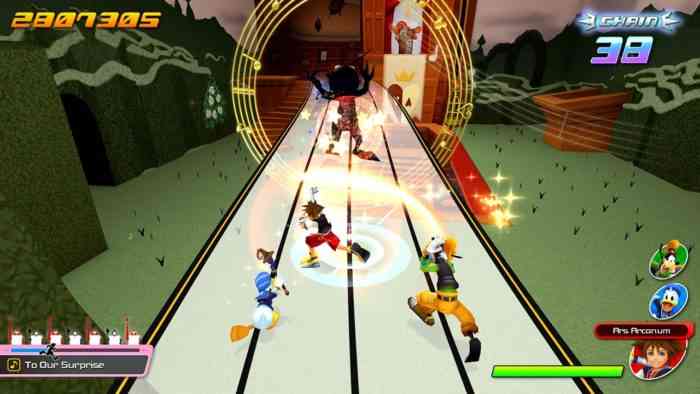 Overall, Kingdom Hearts: Melody of Memory is a phenomenal experience. It has truly unique gameplay wrapped in a Triple A Kingdom Hearts presentation. The music featured is among the most memorable scores in video game history, and the amount of content will keep players getting much more than their money’s worth. If you’re at all curious about Melody of Memories, rest assured that it’s a must buy.