Sakuna: Of Rice and Ruin Review

Sakuna: Of Rice and Ruin is developer Edelweiss’s newest game, a mix between an action side-scrolling platformer and a 3-D farming simulator. While those two genres may sound strange together, it’s an accurate way to describe the game, which simulates the life of a spoiled goddess who, along with a rag-tag group of unlucky humans, has been banished to the Isle of Demons.

She has a warrior god dad and a harvest goddess mom, so she’s equally suited to both growing crops and slaying demons. I would estimate you honestly spend about fifty percent of your time doing both—exploring the island with your magical scarf that functions as a climbing tool and carefully planting individual stalks in your personal rice field.

Sakuna grows more powerful with every rice harvest, which contributed to the gameplay loop that firmly established itself early on. As Sakuna, you scout out the land, clearing areas of demons to make the area safe for the humans you’re charged with keeping safe. This, along with clearing a set of objectives in each area, raises the overall exploration level, which usually eventually unlocks the next plot hook.

Sometimes I found myself unable to get to that point until I raised my strength, which meant I had to wait for the rice to finish. And you do farm that rice from stalk to finished product, planting, fertilizing, drying, husking, and grinding it each time you do a cycle of plants. There is no more satisfying sound in-game than Sakuna saying, “It looks pretty good this time!” (Not a direct quote, I listen to music while I’m playing).

The gameplay loop both drives the game and drives me crazy. Sometimes I wake up in the beautiful island sunrise and want to go demon-hunting, but I need to till the soil for the approaching harvest. Sometimes I want to finish up the harvest so I can take on a particularly difficult beast at night when the enemies are harder, but the rice is taking its time on the drying rack.

Especially later on, the days often feel too short. I’ll just be getting to the end of a level when the sun will go down and I’ll suddenly have no hope of winning. I also feel more and more limited in which special objectives I can target to raise my exploration level, as there are a few goals that remain unclear to me. It’s a little frustrating and a little tedious, but I stayed up later than I planned to several nights in a row because, “If I just get one more harvest, I’ll be able to go after that giant deer at night, and that’ll let me…” and so on. 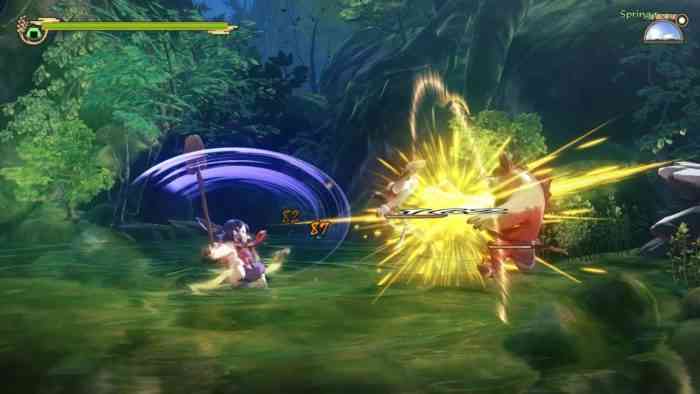 I did look through my menus to see if I could figure out what I was missing, but there is a lot to Sakuna. There are different buildings you go to in your home base for everything, and different humans to see about your weapons, armor, and rice fields, and a half dozen different menus. Most of it is easy enough to learn, but when I started the game, I knew I was committing to an investment of my time—and I still didn’t figure everything out. There is so much game to play, and I didn’t want to waste my time on menus or reading about new combos I could do.

The story is fun, but it isn’t unique. Sure, I haven’t heard the premise of a goddess getting kicked out of heaven to a stinky island with a bunch of humans, but the humans themselves don’t exactly make me think hard about anything. They don’t have to, of course, but man, I have seen every one of these characters before in Japanese games—the bumbling samurai, the clueless foreign woman, the thieving orphan, the lovesick girl, and the clueless child. Their arcs are well-trod ground. And the frequency with which these character arcs interrupt the gameplay! It seems as though the developers truly believe I’m eager to see the completely new concepts of: woman cooks, man works, boy makes tools, girl makes clothes.

The Road (Not) Taken

Not everything has to be subversive. But there does come a point where something folds so easily into the status quo that I roll my eyes. Sakuna wants to hear about her parents falling in love…but the boys want to hear about the battles! All the character arcs roughly follow the same path you expect them to if you’re familiar with Japanese period dramas.

I’m not completely heartless. There is a real sweetness to the evening dinner that completes each day (and gives the player bonuses based on the types of food you’re eating), and I do actually like the individual characters. Coming home to your mountain base is a joy every night (even when I’m mad that it is, in fact, already night). Sakuna’s arc is handled a little less obviously than many of the others, and I like seeing her character grow as she learns how to interact with others. 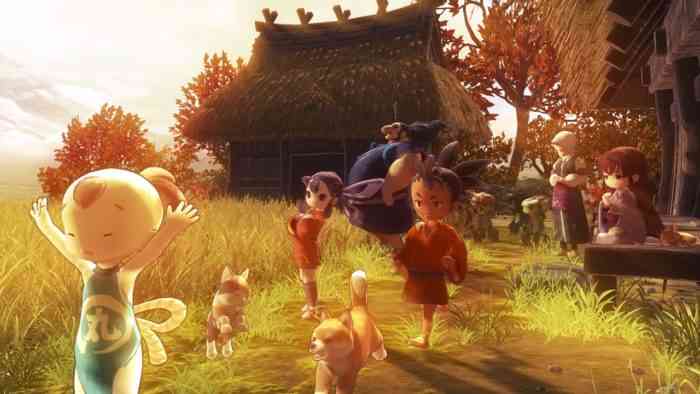 Coming home helps when it’s such a beautiful game, and not in the AAA “I can see every pore on your face” kind of way. There is a sense of style and understanding of what the game wants to portray, and every time you come home in the evening you can hear the crickets chirping and see the sunrise dipping over the horizon. If it’s the middle of the night, you can look up and see stars.

The art style is vivid and manages to not look realistic but still be immersive, and the simple act of being Sakuna and exploring the visuals around me is enough to want to keep playing. In some ways, the game reminds me of Animal Crossing games, where the loop slows me down and keeps me engaged in the little wonders of life around me.

Oh, to be a harvest goddess, stranded on the Isle of Demons, thinking about the stars…

…and how soon I can finish the next batch of rice so I can finally get rid of that deer.