The success of multiplayer dating sim Monster Prom has spurred a sequel that’s taking us into the summer of love. Monster Prom 2: Monster Camp puts you on a bus full of spooky and bizarre monster teens and sends you off to camp, where your goal is to get a date to the meteor shower. Fewer things are more romantic than stargazing, and you’ve only got a few weeks to make some magic happen.

This One Time at Monster Camp…

Monster Camp’s single-player mode gives you the option between a short, 30-minute game and a longer, 60-minute run. It’s mostly a narrative game with little to do other than read dialogue and click around, so most of your participation will include answering multiple choice questions. When you step onto the bus taking you away to summer camp, you’ll meet six different eligible monsters, all of whom have eccentric artwork and personalities. After you receive introductions to these characters, listen to a little contextual narration, and pack your backpack full of items like pocket therapists and competitive tarot decks, you’ll be asked your first question.

Your answer to this question pairs you with the romantic suitor who best matches your answer, and this match will be the star of your story moving forward. The first question I received asked me what my favorite animal was, and naturally, I said badgers, because they don’t give a fuck. I was immediately set up with Damien; the hot, bad-boy devil with a love for chaos and destruction.

Though there are six different eligible monsters, there’s little you can do to control which one you end up with. You’ll have options to sit next to the others around the campfire at night, but the conversations triggered are usually platonic, and they’ll rarely show up in your scenarios during the day. It’s a little unfortunate that the game pushes you in one direction with no way to deviate from it, but it’s effective in reeling you back in to play multiple rounds to experience new characters. 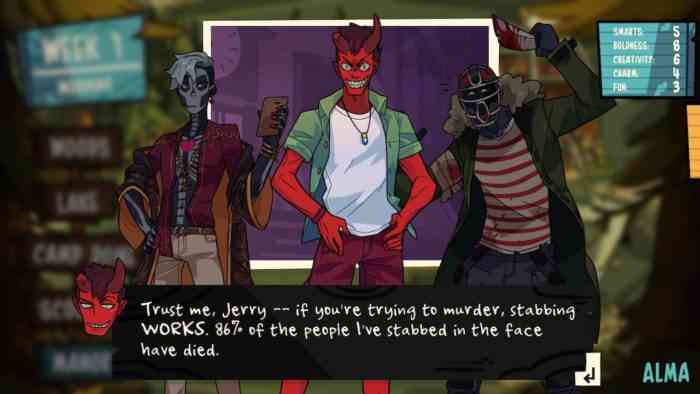 Chapters in Monster Camp are broken up into different “weeks,” which are really just mornings, afternoons, and nights that are spent around a campfire. During the day, you get to select from the five locations on the map, which include places like the lake, the woods, and the camp dome. Scenarios of varying involvement will trigger from there. Certain locations will prompt long-winded dialogue where you get to make choices, and others will simply award you with points just for existing that go to your stats.

Your stats consist of categories such as Smarts, Boldness, Creativity, Charm and Fun, and the way you respond to the different scenarios can either beef up your stats or decrease them significantly. Because your romantic interest is the center of nearly all these events, you will have to choose the answers they like the best, and in return they’ll give you stat points. I found that it was pretty hard to choose the wrong answer, but in general, you’re not even asked too many questions to begin with. The bulk of this game really is reading and sitting idly by, so don’t expect much thrilling gameplay. 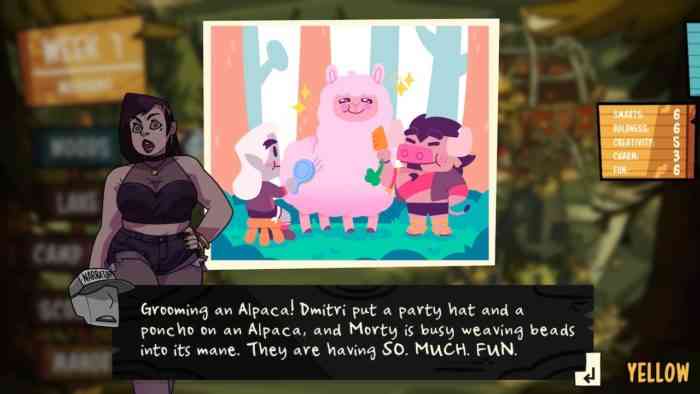 Your most active participation happens around the campfire. After choosing a seat and conversing with the other monsters nearby, you’ll play a drinking game. It takes a little while to figure out exactly how the minigame works because you aren’t given a comprehensive explanation up front, but it’s actually quite simple. A board with different drink cards will be shown, and you’ll have to select a drink without really knowing what it is. Other players will try to bump you off your square, and after the time limit is reached, whatever card you land on will be the drink you receive. Each drink has different stats, and the more you play, the more familiar you will become with which ones you want to go for. It’s a nice change in pace from the narrative nature of the rest of the game, but it could stand to demand a little more from the player to make it feel more engaging.

If you enjoy narrative games or dating sims, and want one that you can also play online, Monster Camp offers a plethora of different scenarios and stories that you’ll almost never experience twice. I do recommend playing it on a smaller screen rather than something like an ultrawide monitor, because the huge size of the text will have you scanning back and forth to a tiring degree, and the font is a bit hard to read. This sounds nitpicky, but for a game based on reading, a milder font and options to resize the text would be easier on the eyes, especially for those who sit close to big monitors.

There are nearly 350 different events to experience, not including the secret events you can uncover, and over 1,000 total outcomes to witness. You’ll likely find a great deal of replayability if this is a genre you enjoy, though I wouldn’t recommend it for those who typically like more active games. Simply put, Monster Camp puts you in control of very little, and sadly, doesn’t even require your full attention. As an experiment, I spaced out for one of my short runs; clicking through all of the dialogue as fast as possible and selecting answers based on the few facts I knew about the character. I also put my fate into the full control of the drinking game’s CPUs, and finished the run with flying colors. It doesn’t make a strong case for this game that it’s almost too easy to succeed, but crossing the finish line is also not what people should be looking for as a motivation to play. 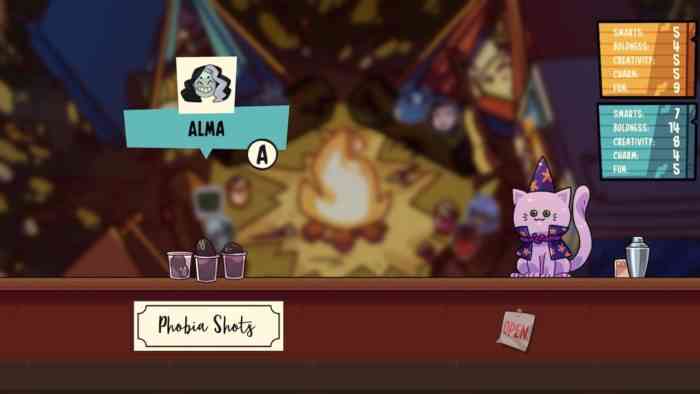 Monster Camp in a nutshell is about enjoying the story, admiring the whacky, graphic-novel style artwork, and building up your stats over the course of the summer to make sure you have enough points to win over your monster and secure a date to the meteor shower. The dialogue features a great deal of vulgarity, and it’s certainly not meant for the eyes of children. It’s outrageous and hilarious, and the scenarios are just as over-the-top as you would expect. It’s all about savoring the journey, and for most fans of this genre, there is a lot to appreciate.