Praey For The Gods Review

Praey For The Gods looks to combine elements of giants in the medium to create a new experience that pays homage to those that came before. Summoning the epic bosses battles from Shadow of the Colossus and the freedom that permeates The Legend of Zelda: Breath of the Wild, can this audacious debut from No Matter Studios seamlessly merge elements from icons of the industry?

Trapped in an endless winter, you must put an end to the wretched curse by finding and slaying the giant Gods that roam the desolate plains. With only remnants of humanity still visible, you will discover the mystery of the universe as you explore the various caverns and secrets that lie within.

Clone of the Colossus

The influences of Shadow of the Colossus are instantly recognizable with its impressive boss battles. Beasts wander the world, requiring you to formulate a plan to vanquish the creature. Each encounter is different with some including environmental puzzles in order to mount your foe. As you ascend the Gods, you must search for weak points whilst managing your stamina. Enemies will try to shake you off, so you will have to cling on for dear life otherwise you will have to make the climb again. Balancing these aspects adds to the intensity of fights, creating some incredible moments. Although encounters feel familiar, these have clearly been designed with love and admiration for the source material. 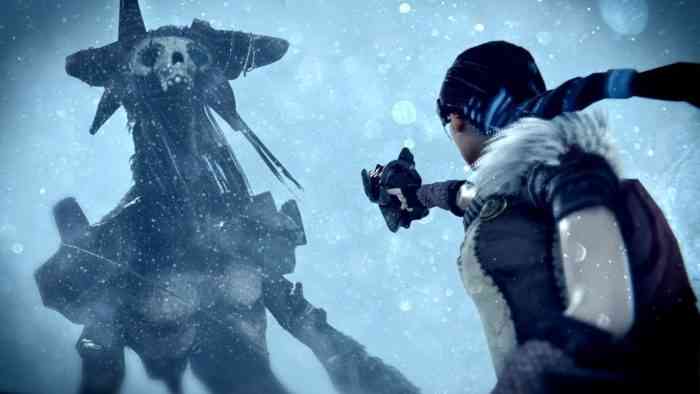 Maneuvering is quite awkward. The button layout is similar to SOTC and isn’t very intuitive. I would have liked to have seen No Matter Studios attempt to modernize the control scheme and bring it in line with contemporaries, however, they decided to lean heavily on its influence which has resulted in clunky, PS2 era movement.

Exploration of the vast, snowy expanse draws inspiration from Breath of the Wild. With your sailcloth, you can glide across the terrain in order to reach far-off structures. There’s an excellent sense of verticality with a range of cliffs and valleys that give you the options for traversal. Demolished statues lay buried within the snow, echoing that of a lost civilization. An air of uncertainty lingers as you investigate the barren environment, however, it’s here where a myriad of issues emerge.

Traipsing through the snow-covered areas is a chore. Our protagonist slows to crawl resulting in frustrating and ploddy movement. This is due to the design decision that places survival mechanics at the forefront. You will need to track your hunger and exhaustion levels which directly affect your stamina. In addition to this, body temperature plays a key role, requiring you to consider your clothing during your trek. These aspects hinder Praey for the Gods, taking away from the adventure focused experience that was key to its influences. Luckily, you can alter the significance of the survival aspects of the game, which does improve the experience. 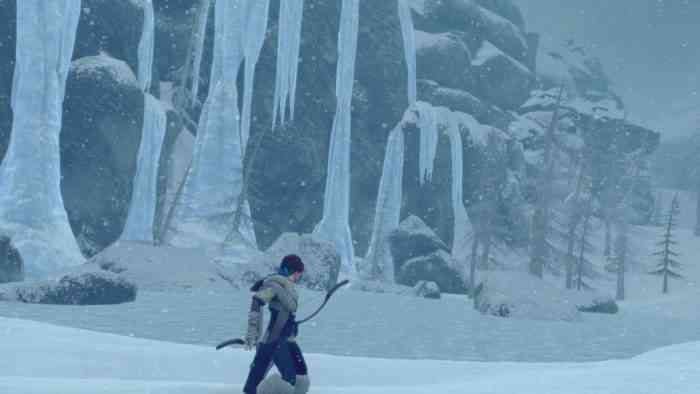 Dotted throughout the environment are enemies and mini-bosses. Here you will need to vanquish creatures with weapons that you collect on your travels. Combat is sluggish and rudimentary. This would be serviceable if it wasn’t for the inclusion of weapon degradation. Due to this, I found myself avoiding combat rather than tackling foes head-on. The crafting system allows you to create weapons and health items to support you on your journey. You can collect materials as you explore which can be used to create a variety of objects. Whilst its implementation is similar to that of Breath of the Wild, it feels like an unnecessary addition that adds irritation and takes away from where the game truly shines which is its SOTC-inspired battles.

The atmosphere is excellent in Praey for the Gods. Snowfall and the eternal night sky create a sadness that festers. The lack of life in the world heightens the importance of the task, giving the game an air of melancholy. While the areas are quite similar, they do feel like part of one land that has been ravaged by the weather. The Gods are all visually striking. Their imposing stature makes each encounter a thrill. This is amplified due to the grand, orchestral soundtrack that accompanies battles. Unfortunately, the aesthetics don’t veer far from the source material. I would have liked to have seen the developers stamp their own identity on the game rather than simply imitating others.

Praey for the Gods excels in some aspects but is hampered by a number of tedious mechanics. The boss battles are truly impressive in terms of design and execution and will please fans of SOTC. However, the dated controls make traversal and combat cumbersome. In an attempt to broaden the gameplay, No Matter Studios has added a survival system that is detrimental to the enjoyment. This, along with other needless mechanics, hampers the game. Rather than a tailored, focused adventure, the Praey for the Gods combines too many elements that make this a convoluted experience. 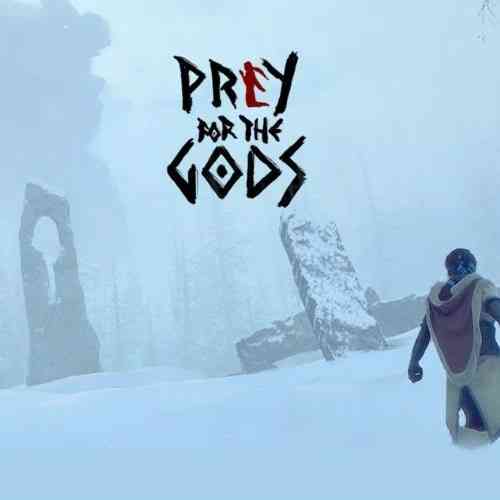 Deliver Us Mars Review – Drama and Mystery on the Red Planet
Next Five Nights At Freddy’s: Security Breach Review – A New Generation of Jump Scares
Previous One Hand Clapping Review – I Can Make Your Hands Clap