Tharsis is a single player turn-based survival game that involves some strategy, dice throws, and a lot of luck. As each step requires you to plan ahead a little bit, the only thing stopping you from succeeding is bad luck – everything that happens during your mission is up to chance, and your job is to be flexible and plan around it. Difficult to win even if you think you’re doing well, the intriguing and sophisticated concept of Tharsis is somewhat lost due to the frustrating outcomes and unbelievably unlucky dice rolls. Am I playing Tharsis, or is Tharsis playing me?

The game takes place on a spaceship travelling to answer a mysterious call from Mars, where a surprise meteoroid storm hits and kills two astronauts, leaving only four to survive. A body is preserved as meat for emergency sustenance, the ship is damaged with barely enough food to last the journey, and there are still six weeks left to go. Your mission is to help the remaining astronauts survive and reach their destination by fixing the affected modules in your ship and keeping them fed and healthy. Faced with ethical dilemmas such as feeding human meat to your crew or letting them starve, each week you will have to make tough decisions and hope it plays out the way you want to.

At the beginning of each week, the spaceship finds itself requiring repair in various modules. Some locations will cost more damage if left unattended, while others could affect the health and food supply of the crew members. There is a number value attached to each affected location, and it is our job to deploy the right people to bring this value down to zero. To do this, we roll dice. For example, if a module requires a total of 11 to be fixed and your active crew member rolls as five and six, then that module can be repaired immediately. However, if you fail to roll the right amount and there is no one else available to deploy, the event carries over into the next week. Your job is to repair as much as possible by utilizing the right people and praying that your dice rolls are adequate for the task at hand.

Choose Your Own Path

There are multiple factors to take into account when making decisions on what to do, which is what makes Tharsis appealing. Each module, each crew member, and each dice roll has its own special ability, and the complexity of it all makes the game very interesting. One module allows for food replenishment if you roll at least two of a kind, and another fixes the ship’s hull. Team members have their own abilities too – if you roll at least a 5, one can restore dice for team members in the same module and another can restore health. As the game moves on, it gets increasingly more difficult as you start running low on dice, which can only be replenished in certain modules, by certain people, or through eating food. There are also other factors that come up where dice rolls that land on certain numbers could injure your crew members. It is important to make sure each person’s number of dice, their health, and the ship’s health are taken care of, otherwise it is game over.

It is hard to explain Tharsis in its entirety without the player trying it out first, and unfortunately the short tutorial doesn’t take the opportunity to do this well. In fact, the tutorial only introduces you to the main idea – and this is usually fine to leave the learning up to experience – but Tharsis barely gives you time to understand what to do. At first, I kept making poor decisions and even replayed the tutorial three times to find out what I was missing. It didn’t help, so I decided to just power through the mission many times on my own. Finally, I started to pick up on how to properly play the game, but I know if the tutorial were one or two lessons longer, I would’ve gotten it a lot quicker. It did take a lot of time, patience, and failures, but eventually I got there. 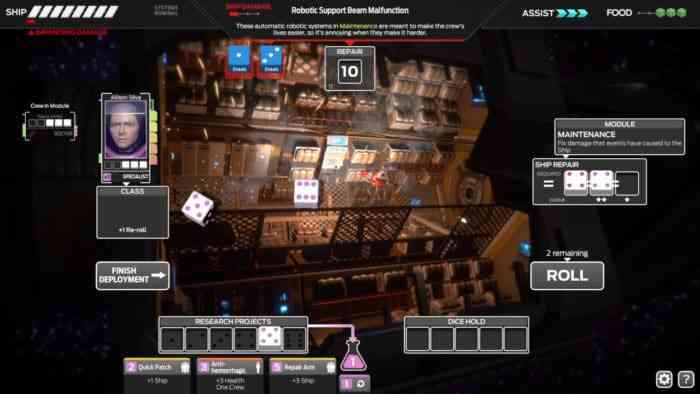 The game’s replayability is remarkable because every mission you take will have new events thrown into your direction; yet the situation is extraordinarily rarely in your favour. Even if your crew member has a large amount of health left, somehow in an incredible dice roll you always manage to land on all the magic numbers that injure and kill them. It’s like Tharsis is taunting you, as if it realizes you are actually doing well. I would like to believe that this is all just bad luck, but there have been way too many times where this happened and I’m almost positive something has been coded into the game to bring you to failure. To be honest, Tharsis really has the makings of an addictive game, but the rare taste of victory makes it very hard to experience its charm.

As unique and entertaining as this game is, I felt too much of it was left to sadism and luck. The difficulty level is high, not because the strategizing part was hard to do but because Tharsis seems to insult you when you’re doing too well. While I must commend the overall gameplay to be novel and actually enjoyable, the chances of you winning, even with good odds, is very slim. But on the missions where events don’t feel randomly generated to kill you, that’s when the appeal of Tharsis comes to life. It’s a great concept for a turn-based strategy game but be prepared for its unforgiving nature because you’re definitely going to die more than you survive.