As I installed Pangeon, it seemed like it was going to be fairly straightforward. I didn’t know how right I was. I went into the game knowing very little about it, but it was easy to make certain assumptions based on what it looked like. After getting over my initial disappointment, I tried the game again with fresh eyes. Once I had adjusted mentally, I found more success in the dungeon of Pangeon, but I don’t think my opinion changed very much.

When you load up Pangeon, you’ll probably be struck by a few things. First and foremost are the retro pixel graphics. These are fairly appealing if you’re into that sort of thing. It evokes Minecraft right? If you’re old enough, you’ll probably be reminded of the very early Elder Scrolls games. Pangeon has a similar pace, and a similar first person medieval combat style. And indeed, the game boasts that it is a “roguelike dungeon crawler inspired by the classics.” So you know that nostalgic style is very much intentional.

Now, it is important to talk about what Pangeon is not. It’s not a roguelike. I know, it declared itself one just a few sentences ago, but that’s only true if you stretch the definition of roguelike beyond credulity. To me at least, a roguelike is defined by random (or more accurately, procedural) elements. Every time you load up the game, the layout would be different, the monsters would be in different places or entirely different. You’d get random items and powers, and you would try out different combinations to maximize synergy. Oh, and you’d have some sort of important marker of progress you’d take with you when you inevitably died and had to start again. Hades is a roguelike. The Binding of Isaac and Enter the Gungeon are roguelike. Rogue Legacy is definitely roguelike. Pangeon is not.

My initial disappointment was palpable. The pixel graphics felt a lot less charming, and a lot more like that one old screensaver with the brick maze they used to have at my elementary school. Every time I died and restarted, I knew to avoid that early poison gas trap. I knew where the tough goblins were on the first level. I mastered the route that led to the barrels with the health items.

That’s when Pangeon started to click for me. Back in the day, we didn’t have procedural elements at all, and we liked it that way! I’m sure I’m not the only gamer who has the complete layout to World 1-1 from Super Mario Bros committed to memory. And there’s that one guy who always jumps out and scares me earlier in Dark Souls. I’ve committed their position to memory. So knowing where stuff is, how it’s going to happen, mastering the game through repetition, all of that can be cool. Procedural generation isn’t inherently a better way to play. 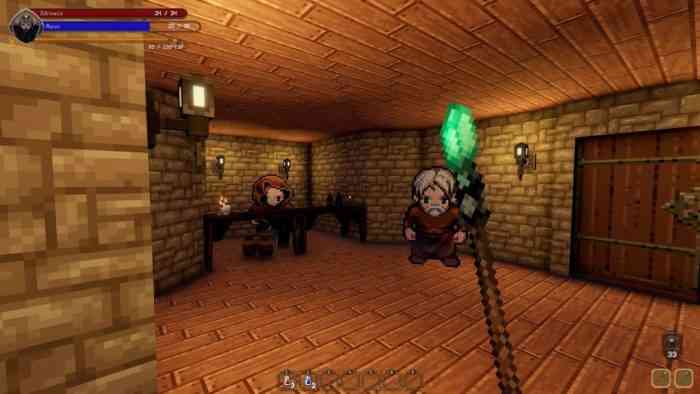 With all of that in mind, I really turned towards mastering Pangeon’s one dungeon and four characters. And…I still found it wanting. The design is not clever enough and the style is not engaging enough for me to want to repeat these levels again and again. The Steam store page describes Pangeon as “a mix of many roguelike games combined into a fun (although short) experience.” Part of that is accurate. But the fact is, there’s not enough story ambition or creative visual ideas to make this game vibe for me.

I made a little space shooter once, I coded it and drew in the graphics pixel by pixel using MS Paint. Everything about the game was derivative, and had been done better elsewhere. But I felt incredibly accomplished. I even wrote a little MIDI track to serve as background music. I bring this up because I could never in a million years make a game as good as Pangeon. I couldn’t create one level, let alone 8. But I’m not here to compare Pangeon to the best thing I could create. I’m not even here to compare Pangeon to other games that try for similar things. Ultimately, I’m here to compare Pangeon to the best version of itself, and figure out if it’s reached its full potential. And it hasn’t, not even as a diversion.