When you see that first glimpse of the long forgotten LucasArts gaming studio logo fly across the screen, a wave of nostalgia and excitement will undoubtedly wash over you as you recall some of the memorable experiences from the Star Wars universe 20 years ago. As the rest of Star Wars: Jedi Knight: Jedi Academy begins to load, however, you are undoubtedly met with far more wincing and questions than you probably care to admit. While this game was highly rated for its time, its manner of returning to the limelight and indeed its entire reason to do so quickly falls flat when compared to modern gaming convention.

Originally released back in 2003 on PC, the incredibly long titled Star Wars: Jedi Knight: Jedi Academy (shortened to Jedi Academy for the purposes of this review) was undoubtedly a fan favorite monument to the Star Wars universe. Players would take on the role of Jaden Korr, a promising young jedi apprentice on their way to Luke’s academy to learn the ways of the force. The narrative concept is neat, but given the way Star Wars has evolved since this games release it becomes very difficult to take anything about it seriously. While Jaden’s name is set in stone, their race, sex, and clothing are all selectable at the start of the campaign, as well as their lightsaber style and the color of their blade. These options are incredibly limited, but for its time this was a great new feature.

I’ve Got a Bad Feeling About This…

What follows is an experience best left to PC gaming. Controlling Jaden with anything other than a mouse and keyboard is sloppy and jerky. Lightsaber combat is sluggish and yet wild, proving to be most effective if you fight like A New Hope’s Darth Vader in that you stand around holding it in front of you until you see an opening and swing once for an insta-kill on most enemies. Force powers handle a little nicer, but swapping between them on the D-pad feels awkward and more often than not I found myself changing weapons when I wanted to select a power. It also really pokes at the back of my mind that there is no good reason that young jedi padawan being trained by Luke Skywalker should be heading into the field with such uncivilized weapons. Yes, we want to include the fan service of offering blasters and bowcasters, but you lose credibility of the source material. 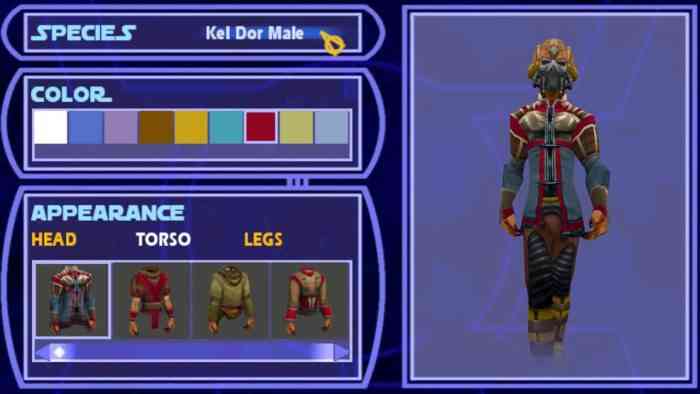 I digress. While the gameplay has been touched up to run cleaner on current model televisions, the menus and your ability to navigate them is plucked directly from the original PC game – complete with gritty details and awkward navigation galore. In fact, while in the mission select menu I could find no option to simply exit the game, instead having to go for a hard shut down in the Switch’s Home menu. Online combat hasn’t proven much better either, with PC gamers finding their way onto the Switch servers and easily decimating the console players with superior interface options. There are a few gameplay modes you might typically expect like deathmatch or capture the flag, but matches are always filled with a random lobby of players with no private server options so it really is just being thrown into a match at random with little motivation to, you know, play the game. 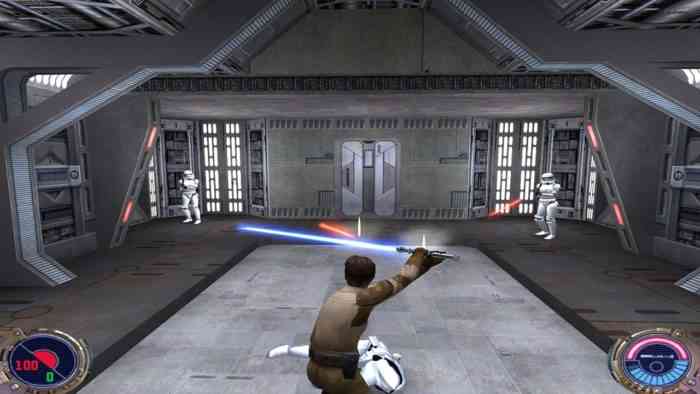 It was fun to jump back into the Star Wars universe, but bringing back a game 17 years old with a minor graphical update simply isn’t going to work, especially for a fan base of gamers so critical of the source material. Levels are fairly spacious with multiple ways to approach your objectives in many cases, but the lack of… well, anything to actually FILL said space doesn’t do the game any favors. The game is okay, but only just. If you were a hardcore fan of it back in the day, this might be a great walk down memory lane for you, but I really can’t think of a good reason they brought Jedi Academy back from the brink with even less than a fresh coat of paint. Had this been given the full remake treatment it could undoubtedly have been epic, but as it stands it was a bit of a clunky cash-grab game when it first launched and it still feels the same today. Maybe this entry should have stayed in a galaxy far, far away. 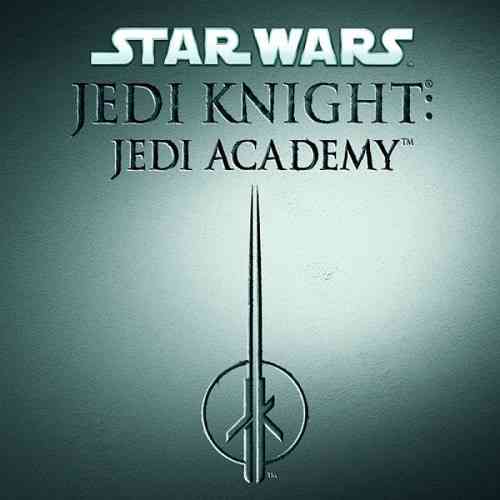