After spending a weekend playing Tearaway Unfolded I’m starting to understand how acid heads feel after one of those life altering trips you hear about. I have to keep checking myself from grabbing the nearest person by the collar, shaking them, and yelling into their face, “You don’t understand! Tearaway is amazing! You need to play this game!” So if you haven’t played Tearaway yet, excuse me while I scream into your face a bit.

YOU NEED TO PLAY THIS GAME!

And there is a possibility that you have played it already, considering it was released on the PS Vita two years ago. If you’re one of the few that has played Tearaway already, good for you. It reviewed incredibly well, but sold poorly. Turns out the universe isn’t always fair. Flash forward two years and Media Molecule has decided to remake the game for the PS4 in the hopes of introducing the game to a new audience. They’ve done their part, and they’ve done their part very well.

Tearaway is a game that, very literally, makes you a main character in the story. As “the You” you’re tasked with helping a little paper person named Atoi (pronounced: ah-twah) deliver the message she has tucked away in her letter shaped head. And if it weren’t for you Atoi wouldn’t make it very far in her papercraft world because at every turn some part of the environment is  crinkled, glued shut, origamied, scrunched, or folded in a way that creates an impasse. You must perform construction on this paper and flatten out the rough edges for her.

“It’s an interactive storybook that comes to life and it bursts with imagination at every crinkled seam. And if you open your heart to it, it’ll fill you with the goodliest of good vibes.”

There are a number of ways you’ll do this and they’re all fantastic. If a bridge is rolled up and impossible to cross, you can swipe your finger across the touchpad and a gust of wind will unravel that part of the world for you, allowing passage. Holding down a trigger will project a “guiding light” into the world that will light candles, hypnotize enemies, and scrub clean parts of the world that have been dirtied. There are a bunch of other ways you’ll interact with the game and I never got tired of them, mainly because it actually felt like I was interacting with this world and not just executing a video game mechanic. What separates these from lame gimmicks other games have used is the sheer amount of heart that Tearaway puts into it.

Tearaway is a game of creativity first and foremost; meaning it’s rarely challenging and the puzzles are often straightforward, but that isn’t the point of Tearaway. I hate to get all Zen koan on your ass, but I honestly think it’s the truth: the point of Tearaway is to see things that are only possible to see in Tearaway. It’s an interactive storybook that comes to life and it bursts with imagination at every crinkled seam. And if you open your heart to it, it’ll fill you with the goodliest of good vibes. 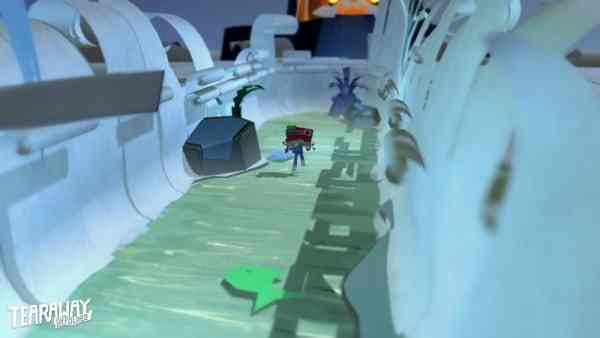 It’s biggest strength is the breadth of its spectacle. There are so many places you’ll see on your journey with Atoi and every environment is dense with gorgeous art that interacts with you as much as you interact with it. Trees sway in the wind you create, mushrooms mimic your analog sticks, and you draw things that then appear in the world. Everything is always moving in such a beautiful dance. I kept thinking that after the first couple hours the game was going to get lazy and start repeating assets because I felt that there was no way they could keep up that level of novelty. But no, they somehow managed to pull it off. No 10-minute stretch of this game is the same. Tearaway feels alive in a way that very few games do. Which is amazing considering how lifeless a piece of paper is.

“It joins the mediums of video game and art together, then flips them topsy turvy until you’re unsure of where one begins and the other ends. And it does this with enough heart to warm even the iciest of cynics.”

These are things people have been saying since 2013 though. The game looked great back then and looks even better now. Media Molecule has got the game running at 1080p and 60 frames per second this time around and they’ve managed to make the pretty, even prettier. New in this version of the game is an extended story and they’ve also created a companion app (for your smartphone or tablet) that will allow you to customize the world even further. I think it’s sort of meant for a second person who’s watching you play to kind of mess around with your game in funny ways. Hey, more ways to allow creativity is fine with me.

Of course, Tearaway isn’t without its faults. The combat is shallow and gets tedious near the end of the game, the story drags in parts and could have benefited from being an hour or two shorter, but Tearaway is such a rare type that those things are easily forgiven. It joins the mediums of video game and art together, then flips them topsy turvy until you’re unsure of where one begins and the other ends. And it does this with enough heart to warm even the iciest of cynics.

• Certain stretches drag on a bit 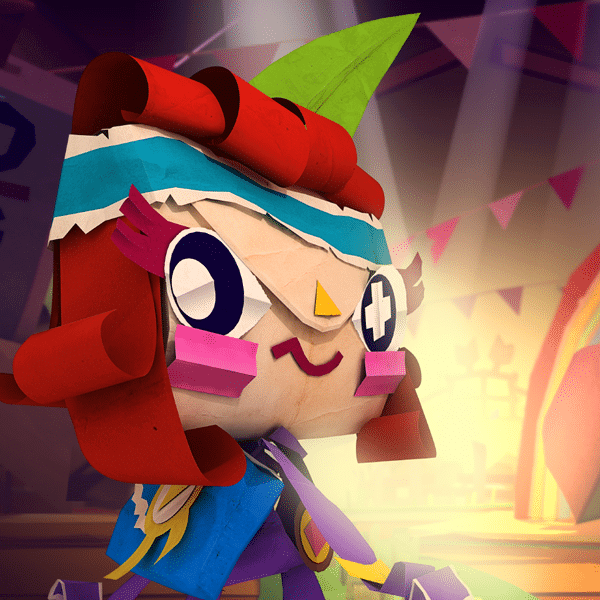 
Sackboy: A Big Adventure Is Coming to PC Next Month

Dreams Players Could Start a Career With Their Creations
Next NHL 16 Review – EA’s Hockey Franchise Shows It Can Still Light It Up
Previous Dropsy Review – Bizarre, Creepy, Huggable Clown Down on His Luck Strikes a Chord