Sublevel Zero Redux is a rogue-like first-person exploration-shooter in which you navigate a space ship through a procedurally generated labyrinth of colorfully exploding enemies, all while having complete freedom of movement in any direction. Think old-school gems such as Forsaken or Descent but a heck of a lot prettier.

There’s been some sort of space anomaly and as a lone gunship pilot, you’re tasked with collecting and crafting ancient technologies and destroying cores at the center of a dizzying maze of a space facility. The world seems to be falling apart and it’s up to you to save the day. The story is presented in simple text at the beginning of the game and the presentation here had my expectations of what was to come next set low. Maybe it’s for that reason that the opening moments of gameplay actually really impressed me. In fact, once I had control of my ship and started playing, I couldn’t put it down. I’m a sucker for games that evoke that “one more try” type of mentality and this one had me losing track of time more than once.

Sublevel Zero Redux offers 6-degrees of movement which means you can rotate and move on any axis in the zero-g environments. After a while, I would totally lose track of what was actually up or down until I came across a chest of loot which revealed I had been flying around the levels technically upside down for ages. It can be nearly vertigo-inducing at times but never to a point of being uncomfortable.

You only get one attempt at each run through the space facility, with the game being a rogue-like perma-death and no saves are expected, so mastering movement, as well as ammo conservation, is fundamental to success. Each and every shot matters with ammo not always being easy to come by, at least on the normal and higher difficulty settings. I found the balance here to be quite good and it’s this balance that allows the action to never get boring. You’ll encounter numerous types of enemies during your adventure including other flying vehicles, tanks, and turrets. These make up the bulk of your targets and each comes at you with their own deadly tactics and from every angle imaginable.

There’s a really nice ebb and flow to the game’s intensity. At times it’s unusually relaxing for a rogue-like thanks to the mellow but appropriate music and atmosphere in combination with the smooth and floaty controls. One moment I was exploring and slowly maneuvering around tight cave-like environments, searching for a needed key. The next, I was bombarded with a shower of laser and cannon fire within the walls of the facility itself. I was always engaged in my task of finding and blowing up the cores thanks to this dance between action and exploration. The fact that every run is different, made possible by the procedurally generated environments, only adds to the hold the game had on me.

If there are flaws to be pointed out, they’re in the crafting and looting system. While fully engaged in the exploration and action, the crafting itself left a little to be desired and it never got its hooks into me. Outside of a couple guns, I didn’t find much of interest here and the various ship hulls you can acquire didn’t make much impact on the gameplay. Once I found a load out I liked. I pretty much stuck with it. I also found the crafting menus to be incredibly confusing at first to not only look at but to navigate as well. 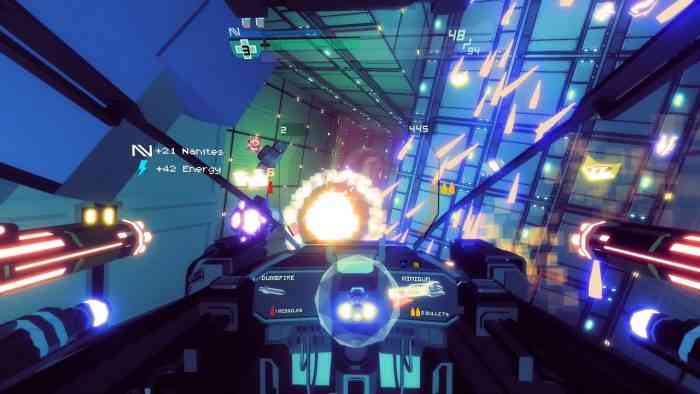 What I did really enjoy was the reward system at the end of each run and the tough choices to be made here as there was always some form of sacrifice. I could have a little automatic ammo regeneration added to certain weapons at the cost of less powerful shields. Or I could get bonus experience drops from enemies at the cost of boost and ram damage dealt by my ship as just two examples.

“If you have some nostalgia for classics like Forsaken or Descent you’re going find a lot to enjoy here in Sublevel Zero Redux.”

Another highlight for me was just how beautiful Sublevel Zero Redux is. Sure, it’s using low-poly models and environments with clean and simple designs but the lighting is fantastic and the use of color is absolutely wonderful. Weapon effects, explosions, and key items all have a neon glow to them which infuse the game with a cool retro-inspired feel. Enemies explode with a satisfying 3D pixel effect and when the action really heats up, the artful chaos on screen is never dull and often left me gazing at the screen, impressed by the light show. Sublevel Zero Redux also runs at a nearly locked 60 FPS. Only occasionally when the screen looked like something out of a Pink Floyd laser show did the performance see a few hiccups.

If you have some nostalgia for classics like Forsaken or Descent you’re going find a lot to enjoy here in Sublevel Zero Redux and if you’re new to this type of gameplay experience, well, this is a great place to jump in too. Pleasing on the eyes and ears and featuring smooth gameplay that deftly balances relaxing exploration and intense combat, Sublevel Zero Redux will keep you up late at night as you continuously say to yourself… “Just one more try”. 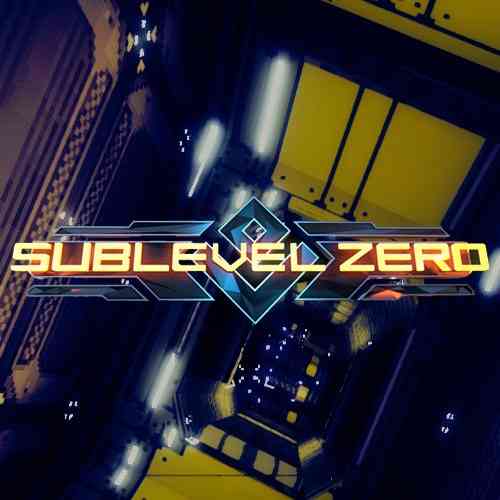 Warhammer 40K: Inquisitor – Martyr Announces a New DLC Class
Next Super Bomberman R Review – Not the Rebirth We Hoped For
Previous NieR: Automata Review – Jack of all Trades, Master of Some