NieR: Automata Review – Jack of all Trades, Master of Some

When NieR released in 2010, it was an odd mashup of RPG, action, and bullet hell. While it did a lot of things right, and the story was interesting enough to capture your attention, there seemed to be something missing. With PlatinumGames lending a hand, NieR: Automata seems to have really captured that missing element.

NieR: Automata has an interesting branching story, but I’ll cover the basics without spoiling much. You play as 2B, an android part of the YoRHa defense group helping out the resistance on Earth. The machines you’re fighting are starting to grow stronger in some interesting ways, and you’ll find yourself questioning the natural order of things. I hate being vague, but just know that this is all set years after NieR. Anyone who didn’t play the original, or who grasps very little of the odd story that is Darkengard and NieR, doesn’t have to worry. NieR: Automata does a great job of weaving its own tale, and newcomers shouldn’t be turned away because it’s technically a sequel. Besides, they’ve basically only improved on everything that the first game offered.

“The camera behaves sort of weird at times as well, but this is also highly customizable.”

The combat is divine. While not as complex as games like Nioh or Devil May Cry, it feels so well-polished that there’s nothing I would tweak or remove, only add. Dodging at the last second feels tense as time slows down, attacks connect with a good amount of force, and you can customize to suit your play style. Better yet, the fast pace suits the bullet hell aspects of Automata. Dodge and weave constantly, popping off air combos to stay out of the fray and alive. The only thing holding you back is the camera and your own reaction time.

My only real problems were both the camera and the control scheme. You really get thrown to the wolves with the prologue, getting used to all the camera changes and mechanics switching from bullet hell to melee combat, and the initial scheme just felt wrong. I had to switch a ton of buttons around to make things more comfortable because you’re going to be doing a lot at once. Anyone not on Easy mode is going to have to fire their pod manually, so get used to using every part of that controller if you want to put in extra damage during fights.

The camera behaves sort of weird at times as well, but this is also highly customizable. Horizontal/vertical speed, auto-adjustment with or without lock-on, hero following speed/response… Despite initial trouble with it, once you figure out your settings, it’s a dream. Once you get used to everything, this world really does become your playground. It’s all very frantic, and twitch action fans should have a lot of fun despite the small issues. There are some minor frame rate hitches on PS4, but they’re slight enough that you’ll hardly notice them and they won’t detract much from the experience. 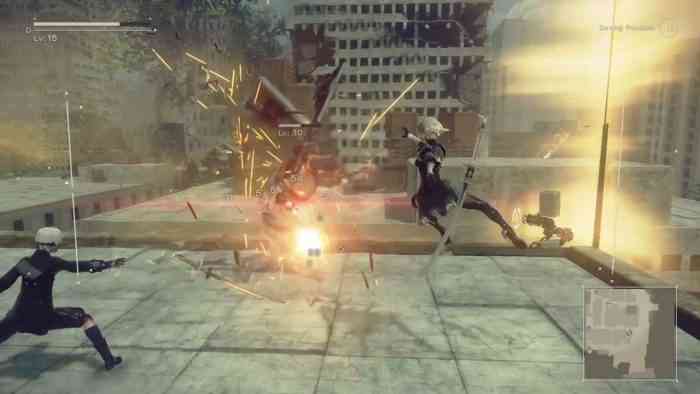 Once you delve past the prologue, you can finally start to customize 2B and how you want to fight. This is done via a chip system, and I highly suggest you spend your initial G (currency) on opening up more slots. Basically, each chip does something different and takes up a number of slots. Chips can be combined to upgrade them, but not all chips are born equal. Even though you might have two Critical Up chips, one might cost 7 to insert while the other might cost 6. So when upgrading, you want to choose the best of the best to keep your cost down, allowing more to be slotted in. It’s a clever way to feel strong and add diversity while letting the more hardcore players grind things out to create the most optimal build.

Earth is not what it once was, and the ruins are a ton of fun to move around in. There are a few tricks to get way more distance out of the typical double jump and glide mechanics, and you’re going to need to master them if you want to reach every quest or treasure. While the environments are a bit lackluster at first, the more you advance the plot and unlock new zones, the more interesting and vibrant it all gets. I delved into Automata coming from Horizon: Zero Dawn so it felt empty at first, but it fits. Let’s face it, Earth is basically ruled by machines at this point, humans are living on the moon. If you feel underwhelmed at first, I urge you to push forward. There’s a lot to discover, and you won’t be disappointed. 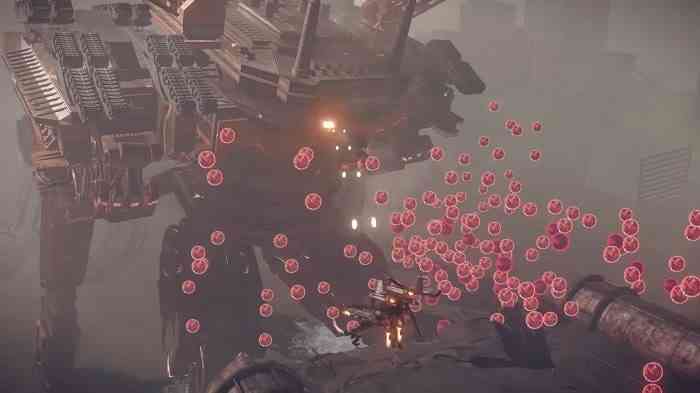 NieR’s soundtrack is highly lauded for the quality and how well it fits in with the world. NieR: Automata is no exception. I didn’t think they could beat the original, and it seems like they have. Whether it’s a crazy boss fight, some basic combat against mobs, or a contemplative scene where you’re simply taking in the world around you, the music fits perfectly. The soundtrack alone is a must-buy for me. The rest of the audio is crisp as well, with some great voice work for the key androids and NPCs. The developers went with quality over quantity, and you’ll quickly find that the majority of NPCs aren’t voiced – this is fine. When you do encounter someone who speaks, it just makes that interaction that much more special.

Even if you haven’t touched Darkengard or NieR in the past, I can’t recommend NieR: Automata enough. It’s such an interesting meld of open RPG, twitch action, platformer, bullet hell shooter that shouldn’t be ignored by anyone. In the slew of amazing games this spring release season, it’s easy to forget about this gem because it’s a sequel. Don’t let that happen to you. 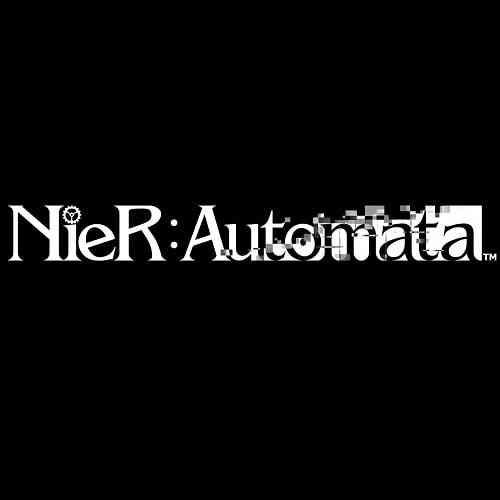