Splasher Review – Sticking It to the Man… Literally

If Splatoon and Old School Super Mario Teamed Up… Splasher

The beauty of Splasher is that it let me paint the walls red without a Mature rating. Fortunately, the game offers even more than that and surprised me with the level of creativity involved. I want to say it reminded me of Splatoon, but that’s only because of the clever use of ink and nothing else. And boy do I love the ink.

What I found interesting about Splasher is that it wasted no time tossing me into the action. I dived right in and got right to moving and jumping without a tutorial in sight. Right away, I appreciated that the game didn’t try to hold my hand. What it relies on is a learning curve that asks for your attention to detail. Where the story is concerned, I was greeted with a series of comics strips delivering context to the nameless character who we shall simply call the Splasher in Splasher — because that’s literally what he is. In one brief intro, the villain/boss gets a face and your mission is laid out; As a worker for a corporation known as Inkorp, you must rescue your fellow workers who are the victims of some wicked-shady experiments. Rescuing these individual workers supplies a major part of the experience.

“The ability to shoot water is a gift we take for granted until a game like this comes along.”

Every mission in Splasher asks the same thing: beat the level and rescue a maximum of seven workers along the way. I say a maximum of seven because, as you transition through each level and its obstacles, it’s relatively easy to skip their scattered sprites along the way. At first, they’re easy to find. With progression, finding all seven becomes incrementally difficult. Not only are they more hidden but the obstacles are deadlier and trickier. How do you get over deadly obstacles? through the game’s bread and butter – Splashing.

After the very first level, everything you do requires a hose. The ability to shoot water is a gift we take for granted until a game like this comes along. Quickly, red stickink is added to your splashing arsenal. Think of Prey’s Gloo Gun, only more versatile, red, and in 2D. The sludge is multi-purpose, letting you walk on walls, freeze enemies, and more. Upon the introduction of new ammo types, Splasher’s creative design really starts to shine. 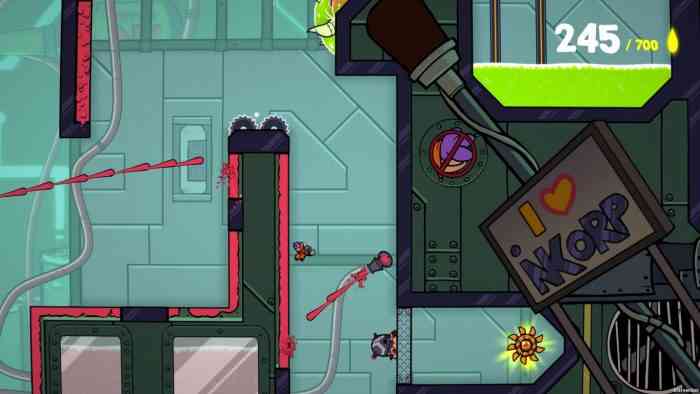 Level design is both rewarding and rage-inducing. Just when you think you’ve got the hang of the game, Splashteam throws you a curveball. Just when you think bloated acid and saws are the worst obstacles, devs introduce lasers. Fricken’ lasers! Every level you unlock is more difficult and more elaborate than the last. New mechanics, new enemies, and new booby traps get introduced to keep the experience fresh. Though the AI is reactive and dangerous, it is subordinate to the cunning design. They are cleverly and strategically placed to make optimal obstacles, despite their simplicity. Additionally, they are far more likely to kill you when you’re moving through levels at a brisk pace. Which leads me to my next note.

The most important thing to remember when taking on Splasher is that it’s not a race. It’s timed mode notwithstanding, you don’t have to complete objectives in any specified length of time. In truth, the game is more like a puzzle platformer. Unlimited lives and a checkpoint mechanic make it a true trial and error experience. Therefore, as I can tell personally attest, if you try to speed through the maps, you are likely to die… A LOT. As a matter of fact, the game seemingly requires you to die before you get the hang of each level. And to many, that aspect may be frustrating and rather repetitive.

“The sound design is easily one of the most redeeming qualities for an experience already enticing to the platform veteran.”

When it comes to Splasher on a console, the secret is precise controller handling. It is especially important for this game since you may be using water when you’re trying to use Stickink or using Stickink when you’re trying to use Bounceink. The difference is life and death. One moment you’re sticking to a wall above a saw; if you accidentally spray water on yourself, you’re dead. Ammo type matters and is a double-edged sword.

Furthermore, the game delivers those moments where you think you’ve gathered all the necessary points to ace the level. You may realize you’ve skipped a few by the time it’s too late, however. It is these moments that trigger a player’s OCD and turn a fun game into a chore. Thankfully, the feeling of getting all points on the first try is very satisfying. 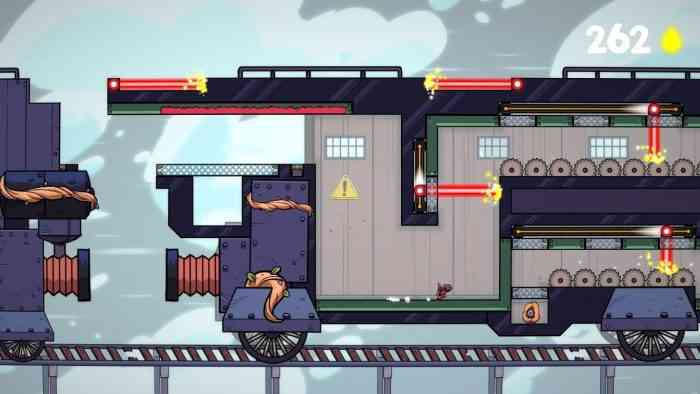 However, there is easily one soul-defining aspect to Splasher, one that helps make up for the frustrating platform mishaps, and that is the music. The sound design is easily one of the most redeeming qualities for an experience already enticing to the platform veteran. Each piece is as unique as the individual levels. And it does its job of coercing you into playing more, practically setting the mood for what’s to come. I don’t think I could have asked for better music to accompany my splashing and platforming shenanigans. I thoroughly enjoyed it as I navigated the intricate nooks and crannies of this title.

All in all, Splasher manages to take one of the oldest gaming genres and deliver something new. Nothing about its novel mechanics come off as bizarre or out of place; it weaves mechanics and level design in such a way that it positively innovates. Kudos to the folks over at Splashteam for making a platformer that doesn’t rehash the same old experience. 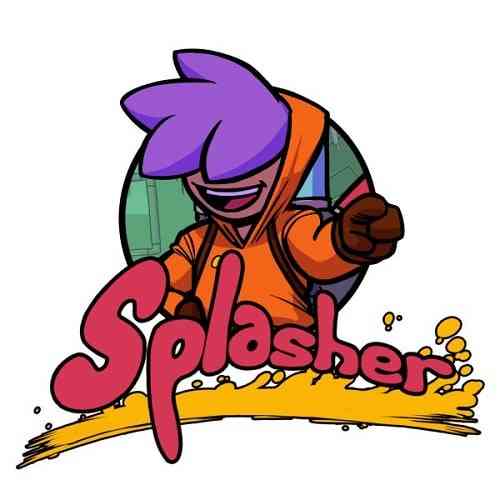