The Land of Pain Review

You decide to spend a weekend in your uncle’s cabin in the woods. It’s a long walk through the pretty foliage. There’s no one else in the woods. Things are peaceful. You get some water from the well, and some firewood. It looks like it’s going to be a quiet weekend. What could possibly go wrong?

Everything. Everything can go wrong. The Land of Pain is survival horror in the truest sense. Your thinly sketched protagonist is not a fighter. They’re not even the kind of person who can shakily aim a gun. You don’t even find a weapon. The entire game is based around exploration, puzzles, and atmosphere. It lives and dies on those three things.

Starting with the exploration, The Land of Pain is deliberately paced. Distances between set pieces are vast, and you often have to walk for a long time with nothing happening. Fortunately, the controls are tight, and the run speed is pretty good. The game toes just up to the line of making you walk too far, and then something crazy happens, usually involving trails of gore.

The first person perspective is well suited to the feeling of isolation. Unlike many first person games, you can see your feet. You move just a bit awkwardly, especially when you try to jump. Whether or not the strange momentum is intentional, it acts as a constant reminder that you are just some boring schlub lost alone in the terrifying woods. You’re not an athlete. You’re just some nobody.

“Whether or not a game is “scary” is too subjective to universally determine, but as far as it went for me, The Land of Pain gave me a serious case of the jibblies.”

The puzzles are the main area where The Land of Pain falters because there aren’t really any. Pretty much every challenge is presented similarly. The protagonist says something in a few lines of awkwardly written text, and you have to find the key, or the crowbar, or the ladder, or the object to proceed.

This isn’t an area where writing would be that important, but I often found myself questioning the direction of the story. An early puzzle has you exploring an underground bunker, looking for an oil can to lubricate a rusted valve. I was completely drawn in but was having trouble finding the can, and that gave me time to ask questions. Why did I need to turn this valve? The real answer was because that was how to access the next area to make the game keep going, but there are leaps of logic that don’t hold up under even flimsy scrutiny. 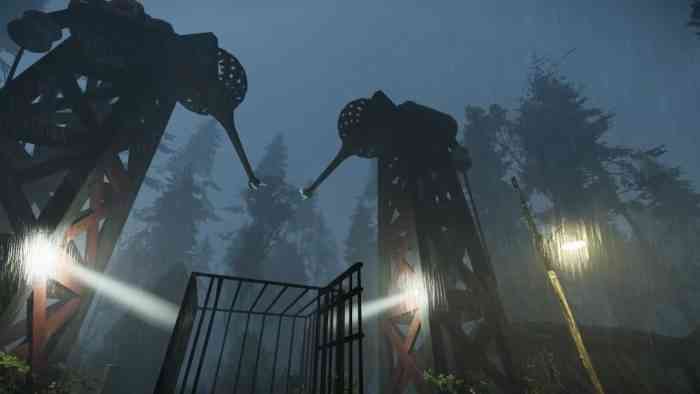 Fortunately, the atmosphere doesn’t often give you much room to ask such questions. The Land of Pain uses the Cryengine, so it is way pretty. It’s not going to compete with a modern Triple-A open world, but it comes pretty close. That’s mindblowing when you consider that it is all the work of one guy- Alessandro Guzzo. He had to place every tree, every cliff, everything!

Guzzo gets tension. Whether or not a game is “scary” is too subjective to universally determine, but as far as it went for me, The Land of Pain gave me a serious case of the jibblies. I would play at night in my dark home and feel thoroughly creeped out. I would continue in the afternoon, and it would feel much less scary, only for the clicking noise coming from my fridge to scare the hell out of me. I know there are people out there who pride themselves on not being scared by anything. That doesn’t sound fun at all. If you let it, this is a game with some good scares.

“The entire game is based around exploration, puzzles, and atmosphere. It lives and dies on those three things.”

That being said, it’s not exactly re-writing the book on horror. I wanted to avoid using the word “Lovecraftian” in my review, but once I discovered the tentacle-headed statues, it became hard to avoid. This is practically a straight adaptation of one of Lovecraft’s stories (or if you’re a horror snob, more of an August Derleth story). You’ve got cultists, sacrifices, strange artifacts, shrines, and ruins. The whole Cthulhu kit. But as October approaches, the spookiest of months, those kind of horror cliches are what I crave, more so than a pumpkin spice latte.

The Quarry Is a Scary and Creepy Good Time

Unpacking Review – A Moment Of Self-Reflection
Next Splasher Review – Sticking It to the Man… Literally
Previous The Solus Project VR Review – Survival in a Strange, Virtual World