As if there aren’t already more than enough VR shooters to choose from, Ubisoft enters the fray with its own entry, Space Junkies, a zero-g arena shooter with influences of Quake and Unreal Tournament. While its formula might seem immediately familiar, Space Junkies packs the high level of polish that can be expected from such a big-name studio, making it one of the most comfortable VR titles available. However, online games live and die on their player bases, and this multiplayer-only shooter suffers from a severe lack of content made worse by its premium price tag.

Space Junkies matches you with up to three other players in free-for-all, 1v1, and 2v2 game modes. While a 4-player count may sound limiting on paper, the maps are claustrophobic and designed with plenty of cover and hiding places to encourage ambushes and close-quarter engagements, ensuring constant and chaotic action. Taking a cue from classic 90s shooters, in Space Junkies weapons, health packs, and armor are sprinkled across the tightly-knit environments, making the levels themselves as crucial to the combat as a steady aim. All of this results in some interesting gameplay approaches. Some players may prefer to wait in a dark corner of the ceiling with a shotgun in hand, while others zip through the air on jet-packs with laser swords.

Happiness Is a Warm Gun

Speaking of laser swords, the weapons of Space Junkies are some of the best in VR. Everything has immensely satisfying weight and feedback. The shotgun, capable of eliminating opponents with one single well-aimed blast, packs one hell of a punch. The mini-gun sends you soaring backwards through space with its kickback, and can be wielded with both hands or just one (at the cost of greatly reduced accuracy). Weapons also take advantage of VR by providing some sort of tactile gimmick in their operation. The explosive slingshot, for example, needs to be pulled back as a real slingshot would. Likewise, the shotgun must be pumped after each round. These small details went a long way in selling immersion for me. 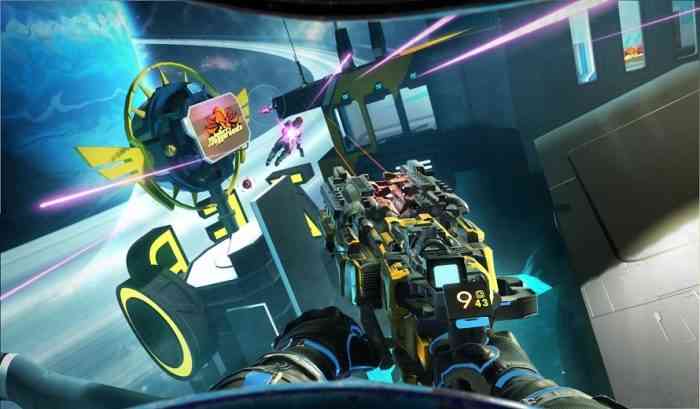 While Space Junkies is set entirely in zero-gravity, Ubisoft has taken careful measures in crafting the most natural and comfortable experience possible. You traverse simply by holding a face button and looking in the direction you want to move toward. For extra precision, you can also use the thumb-sticks – left stick for lateral movement, and right for horizontal. By the end of the tutorial, I already had a firm grasp on this simple locomotion scheme. Other small touches add to the intuitive nature of the controls, like the way weapons are tethered to your body so they don’t float away when dropped, and the placement of bonus gadgets on your shoulders, making them easy to equip at all times. With the gameplay being so fast-paced and confined to tight arenas, I often had to perform strafes, turns, and quick maneuvers, yet I never once felt nauseous over my dozen matches.

What deserves further praise is the multitude of set-ups supported. Want to play sitting down? You can do that. Shoot with the left hand? You can do that too. You can even choose to play in room-scale or using only front-facing sensors.

But having said all that, it’s worth noting that Space Junkies’ player population is noticeably low. I always had trouble finding a full game, even during peak hours. Sometimes, I had to wait for over five minutes before finding anyone at all. After my first match, I saw that I was ranked around 1,000 on the leaderboard. Two more matches later, I had risen halfway up to rank 500, which says a lot about the number of active players. The meager selection of game modes doesn’t help; they lack creativity and are entirely deathmatch-based, which grows stale after a handful of matches. As solid as the gun-play feels, there’s not enough depth in the gameplay to maintain interest. Outside of unlockable lootboxes, which reward cosmetic customizations, there’s little else to keep players coming back. However, the biggest hindrance to Space Junkies’ growth is its entry price — it’s currently selling for $53.00 CAD, a hefty sum for a multiplayer-only VR title, especially considering most VR shooters typically go for less than half that amount.

Space Junkies possesses a strong foundation. It’s frantic combat and responsive weapons no doubt appeal to those looking to spend quick bursts of game time in VR. Developed in-house by Ubisoft, it’s also one of the best VR experiences one can have in terms of comfort and ease. However, the admission fee alone for this arena shooter might turn away potential fans, and with an already low player population, it remains to be seen whether Space Junkies is here to stay.

Rhythm of the Universe: Ionia Review – Out of Tune

I Expect You to Die 2: The Spy and the Liar Review – Die Another Day