Evasion For PSVR is Unique and Full of Great Mechanics

Evasion, the new game produced and developed by Archiact, pulled out all the stops at PAX West 2018, living up to promises of a fun, immersive FPS VR experience. While I’ll be the first to admit that I’m new to VR (or maybe second to admit, considering I didn’t tell the developers until after I’d finished the demo), I thoroughly enjoyed the experience I had with Evasion and look forward to its release.

As far as the story goes, all I can really say is that there were some people trapped somewhere and I needed to save them—also, there were robots. While I’m not usually a fan of games that are more concerned with combat than story, Evasion is an exception, and once I had the VR headset on I cared a lot more about shooting robots and learning the best, coolest way to bring in the rewards (this is not to say I was any good at it, just that I had a good time). Besides, I thought the voice acting was funny and well-acted, which is something you can’t always say for even the most story-based games. 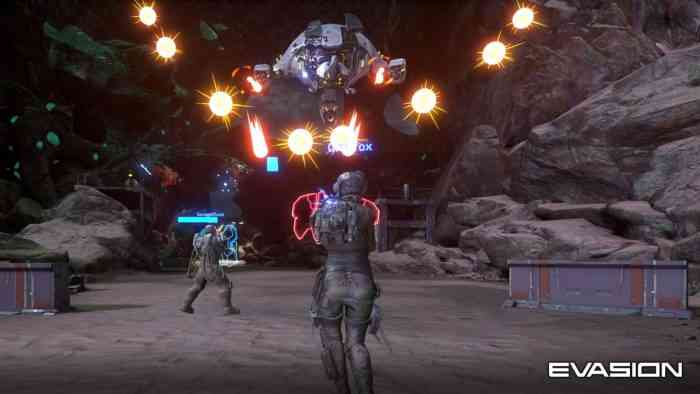 The class choices reflect the game’s basis as a co-op multiplayer, with distinctive classes like the healing Surgeon and the archetypical tank, but I enjoyed playing as the Striker, who served as the marksmen-type character. All the classes have the ability to help out their fellow teammates (unless, as the tutorial informed me, they’re being jerks, and in that case, let them die) and revive them, which makes making friends count. The controls were easy to pick up (with the exception of the camera angles, which I found a bit too jarring), and one of the best things about the demo was the way that the enemies didn’t just come towards me head-on—they took up a variety of positions around me, making it a real VR experience as I looked up into the sky to find my enemies. I may not be experienced in using VR, but I know there are a lot of people in the same boat, and I think Evasion is the perfect jumping off point if you’ve been waiting for the right game to start with.

Considering how much of a good time I had as the only player in a hotel room shooting away at robots with a headset over my face, the potential for multiplayer enjoyment is ten times that. Between the great mechanics, fun action, and unique gameplay, Evasion is one to watch out for when it releases October 9, 2018 for Playstation VR, Steam, and the Oculus store.