Silence, now on the Switch from Daedalic Entertainment, is set in a dreamlike world called Silence – the creation of the minds of the game’s two child protagonists, Renie and Noah. As cinematic visuals and music greet your senses right from the first sequence, there’s something instantly intriguing about this beautiful, narrative-driven point and click adventure that makes you want to pack your bag and explore it.

You play as the aforementioned main characters, young orphans in a war-torn fictional land. In the game’s opening scenes, they find themselves separated and lost in Silence after escaping from a bomb attack, and they must each traverse dangers and solve puzzles in order to meet up again and reach safety. Along the way they meet new friends – and some dangerous enemies — and of course play a part in the game’s overarching story.

Silence is a land of beauty but also danger, and the tonal balance of lighthearted moments with undertones of impending danger is a tenuous one but Silence’s developers are able to maintain it pretty well for the most part. On the one hand, there are cuddly, even cartoony, little creatures and sidekicks that Noah and Renie encounter on their journey. Most notable of these is the cute little Spot, a caterpillar who plays the part of your “pet,” but can also help you solve puzzles. On the other hand, various malevolent creatures hide around every corner, and death can come swiftly.

Through the Looking Glass

It’s in elements like these that Silence projects a nice fairy-tale vibe, or the feel of a children’s book come to life. The classic influences are also apparent in the lush Disney-esque high level of visual and musical polish, enhanced by touches like the sumptuous score by Tilo Alperman, which matches the emotional pitch of the narrative beautifully. I was even reminded of Alice in Wonderland, in the way that Noah and Renie escape to an alternate world full of anthropomorphic creatures and trippy visuals.

It turns out that the war going on in the “real” world is mirrored by a conflict in Silence itself, this time between the Rebels and the Seekers. Again, this reminded me of the classic Narnia tales, in which children fleeing World War II become embroiled in the struggle between Aslan and The White Witch. Silence’s writers deserve credit for a story that takes a lot of familiar elements of beloved fairy-tales and children’s literature and makes them into something new and unique. 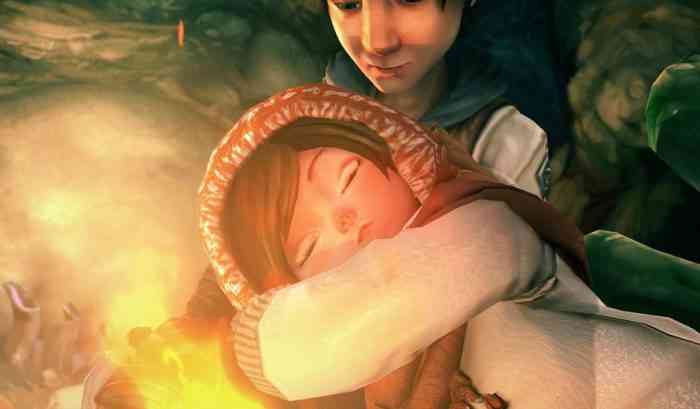 Maybe it’s in keeping with the children’s story spirit, but the gameplay is gentle, even easy by most game standards. Solving puzzles involves the fairly straightforward connecting of items together or the fetching of one item to trigger the next requirement or narrative cutscene. One might almost say the difficulty leans towards the children’s level, except for the odd jarring moment of instant death resulting from a wrong choice. For example, I once chose to confront a creature rather than hide from it, and learned that this choice was literally a dead end. But these instances are rare and your narrative progress will be steady with any effort.

For my tastes, the gameplay in Silence might have had more variety, but the addition of Spot as a helper really enhanced puzzle solving and helped to keep me thinking creatively. That’s because, in addition to being adorable, Spot can also do special things like inflate or deflate himself or interact with NPCs in a way that Noah or Renie cannot. Often you play along with Spot as a sidekick, making Silence a Co-op game in the spirit of another great Indie puzzler, Never Alone. Again, puzzles may have still felt simple but Spot added a much-needed dose of three-dimensional thinking at times.

Overall, if you’re looking for a more open world experience or a narrative that takes one of many paths based on your various choices, you might be a bit disappointed by Silence. It is a linear experience, a straight narrative path with puzzle-gates to go through to continue on — much like other point-and-click games like Deponia, Monkey Island or Broken Age. Having said that, the writing is very good and I enjoyed the narrative very much even if it did feel like a visual novel at times. Added to that are the gorgeous visuals, haunting musical score and solid puzzle elements and you have a fun and entertaining package that feels right at home on the Switch.

The Great Perhaps Review – The Man Who Fell to Earth

Deponia Doomsday Review – Challenging With a Side of Tedious
Next Space Junkies Review – Plenty of Polish, Thin on Depth
Previous Feather Review – Calming, Relaxing and Empty