Flight sims are often overlooked as a niche game. Not everyone enjoys barrel rolls and non-stop high-speed flight on every possible axis, but for some, it can be incredibly enjoyable to take to the skies where limits don’t exist. Developed and published by Samurai Punk, Feather is a game designed to be simple, serene, and relaxing – an experience we hope to achieve with most games we boot up after a long day. This is a game about soaring through the air and taking in the world around you, exploring each nook and cranny the land has to offer. It’s a uniquely simple take on the flight sim genre, but does this bird have enough meat to keep you full of whimsy and entertainment?

Set in the skies above a lone island, Feather begins with a very basic tutorial of the games controls: movement, camera, speed up, slow down, barrel roll, turn around. You’ll explore the calming and mellow island and delve into its gorgeous and luminous caverns to… well, keep flying. Feather has no health bar, no time limit, no enemies, no collectibles, and no objectives. It really is a game built about coasting through the air and exploring what the environment has to offer. Should you accidentally run into a wall or find yourself stuck in a corner, the game will reverse time enough to let you course correct and keep going. At this point in the game, I was beginning to feel a little leery about its potential but I was still curious about its calming properties.

The soundtrack for Feather is quite beautiful, with nine large rings hidden throughout the island which control the style of music you listen to. Flying through the ring will change the genre and tempo to something else. Discovering this, I now felt like I had an objective: find each of the rings. This took me about ten minutes before I had found them all. In my travels around the island I also noticed a variety of objects that stood out among their backdrop; fruit hanging from trees, braziers left unburning, etc. Being a gamer after all, I simple had to make contact with them to discover what secret they may hold. Sure enough, interacting with them would cause them to react and generate a tone which would chime in tune with the music playing, but that was it. 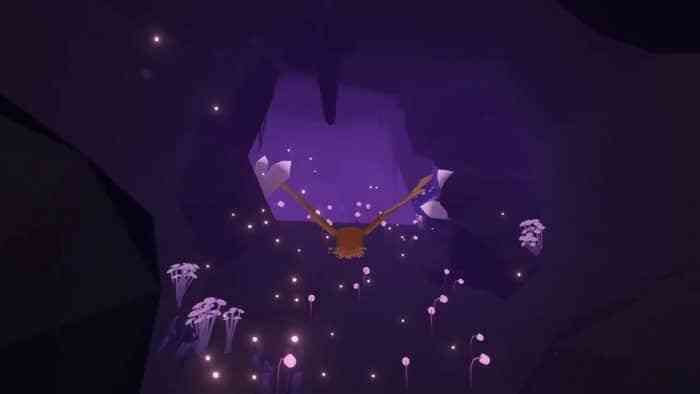 It took roughly 20 minutes of casual flying and exploration to realize I had circled the entire island, explored all of the caverns and their twisting, branching paths, and pretty much done everything the game has to offer. I understand this is a game built for the act of flight and relaxation but I couldn’t help but feel disappointed that I didn’t have more to do. I did find myself feeling incredibly relaxed while playing, turning into whichever corner I felt like at the last moment and letting go of conscious thought, but I ended up nearly dozing off a few times because I had no objective and with no health bar or stakes, there was no threat to my bird.

Feather does offer a friendly multiplayer mode in which multiple players can simply fly together in the same area. I feel like that would be much more engaging as you chase one another or play games of hide and seek, but it’s locked behind the Nintendo Online service which feels unnecessary to me. This isn’t a high intensity combat party game that will put a strain on servers, it’s a niche title that really shouldn’t require a subscription to enjoy. 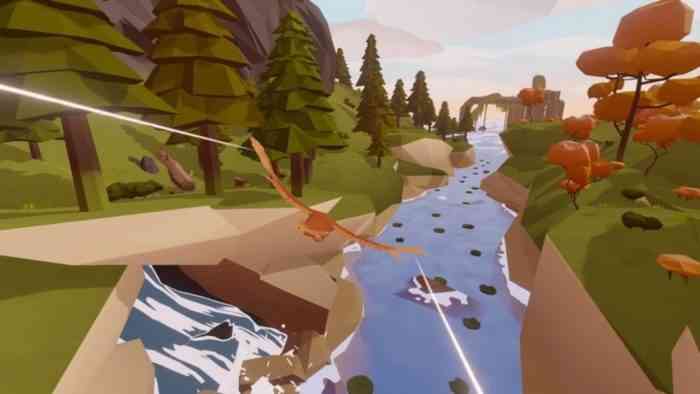 Seeing the trailer for Feather I had set my expectations fairly high. I have reviewed similar flight sim games in the past which offered a variety of puzzle solving and exploration mechanics that sucked me in for hours on end, regardless how weird and obscure the narrative was. I was prepared for something simpler, and I continually try to look at this as a game in which I am not the target audience, but it just feels too empty to be relaxing. In 30 minutes I already knew every path and where to explore. There is nothing driving me to jump back into the game because I feel like I “beat” it despite it not being a game you can beat.

Feather sets out to create the most relaxing and calming experience you can have in a game. With its varied yet mellow and uplifting soundtrack, its basic yet brightly colored visuals, and the great detail that goes into the rustling of the birds feathers, it can be quite a joy to soar through the air and practice trench runs through the cave tunnels. However, in designing a game to relax it’s also made with no stakes and no threats, so much of the serenity you experience after the initial elation of flight is from not feeling like there is an imminent threat at all. Despite its moderate size I explored everything Feather had to offer within about 20 minutes and if anything I felt more like taking a nap than being calm. On a technical level, the game is solid, but from a standpoint of having fun? This bird could have used a little more time to roost. 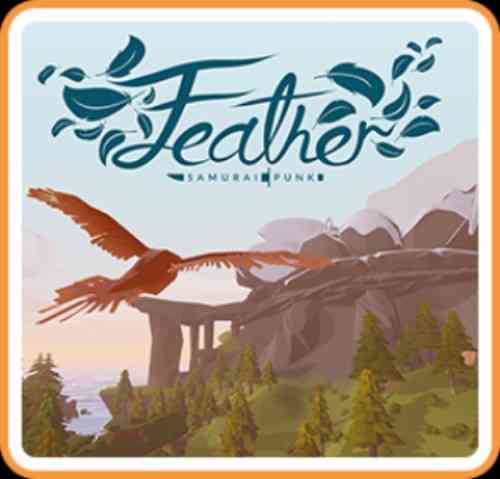