Never did I imagine Skylanders would become a household name when I visited the Toys for Bob studios in Novato, California back in 2011. At the time, Activision threw a truck load of money towards the game and the development team was certainly passionate about their project. Activision was all in. Clearly they were onto something as the gamble paid off eventually becoming the #1 kids console franchise worldwide. It’s gotten to the point where others have followed suit, or rather copied that successful Skylanders formula.

They say imitation is the finest form of flattery, and other publishers have done exactly that. Disney recently released Infinity 3.0 and Warner Bros. is set to release their new IP called LEGO Dimensions in just a few short weeks. While many attempt to take down the top dog of the “Toy-to-Life” gaming industry, I believe they have all inevitably fallen short. Once again ingenuity and creativity prevails as Skylanders SuperChargers delivers an unforgettable family gaming experience. 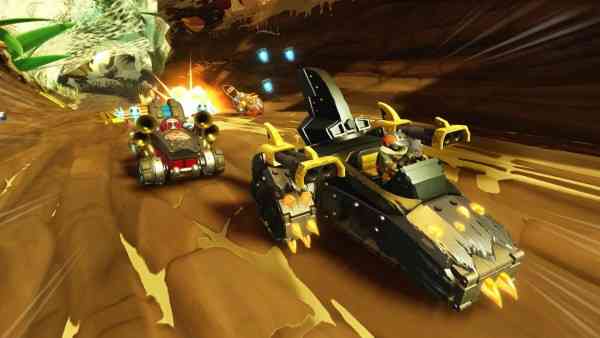 Not resting on their laurels, Vicarious Visions have introduced a few game changing features adding land, sea and air vehicles to the mix. It is without question a big leap for the franchise which changes the way you play Skylanders. It also adds some more slick looking toys to the collection. I get it; it’s completely justifiable to groan about the possibility of having to spend more cash on these new vehicles. As a parent who has already dropped a significant amount of cash on these figures, I’ll admit I went in with no desire to get sucked back into that Skylanders money pit. Yet after having spent the better part of the past week engaging in aerial dogfights, racing down roaring rapids and speeding down Skylands’ roads in the vibrant beautiful world that is Skylanders SuperChargers, there is no question in my mind this is money well spent.

Once you plug-in your re-designed, and larger, ‘Portal of Power’ and slap down your Skylanders character and vehicle on the portal surface, the experience largely looks and feels the same. Characters, visuals, music, theme and even the way the chapters navigate the world feels very similar to previous Skylanders games. Yet this isn’t a bad thing as the learning curve is minimal and that sense of familiarity should be embraced by fans. Trudging your way through the many levels smashing enemies and bashing virtually everything in sight remains highly enjoyable. The vast amount of collecting, solving puzzles and character interactions is equally impressive. Yet, when you roll up the traditional Skylanders experience and drop vehicles into the game in a Mario Kart-like fashion, the result is awesome.

“Yet after having spent the better part of the past week engaging in aerial dogfights, racing down roaring rapids and speeding down Skylands’ roads in the vibrant beautiful world that is Skylanders SuperChargers, there is no question in my mind this is money well spent.”

Despite some of the similarities, being able to pilot land, air, and watercraft throughout the SuperChargers universe makes for an entirely fresh Skylanders experience. It introduces flexibility, replayability and varied gameplay. In total there are 20 vehicles (and 20 new characters), each that have been given upgrade trees, weapons and other vehicle mods. So there is incentive to keep coming back to your favourites so that you can ‘pimp’ them out, improve the weaponry and the handling. There are submarines, speedboats, race cars, tanks, construction vehicles, jets and helicopters that are all wacky and brimming with personality. Not only are these vehicles playable in the game but many also have movable parts which make the toys fun and playable outside of the game.

Racing is obviously the most enjoyable aspect of using the vehicles, but the game also includes many other vehicle-based objectives such as rescues, puzzles, stunt tracks, and stealth missions. I would have been happy if the development team limited the vehicles to strictly the use of racing, but this isn’t the case at all. Vehicles are a critical component of gameplay and are needed to get past certain choke points in the game. Whether it’s using your water vehicle to clear out drainage pipes or your helicopter to fend off Kaos’ minions buzzing about in hot air balloons, Skylanders SuperChargers’ vehicles hit the mark.

Skylanders SuperChargers isn’t all about the vehicles either. The game is roughly 50% vehicle and 50% on foot. The classic on foot stages are mostly what we have become accustomed to as solving puzzles, bashing enemies and searching every corner for collectables is the name of the game. It’s fun swapping characters in and out of the portal but I have to admit there are moments in the game where it gets a tad tedious and repetitive. 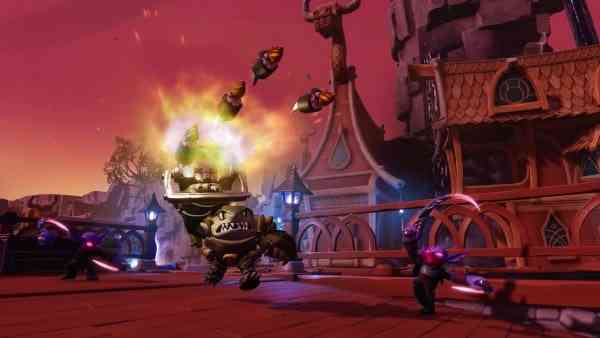 Easily one of the best-selling features of Skylanders SuperChargers is the fact you can use your existing Skylanders characters from previous games. With over 300+ characters as part of the Skylanders world this was an impressive feat by the development team. This news will also come as a welcome relief to those who have already shelled out big bucks towards the previous games and characters. Being able to play the game with your existing leveled up Skylanders figures is a feature that I absolutely love. The only downside is the new figures do not work on last year’s game, but feel free to use your existing collection on Skylanders SuperChargers without hesitation.

Before I get too far ahead of myself, I should tell you a little bit about the story. Without giving too much away, Kaos is back once again and has created his ultimate weapon yet, the Doom Station of Ultimate Doomstruction, or something like that. Kaos has managed to hold some Skylanders captive and it’s your job to rescue them with your special team of Skylanders known as the SuperChargers. Sure there is a little more to it than that but you get the idea. Regardless, the story is merely filler to an otherwise highly entertaining experience. Let’s face it; you are not buying the game for its riveting storyline. It is merely backdrop for the toys, vehicles and the gameplay.

As I mentioned, the gameplay feels very similar yet is much deeper and bigger this time around. Skylanders SuperChargers features 52-chapters. While the chapters themselves are somewhat short, make no bones about it, this is a game you could easily soak 30-hours into, possibly more if searching every nook and cranny is your thing. You can rush through the chapters, demolishing everything in sight while completely disregarding all the collectible aspects of the game, but you would sadly be missing out. Within each level you can collect treasures, charms, soul gems, legendary treasures, hidden mods, luck o’ tron wheels, keys, health, coins, Skystones, hats, etc. It is an impressive list of collectibles indeed and only serves to enhance the rich gameplay.

“It is the most fully realized and ambitious Skylanders to date and one that should be under a lot of Christmas trees this winter.”

In Skylanders SuperChargers you can play solo or alongside a friend in the comfort of your home. On the downside you and your friend cannot both control a vehicle. Instead one of you controls the vehicle while the other focuses on blasting the enemies. It is still entertaining but it would have been great if both of us could have controlled a vehicle each. Oh, did I mention you can also race online? Yep, you can take on a friend over the Internet for some Superchargers racing dominance.

So how does Skylanders SuperChargers feel to play? On foot, as I mentioned, it’s more of the same and nothing particularly innovative jumps out at me. Controls are simple and you can make it way past many areas by simply mashing away. Behind the wheel, there is a Mario Kart and Bee Movie game feel. Yes, I said Bee Movie game, as the racing segments are very similar. Weapons are used almost constantly with every land, sea or flying vehicle. It’s fast paced and has you whipping through areas in a flash. I absolutely loved the parts of the game where I was at the control of the vehicle and could have almost done away with the on foot segments all together. No question Vicarious Visions nailed the vehicle aspects of the game.

As far as the visuals are concerned, Skylanders SuperChargers delivers and is a step up from last year’s game. Everything seems much sharper and much more polished. The game is colourful and vibrant. The attacks look smoother and none of the animations seemed awkward or out of place. Even the game’s cutscenes have a high presentation value and simply look fantastic. The fast paced vehicle races also ran without a hitch. Even the online races were as smooth as silk. Needless to say, Skylanders SuperChargers is a great looking game and the development team have clearly upped the ante in the visuals department. 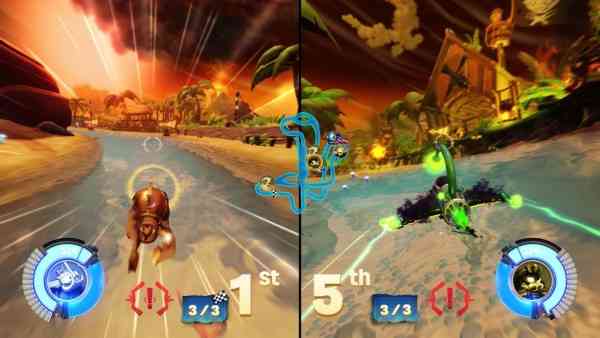 Much like the game’s visuals, I was equally impressed with the game’s overall sound package. Skylanders SuperChargers is a great sounding experience and much of the credit goes to the musical score which features whimsical acoustic sounds that should only be played in full surround sound. The music blends nicely from one sequence to the next instead of stopping and starting. The voice acting is also top notch as some notable voice actors lend their voices. Patrick Warburton is also back and once again is easily the most recognizable actor as well as the funniest. As for the game’s sound effects, all manage to effectively do the job and only enhance the gameplay experience.

Skylanders SuperChargers doesn’t just push the franchise forward, it takes a giant leap. The new characters, addition of vehicles, and the massive 52-chapter game makes for an unforgettable Skylanders experience. Skylanders remains the kings of the Toys-to-Life gaming genre and for good reason; they keep innovating and do not simply rest on the power of their brand. It is the most fully realized and ambitious Skylanders to date and one that should be under a lot of Christmas trees this winter. 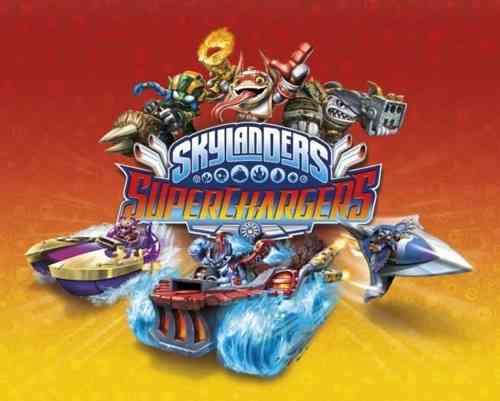 Disney Remains Happy With EA, No Interest in Self-Publishing Games