The world’s game. Soccer. Football. The beautiful game. Whatever the name, Soccer is the world’s most popular sport, watched and analyzed by literal billions worldwide. That obsession bleeds into the video game world, where FIFA 15 was among the best selling games of the year in many territories. FIFA 16 has taken feedback from last year to produce the best gameplay ever in the series. More realistic than ever, FIFA 16 simply feels like soccer.

In recent years, FIFA has been good. It’s gained a reputation for being a fun if not tactically realistic experience, and it’s one that gamers have latched onto with tenacity. There were of course vocal detractors on the web (angry people on the internet? Say it ain’t so!), and the FIFA team at EA Vancouver set out to change things up. During a recent studio visit, the team openly acknowledged that last year’s effort was enormously unbalanced. To that end, the defensive side of the game has been shaken up – defensively, this is a whole new ball game.

The most obvious change is in the middle of the field, where AI players more aggressively attempt to intercept risky passes. Stupid passes through the middle of the field – especially in the defensive third – are gobbled up easily by agile attackers, and force more tactical play styles. Utilizing your formation’s strengths has become more important, with angle passes to advance the ball or square passes to switch play often being the sensible option — like in the real sport.

The defensive AI has also been enhanced to play as a unit, with players dropping smartly into space rather than playing puppy dog with an attacker. Jockeying and player containment also feel more natural in this year’s game. These changes make tracking runs down the sideline less scary than previous iterations, as one can be reasonably sure that coverage will be decent in the centre of the field, and attackers feel less superhuman. Tackling itself is more satisfying as well, thanks to the option to fake a tackle and more diverse animations. Of course you’ll still feel like a dolt when Messi burns you because of a poor tackling attempt, but at least it’ll be because of your own inadequacy, rather than that of the game’s systems.

“You’ll still feel like a dolt when Messi burns you because of a poor tackling attempt, but at least it’ll be because of your own inadequacy, rather than that of the game’s systems.”

At times though, it feels like the defensive AI was tuned too far in the direction of space coverage. Headed clearances and other loose ball situations are taken rather lightly by defenders, preferring to hold shape than chase a favourable ball. Similarly, dangerous players are given a wide berth in the centre of the field – too wide for my tastes. Tactical changes can help alleviate this apparent defensive complacence, but this is the one defensive area that feels less than natural.

That natural feel owes heavily to the stunning array of animations in FIFA 16. Animations chain together very smoothly in most situations, avoiding the feeling that players are floating or snapping into preset animations during gameplay. Replays can feel slightly jerkier, but most often still manage to look surprisingly lifelike. Tackles, slides, collisions, shots, et al. are all absurdly diverse and a testament to the passion of the FIFA animation team. As impressive as this all looks in game, the places where the animations break down become all the more noticeable. Case in point: taking ultra long range chicken shots on net. Most keeper animations match closely what the pros would do, except when the ball is miles from goal. In such situations, the goalie tends to stand rooted like a bloody oak tree, waiting for the ball to cross the penalty spot before diving ridiculously for a save – rather than shuffling a few steps and easily claiming the ball.

Having said that, most great keepers are damn reliable in FIFA 16. Their positioning and decision making typically match their real life counterparts, with several distinct goalkeeping styles that are obviously different on the pitch. 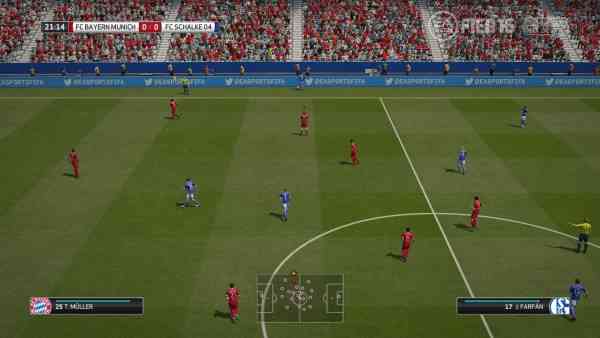 So, 650 words in, I’m about to mention carrying the ball. Yes, FIFA 16 really is that different defensively. It’s the best kind of different – more authentic, more interesting, and most importantly, more fun. Defending has become an engaging and noteworthy game phase, rather than the bit between attacking runs. And now, onto the glamorous part of the game: attacking.

Dribbling has been overpowered for years in FIFA. Players with no business doing so would pick through even the world’s most stalwart defenses unfettered. This year’s defensive changes have shifted the balance of power back towards the centre, but powerful dribblers have a game changing new skill at their disposal. No touch dribbling allows control of when players handle the ball, allowing for some really special plays for those who master it. For instance: Eden Hazard is bursting up the sideline, and some poor sap of a fullback is about to attempt a tackle. By holding L1/LB, Hazard stops touching the ball, instead allowing it to roll. He fakes a cut into the middle of the field (pressing a direction while holding L1/LB head fakes) and the fool goes for it, sliding harmlessly past, and leaving a clear lane towards the box for one of the best in the game (despite my hatred of Chelsea). In the same way, suddenly letting go of no touch allows for very precisely timed directional changes. 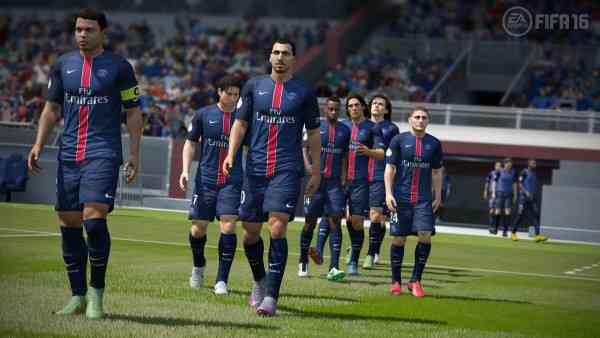 Those directional changes come in particularly handy when shooting. The ankle and foot of players has been redone, allowing for more precise calculations of spin and trajectory. Striking the ball on one side of center now creates much more predictable spin, and makes bending a shot around a defender an absolute treat – especially with the masters of the sport.

You might be able to tell – this is the best playing FIFA game ever, and it’s not even close. It feels like playing soccer, and that’s the highest possible compliment I can give a sports game.

Multiple modes and features have also been massaged in FIFA 16, meaning there’s more than ever to do in game. Career mode sees the addition of player training, giving flexibility over the growth of your player and squad. Growth is still slow, but being able to focus on certain aspects of the game is a big improvement for the mode. Pre-season tournaments have also been added in, providing a bit more incentive during traditionally boring or meaningless pre-season action. 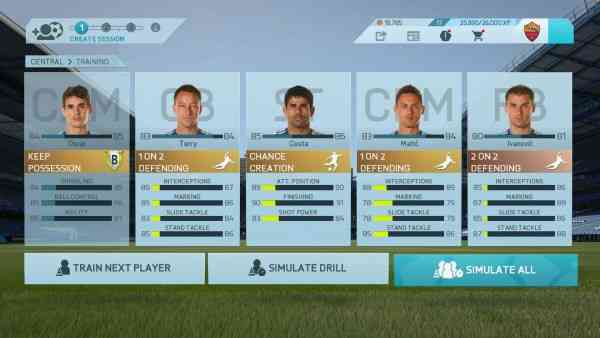 More interesting is the addition of draft mode in Ultimate Team. For an entry fee (FUT coins or FIFA points – which can be earned or bought with real cash), you get the chance to field a team of epic proportions… for a limited run. Draft mode offers 5 players for each position in your squad (including manager, formation, subs, and reserves), and measures the quality of your team through their skill and chemistry. This is a delicate balance to strike in practice, as players from the same country, league, or team are more likely to play well together. Do you choose skill? Or chemistry? It’s often an A vs. B choice, and rarely clear-cut. Building these squads is some of the most controversial and conversation inspiring fun to be had in FIFA 16, and gives players the chance to play with some of the top players in the whole game right off the bat.

What’s less clearly stated in game is that your draft team is temporary, and completely separate from your regular FUT team. After completing the squad, you’ll play up to 4 games. Win all 4, and you’ll receive a really nice FUT prize pack you can apply toward your standard FUT team. Win fewer and, well, you’ll get a lesser prize. Once those games are over, your team is GONE. Permanently. This was a bit of a shock, having gotten used to having Messi on one wing and Luis Figo on the other.

Generally, figuring out FUT mode was a chore. New players will probably find the myriad menus and options absolutely impenetrable, and even those who’ve played before (if not extensively) will likely be confused. Once you wrap your head around it the options make sense, but actual structure of where cards have been moved or what the hell you just did is fundamentally mysterious.

Finally, FIFA 16 introduces “the most important feature we’ve ever added.” Women’s soccer. It’s here, and it’s the real deal. The mode – limited to single matches or tournaments – is undeniably unique from the men’s game, and absolutely sensational to play. Put bluntly, women’s soccer is a totally different entity, and FIFA 16 nails that feeling. Player ratings were completely overhauled, as were models, animations, and game systems. The result is a damn near perfect representation of women’s soccer. My only complaint with the mode is its limitations mode wise – I’d love to be able to play a ladies career mode or create a female player. Developers are cagey about talking about the future, but player feedback is off-the-charts positive online, and I’d bet that future games will expand the mode towards feature parity. In any case the inclusion, which has been in the works for several years, is an absolute triumph for the sport and should put women’s soccer on the radar of all soccer fans. 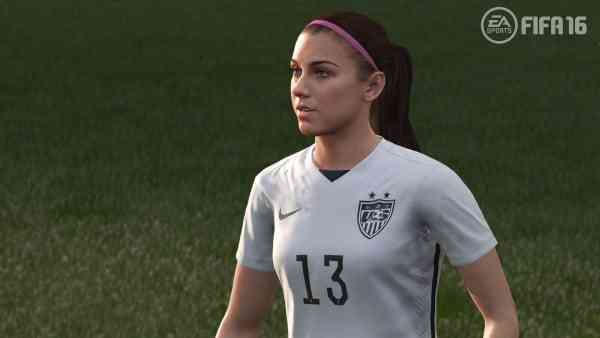 Not wanting to leave any aspects of FIFA untouched, there are enhancements to presentation as well. Commentary is better than ever, with English language legends Martin Tyler and Alan Smith doing a better job than ever of making relevant comments. Commentary frequently transcends single games, making reference to standings or player streaks – impressive.

FIFA 16 stands as a high water mark for soccer games, and sports games as a genre. Its nicely balanced gameplay and innovative feature implementations reaffirm the franchise as an industry standard, and soccer fans everywhere are going to love it. Arguing about FUT draft or playing head to head online, this year is a great time to get the FIFA franchise or rediscover a forgotten friend. Put simply, there’s never been a better time to pick up the beautiful game. 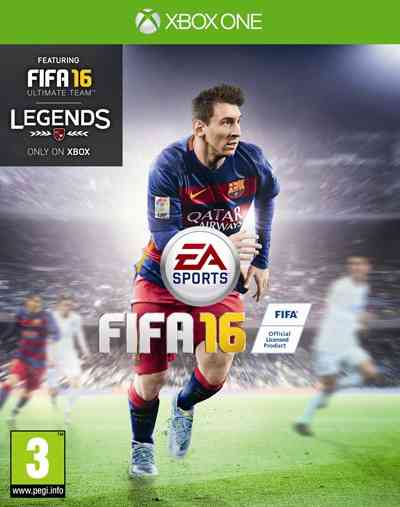