Rock of Ages 3: Make & Break Review – Balls to the Wall

I love the Rock of Ages franchise. They’re the perfect blend of simple, yet challenging gameplay coupled with a hilarious sense of humour. So, you can imagine my joy when I learned that the devs at ACE Team were releasing a third Rock of Ages game this summer. For those unfamiliar with the Rock of Ages games, the gameplay is extremely simple; roll a boulder down a hill and smash into the enemies castle. We’ll get into some of the intricacies shortly, but it’s basically a fun mix of Marble Madness, Super Monkey Ball and tower defense games. Rock of Ages 3: Make & Break aims to bring back all the fun from previous Rock of Ages games, while introducing some fresh new elements such as a sweet new create-a-level mode. Let’s get this review rolling!

In Rock of Ages 3: Make & Break, you’ll take on the role of Elpenor, a fictional character ripped from Greek mythology, who travels through time with the Rock of Ages battling an assortment of famous historical figures. It’s worth noting that the story is completely self-contained, and no prior knowledge of previous Rock of Ages’ games is required to understand what’s going on. Before each battle, you’ll be greeted with a Monty Python-esque cutscene establishing Elpenor and his Rock of Ages ball interfering with a different period of time. The India time period cutscene was particularly hilarious, with it’s wacky spin on a beloved Saturday morning cartoon. 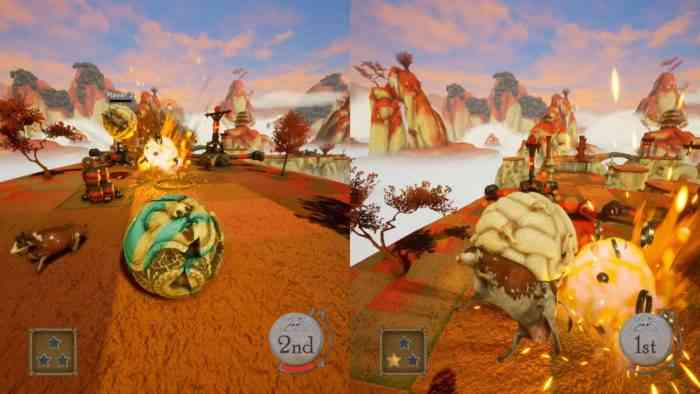 As mentioned, the main objective of Rock of Ages’ games is to roll a boulder down a lengthy obstacle course, before plowing it into your opponents castle door. Once your opponents door has taken enough damage, you’ll be able to crash through a squish your opponent. When you’re not rolling, you’ll need to wait for your team to assemble a new Rock of Ages boulder, at which point you’ll lay a variety of traps on your course that’ll try and prevent your opponent from rolling their boulder into your castle doors. This second phase is a bit like tower-defense games. Of course, this is only the primary mode, there are also a handful of other modes available, such as Skee-Boulder, which is a variation of the classic Skee-ball game you’d find in arcades. In Skee-Boulder, you’ll race against your opponents, hitting targets and building up a score. However, the first one to the bottom gets a shot at the Skee-Boulder board – which could provided a much-needed score multiplier.

In addition to all the new time periods and bosses you’ll face, there are a couple of new modes to keep things interesting. Time Trial will require you to race down the obstacle course before the timer runs out. Avalanche is a strictly tower-defense mode that pits you against a horde of enemy boulders gunning for your castle doors. You’ll need to make use of all your traps and obstacles to stop them. And then there is the Humpty Dumpty mode which requires some serious Rock of Ages skills to navigate a fragile egg from start to finish. However, the biggest addition to Rock of Ages 3: Make & Break is the new “make” mode which allows you to create your own levels for use in all the different Rock of Ages modes. Building your own levels is a breeze, and you’ll have the guidance of Napoleon Bonaparte to teach you how its done. Once you’ve completed a level, you can upload it for the entire world to ruthlessly judge.

Rock of Ages 3 features both local and online multiplayer modes. Online multiplayer allows up to four players to compete against each other in a variety of competitive modes. Local multiplayer allows two players to complete the entire story campaign together. As fun as it is to play local multiplayer, because you’re playing via split screen, your field-of-view is reduced substantially, which can be a bit of a hassle. Also, I often noticed some bizarre visual issues with the level backgrounds when playing split screen. It was more annoying than anything and will hopefully be patched sometime in the future. 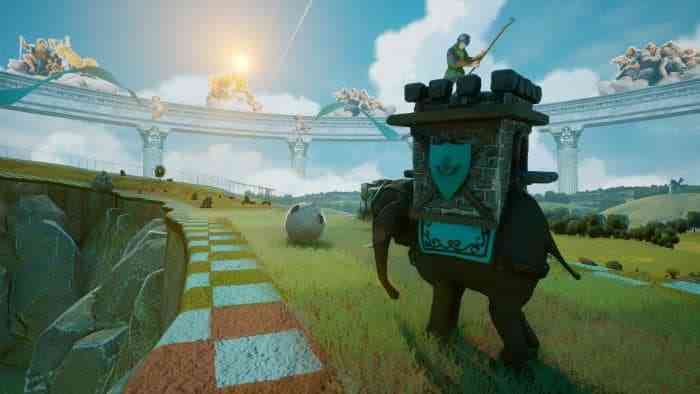 One of the issues I had with Rock of Ages 2: Bigger & Boulder was the occasionally awkward camera, and unfortunately, this doesn’t seem to have been addressed with Rock of Ages 3. There were more than a few times when I would fall off the course, because I couldn’t see the gap between the ledge I was on and the ledge I was heading towards. The right thumbstick does give you some control over the camera, allowing you to pan out and see upcoming obstacles better, but I would have preferred having the ability to permanently set the camera a bit further back to give me a consistently better view.

Rock of Ages 3: Make & Break is an absolute blast to play. It’s incredibly simple to learn, but still challenging enough to force me to approach certain levels strategically. I loved playing the local multiplayer with my kids, even if it was a bit more challenging with the reduced field-of-view. The single-player campaign alone will take most players a good six+ hours to complete, plus you add in the limitless content created by fellow gamers, and you’ll get plenty of enjoyment out of Rock of Ages 3. This has been one of the most fun games I’ve played this year and I highly recommend it to anyone looking for a relaxing time with a fun sense of humour. 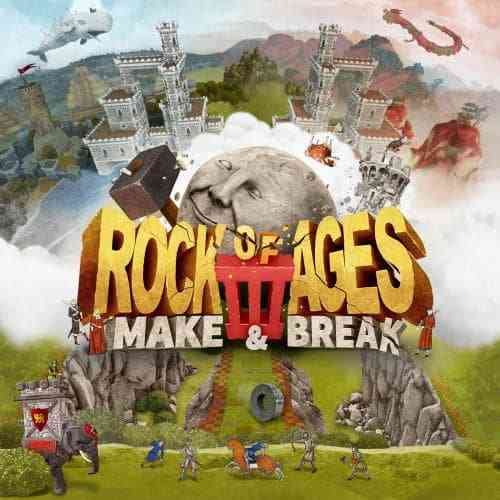 
‘Rock of Ages 3: Make and Break’ is Breaking (Genre) Barriers