‘Rock of Ages 3: Make and Break’ is Breaking (Genre) Barriers

“Rock of Ages” is a jack-of-all-trades type of game. This was true for the original title that was released in 2011, and it’s even more accurate for the third instalment, “Rock of Ages 3: Make and Break”, which is set to come smashing onto your screen in June of this year.

Because “Rock of Ages 3” does so much, it’s a bit hard to describe exactly what kind of experience it is. There’s tower defense, rock racing, and even a humpty dumpty mode, which if you haven’t played any of the titles before will probably have you shaking your head in confusion. To sum up how you spend most of your time in “Rock of Ages 3”: you control the giant titular boulder and have to smash your way through various obstacle courses toward an objective, or in the tower defense, take on the role of a creator and install traps and barricades to prevent other rocks from crashing into your base. It sounds pretty silly, and honestly, it really is. But “Rock of Ages 3” seems to understand this fully and has a kooky sense of humor to back it up.

Speaking of humor, “Rock of Ages 3” does in fact have a story mode, which showcases the game’s zany writing. If you’ve ever watched a Monty Python film (“Monty Python and the Holy Grail” especially comes to mind) you’ll immediately find some familiarity in its approach. The cut-and-paste cartoonish characters and eccentric voice acting is hugely reminiscent of those classic Monty Python animated cutaways found in the movies. Though clearly not the most original sense of humor, it fits surprisingly well into the game and ensures even the tutorials have a bit of levity to ease the pain of learning all the different modes and tools available. As far as the story itself goes, you get to follow some of history’s greatest figures spanning all the way back to ancient Greece. It’s not meant to be serious, and the segment I was able to play mostly served as an introduction to the different modes and gameplay features with light narrative as a framework to guide me through.

The campaign is only one aspect of “Rock of Ages 3”, though, and as the title suggests, the remainder of your time will be spent making stages and breaking others. There is a fairly detailed level editor in the game, and though I’m not the most skilled level designer, it seems like “Rock of Ages 3” provides enough tools and options to keep devoted designers pleased and will allow them to create some whacky stages. I preferred the modes that involved more breaking than making but having those features there for those who want them is great. 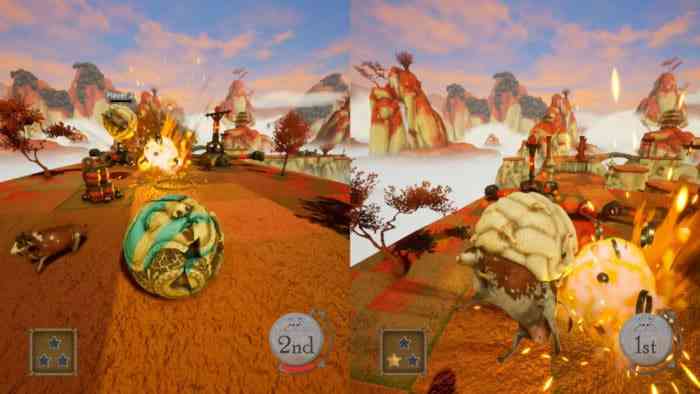 Once you’ve finished creating a stage, you can share it online for others to try or search for other user-created levels to try for yourself. The addition of online multiplayer across various modes adds significant replayability to the overall package, which should keep invested fans busy for as long as they desire.

From its hand-drawn characters to its realistic rock physics and plethora modes, “Rock of Ages 3: Make and Break” is a ridiculous mixture of things but brings them together in a way that makes sense. I wouldn’t have thought that crafting tracks for a giant boulder to race down combined a Monty-Python style sense of humor would be something I’d be doing in 2020, but at the end of the day, video games are made for doing exactly these types of outlandish and silly things you can never do in the real world, and that’s what makes them so incredible.

Rock of Ages 2: Bigger & Boulder Review – Balls of Stone
Next Old World is Shaking Up The Genre & Much Deeper Than I Imagined
Previous Gears Tactics is Gloriously Bringing The Pain Train to XCOM & Gears Fans