Carrion Review – An Indie Gem of a Horror Game

Carrion snuck out of nowhere, much like the monster you play in it. With such little marketing and fanfare, I didn’t know what to expect going in, but what I found was nothing short of incredible. From its aesthetics down to the core gameplay, there is little I could fault in it. So what is it? Well, the debuting indie devs, Phobia Game Studios, categorizes Carrion as a reverse- horror game. Although this label sounds really cool, it doesn’t say much for how it plays. In actuality, Carrion confidently belongs within the classic Metroidvania genre, where you explore an expertly designed world connected by obstacles that open up only as you grow stronger. And man, oh, man, did they do the genre justice.

One of the biggest things we lost in the transition to modern gaming is the concept of less is more. Back when there were limited file sizes, developers had to get clever to deliver strong world-building, storytelling, and instructions without taking up too much space away from the game itself. I’m not saying the big games of today are all bad, but I do see a tendency of lazy info-dumping in most games. Where they take you out of the game to read or listen to the story/instructions rather than experiencing it naturally through gameplay. 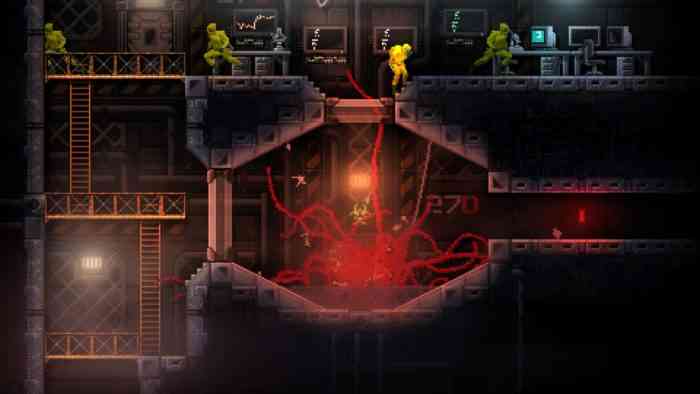 You start out the game by breaking out of your containment capsule as a small ball of teeth and flesh. No one tells you what you are, how horrifying and powerful you are, but you feel it. The scientists scream and cower in corners—even if they are behind bulletproof glass you can’t get through (yet). Your movement is incredibly quick and nimble, latching onto all surfaces, slithering up walls with ease. When you open up the first steel door you encounter, it tares open with a cacophony of shredded metal, with no effort on your part. Just by playing the opening seconds of the game, you know what you are capable of, and how powerful you are. So it comes as no surprise that when you come in contact with the first human, you confidently thrash him about and devour his remains.

This type of smart game design follows through your entire playthrough of Carrion. Even when you absorb new power-ups, the game gives you minimal instructions, but you will probably already know what to do with it. Not because the game is simple, but because it constantly teaches you how to play with an invisible hand (tentacle?) while you simply play through it.

The Horror Becomes You

The moment I knew this game was special was when I encountered these two special guards. They were armed with assault rifles that can tare your fleshy body apart and a front-facing electro shield to stop you from approaching recklessly. As soon as they saw me, they opened fire with trained reflexes and precision, forcing me to skitter into the overhead vents, screeching in pain.

I immediately realized that I had to approach from behind, but the guards were protecting each other’s backs, looking up at the vents. So I took a piece of grate I broke through and rattled it violently by one of the holes, and just as you’d expect, the guards snapped towards the vent, ready to fire. I immediately slithered to the other exit and grabbed one of them from behind, dragging her into the vent with deadly speed. She screamed, but by the time the other looked around, she was gone. He now stood no chance by himself. 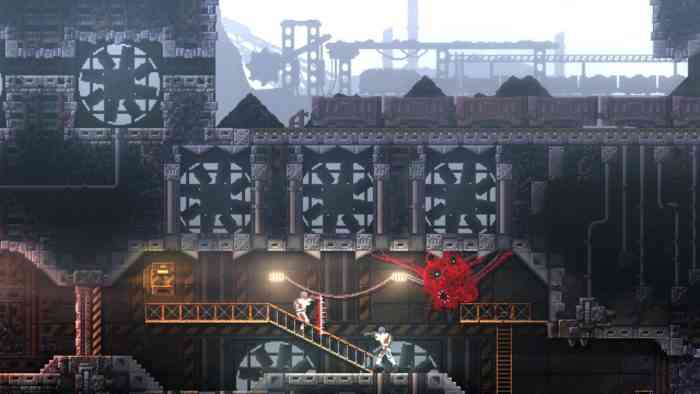 This amazing moment didn’t happen through a cutscene, or because the game told me to play this way. I didn’t even formulate this plan, it just came naturally because it felt right. The game had successfully made me think and play like a monster through its brilliant game design.

Carrion’s world is intricately designed with each combat and puzzles designed in a way to challenge you in a smooth difficulty curve. Although the stages are complex, there is no map, but you’ll find no problem navigating yourself as each environment will stand out and your will be naturally drawing up a map in your mind as you play.

With so little direction, some puzzles may take a little bit to finish but there wasn’t a single challenge that felt unfair once I figured it out. If you find yourself stuck, remember to try out your new powers in unexpected ways, and explore all the rooms you haven’t been through—remember, in Metroidvania, your new powers open up new pathways. 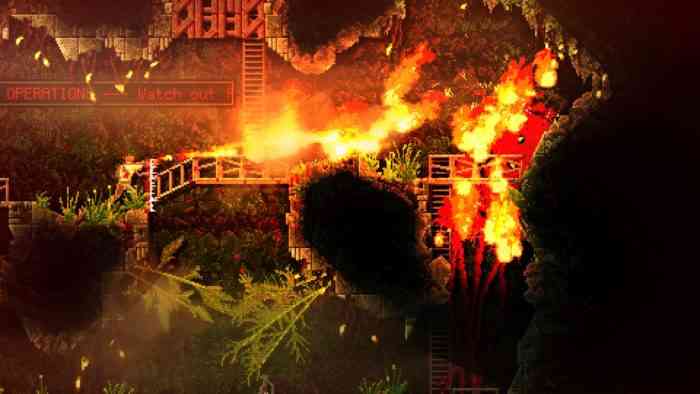 In total, the game took me five hours to finish. I know this might be a deterrent for some of you, but rest assured, the five hours in Carrion is worth much more than the time spent in conventional games made to sink your time. Every piece of Carrion is polished and near-flawless. From the amazing visuals, heart-pounding sound design, to the organic gameplay, everything in this game serves a unified purpose. In our current market oversaturated media, there is something invaluable in a game that doesn’t waste your time.