Tired of just shooting at “the bad guys” in a shmup? How about pitting yourself against not only wave after wave of enemies but other players as well? That’s the concept of Rival Megagun from Spacewave Software. As someone who fairly regularly indulges in the shoot ’em up genre, this seems right up my alley.  So let’s find out what it’s all about.

The basic premise of play is that alien Harvesters have raided the earth. Players must stop them, but you’re not the only one. Not just anyone is going to get to stop the Harvesters; only the best of the best can. To determine exactly who is best, a TV show pits two pilots against each other to battle both aliens and rival pilots. Only by defeating everyone else can you claim your chance to finish off the threat to earth. There’s not much to say on the story itself other than: it works. We are talking about a shmup here, so that’s pretty much all that’s really required — a simple, competent story that explains what is going on.

The single-player mode features seven different pilots with their own storylines, and allows you to collect cards and other unlockables. Since the basic premise is Player vs Player, the AI is subbed in for your opponent. Each pilot offers different strengths and weaknesses, including the giant mech they can turn into. Oh, did I forget to mention that before? Yes, build up your chain meter enough and you can transform into a giant boss style mech to try and take out your opponent. It’s always cool to play as a boss every now and then. 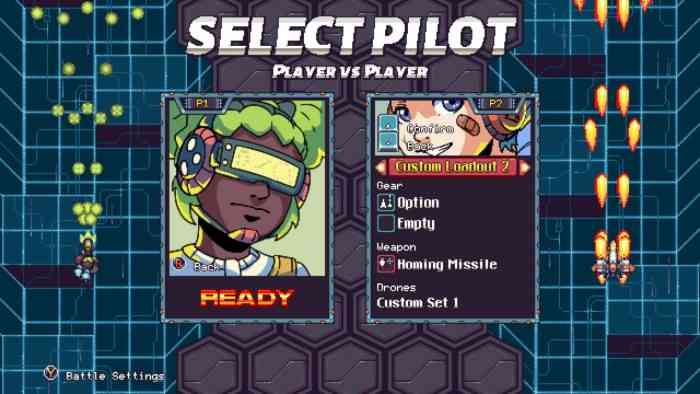 Being able to invade your opponents screen to bring down hellfire upon them seems like an awesome concept. The only issue, however, is that there seems to be a real problem with hit detection here. It takes 2 hits to kill an opponent, but it seems that after the first hit from the mech invader your opponent seems to become immune to any additional damage from you. I’ve watched shots pass entirely through rival ships with zero consequence. It seems awfully pointless to transform into a giant death machine if the game simply won’t let you finish them off at times. On the plus side, the chain meter indicating when you can transform is probably one of the best looking ones I have seen, and makes it super easy to tell when it is go-time.

Bullets passing through ships is extra frustrating when you consider that the only other way to damage your rival is by chaining together kills to spawn an army of drone attackers that they must deal with through special weapons. The special weapons are okay, but I certainly wouldn’t count on them to be successful very often. The success rate will also vary wildly based on the difficulty setting. But that’s not the only variation in difficulty. While all seven pilots do offer up those varying strengths and weaknesses, it’s hard not to notice that some, even while accounting for style difference, seem far better than others. That becomes apparent online, as everyone seems to pick from a much smaller set than the pilots available.

The online play can be the most fun, although hit detection can again be a bit of an issue. For the most part, however, it is a fairly competent shmup, despite the speed being a bit too slow. Even on Very Hard difficulty, I wouldn’t mind it being a tad faster, though that is personal preference. When compared next to trailer videos of the gameplay in the same difficulty modes, it seems that the trailer is sped up and the game actually plays much slower in real life. 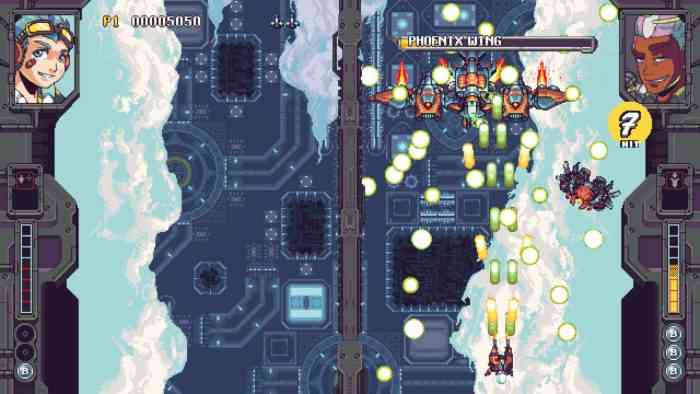 Rival Megagun does have a good look to it, though. I mentioned the chain meter standing out, but the counters and overall look are also very good. Some of the bullet colors may overlap, but I didn’t find it problematic as I seldom look directly at where my ship is, but rather where I’m going, and the bullets are going in opposite directions anyway. Along with a good look, the controls are on point too. There is no sloppiness in movement, no unnecessary inertia, none of that. It’s certainly the kind of game where you can focus on the bullets rather than yourself, and still know where you are on the screen at all times due to the excellent controls.

Overall, I did enjoy Rival Megagun, even if I did find the occasional fault. One other notable thing is that even considering the genre and the $14.99 price tag it does seem a little shallow. Not a huge drawback if you are score chasing, but it does seem like there could be a bit more somewhere. The Player vs Player aspect is going to be the real selling point, as there isn’t much out there like it. It’s probably also a little more newcomer friendly than other shmups as well. As for its place among the genre, it’s a competent shmup that wouldn’t be a bad addition to your collection.