HD Remasters of older games are so commonplace these days that they no longer excite me. Yes, there is the initial thrill of seeing an old game spruced up to current standards, but the elation only lasts for a couple of minutes. What really gets my gamer juices flowing is the virtualization of classic games and taking it from a passive pancake experience and adding a third dimension.

Last year, Doom 3 received the VR treatment for PSVR, and man, that was a blast to replay! Being inside a world, even with dated graphics, is such an immersive rush. You have to experience the impact of playing a game with real-world scale and three-dimensionality for a genuine appreciation.

Now, another classic, Resident Evil 4, has gotten the VR treatment, exclusive for the Oculus Quest 2. And what a treat it is! VR makes horror/action games so much better. To date, the most intense horror VR experience remains the PSVR version of Resident Evil 7. The more current state of that game’s graphics and sound push RE7 way past the VR presentation of Resident Evil 4.

Just as stepping into the Mars Mining Station of Doom 3 PSVR is so cool, so too is the experience of entering a full-scale version of the iconic Pueblo Village from Resident Evil 4. It’s literally like walking up to your TV screen and stepping into it. You crane your head back to look up at the tower, seeing how tall it truly is for the first time.

Developer Armature Studio has walked a tricky balancing act of converting the game to VR and remaining faithful to the original. Through the use of Unreal Engine, they have upscaled the textures without losing the aesthetics of the original game. Everything is crisp and clear while retaining the dated art style. Unfortunately, on the audio side, the datedness of the material does not translate as well to VR. Voices and sound effects sound harsh but, more problematic is the lack of any 3D positional cues. Everything sounds like it’s right beside you. 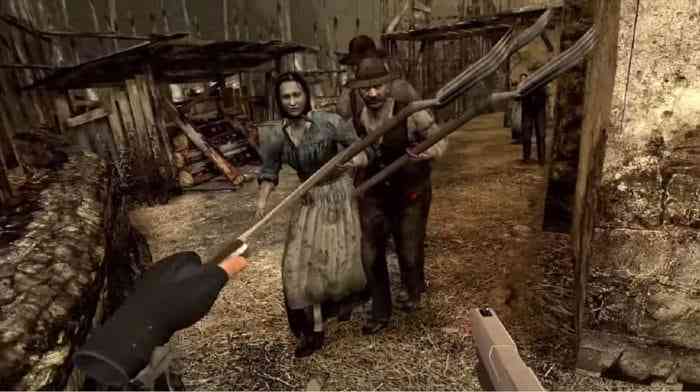 Combat, for the most part, is tweaked to take advantage of what VR offers. The most apparent and appealing change is in mobility. Gone is the movement stiffness of the original game. Now you can duck and twist and lean around corners or peek through holes with ease. Don’t be fooled, though – combat is still a tense exercise. You’ll still be hard-pressed to keep villagers out of your face if they come at you in groups.

Even with VR-enhanced control schemes, you’ll be frantically reaching for ammunition and reloading. The difference in VR is that you do the actions through physical motions that mimic doing so in real life. There is such a visceral satisfaction with grabbing ammo, jamming into your weapon, and then cocking the gun. You swing your knife to cut up enemies or break open containers, and this also ticks the same satisfaction box.

There are two available control schemes for combat. In the first scheme, the game places weapons on your virtual body in different locations. You grab them with your virtual hands. Your knife is on your chest, the handgun and ammo are on your hips, health kits are on one shoulder, and your other weapons are on the other shoulder. There is even an option to dual-wield weapons, which can come in decidedly handy intense situations. The second control scheme uses a pop-up wheel menu for item selection but seriously, why go that way when the immersive control scheme is, well, just so damn immersive?

So, one-on-one combat has been dramatically enhanced, but there are a few concessions. Basically, any special actions switch from the first-person VR view to a 2D view. Fortunately, the switch in views is quick, but these moments are immersion breakers. These view changes occur in hand-to-hand melee fighting like the kick or struggling to break free by waggling the controllers. The same holds true for climbing etc., as well as cutscenes. It would have been nice if the game rendered those moments in 3D. 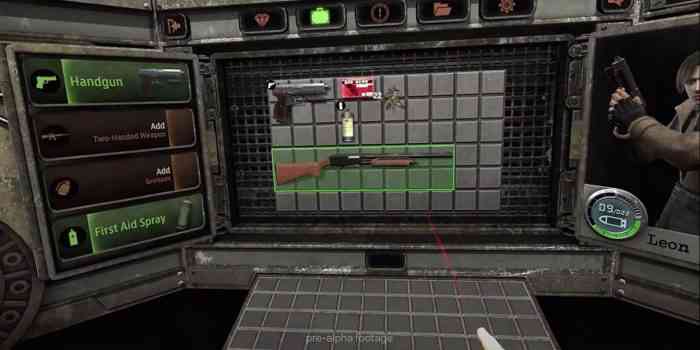 On the mixed side are the boss battles. Some become much harder – especially the boat sequence where you have to control the boat while aiming/loading/firing your weapon – while others that are more weapon-based become easier because of your increased mobility. Quick Time Events are relatively unchanged, minus the switching between VR and 2D.

What is greatly enhanced is the interaction with the environment. You pick up items such as herbs, ammo, treasures, eggs by reaching out and grabbing them. The same holds true for opening doors and drawers.

Most of the rework for the game is in the menus. Here they are visually upgraded and changed to support the Quest controllers. You can grab and move items with ease. Your video phone gets an upgrade too. You have to tap it with a finger to take a call, and the video screens present you and the handler with better clarity. Saving at typewriters has VR tweaks too. You must grab and roll the page to the desired save slot. Then, to save your game, you actually type the save file’s name out using the keys and hit the carriage return key to complete the save.

A Triumphant VR Conversion Faithful To The Original Game

Armature Studios have slightly pared the game back, as there is no – Mercenaries Mode. It’s a shame because the VR combat abilities would make that arcade version of the game a blast. On the artistic side, there has been some removal or censoring of material that is not considered appropriate by today’s standards. This type of scrubbing will rile purists for sure.

Overall, the transition of Resident Evil 4 to VR is a triumphant affair. Seeing iconic locations brought to full-scale VR life is not only a wonderful nostalgia blast but the conversion injects new life into arguably the best Resident Evil game. Fighting off the hordes of Ganados of Pueblo and the other villains of the Los Illuminados, as they get right in your face, is a gaming treat all players should experience.

***Oculus code provided by the publisher*** 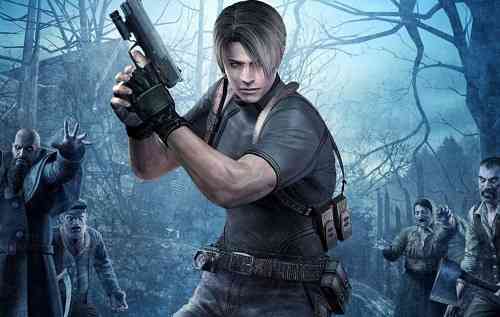