Up until now I’ve only ever used ROCCAT mice. I haven’t had a single disappointing experience. In fact, the ROCCAT Kone Pro is the best mouse I’ve ever used. Naturally, I was curious about how the ROCCAT Magma keyboard would perform. It’s very budget-friendly, it’s not only pretty but also fairly feature heavy thanks to the customization options. The Magma certainly surprised me, mostly in a good way.

As soon as you take the Magma out of the box you know that it’s going to be the feature piece with your computer setup. Even before it’s plugged in there’s a lot that stands out. It’s got more white around the black keys and it really pops. At first I wasn’t the biggest fan of this but the more I’ve used it, the more this look has grown on me. It’s got two wide feet at the bottom that can pop out to add some height and around the edges it’s got a horizontal ridged texture. The detachable wrist rest is made with this same ridged plastic and attaches and detaches easily to the end of the keyboard.

When you start to look a bit closer some of the design flaws of the Magma become noticeable. The semi-transparent white areas of the keyboard are neat in theory but they actually end up showcasing some of the interior components. This helps with the brightness levels of the RGB lighting but seeing dark spots where the keyboard is being held together doesn’t lend to a sense of quality. And before it’s even plugged in these spots are hard to miss. Additionally underneath the space bar and large keys the metal switches are much more visible than I’ve seen with other keyboards. Not the end of the world, but just another thing that may have been overlooked during the design process. After you plug this bad boy in is when all the magic really happens and you may be ought to forget some of the build flaws. It’s bright and colorful and though this might be a distraction for some, this is one of my favorite things about gaming accessories (outside of the performance of course).

The Magma overall is lightweight and is made with a hard, thick plastic. While it doesn’t feel like it’s about to snap in half by any means, it also doesn’t feel like the most durable or high end quality keyboard I’ve ever used. The exterior bends slightly with ease and even though the key caps are made well the rough edge of the space bar is hard to ignore. With that said, I haven’t had a single problem with it yet. On top of this, the wrist rest that it comes with is not padded. I did find it more comfortable to have it attached than to have my wrists resting on my wood table however, if ROCCAT went to the effort of having a wrist rest, which I do appreciate, it should probably have some padding instead of just hard plastic. What the design does allow for however, with its extra space underneath the keys, is easy clean up. And that is never a bad thing. 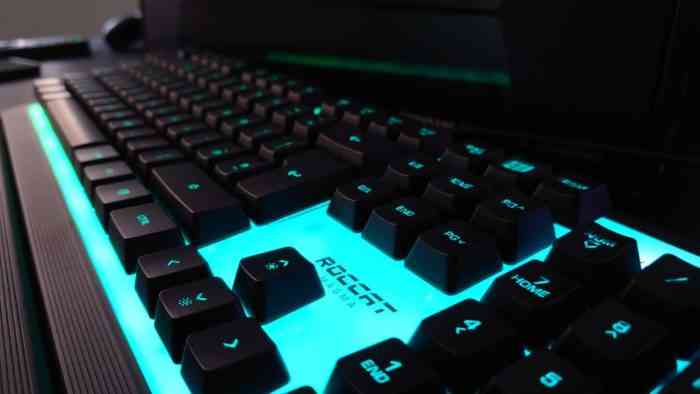 What’s even better is how the Magma sounds and performs. It’s not quite silent however it is very quiet. Your family and friends certainly aren’t going to be upset with the noise level at all. This is, in no small part, thanks to the silent membrane keys. The keystrokes aren’t delayed at all and each click is quick and accurate. You can tell the anti-ghosting technology is working with every button press too.

Now if you want to change the speed at which held buttons will repeat, set up the keys to your personal preference or customize the lighting for the Magma, the ROCCAT Swarm Engine is going to be your best friend. It’s simple to download, set up, and use. You can customize up to 5 different gaming profiles. Though I didn’t really get a whole lot of use out of the key assignment feature, there are actually a bunch of plug and play options available. Despite no separate multimedia keys here it’s quick to assign a couple to any key and there are options to set timers, specific ROCCAT function keys and system/OS commands. And that’s all in addition to the key illumination customization. Bottom line, the AIMO intelligent lighting system is the best choice but Wave and Fade FX are close behind. Each of these is colorful and exciting, without being too terribly distracting. There are ways to change most of these preset lighting options based on the 5 zones as well. 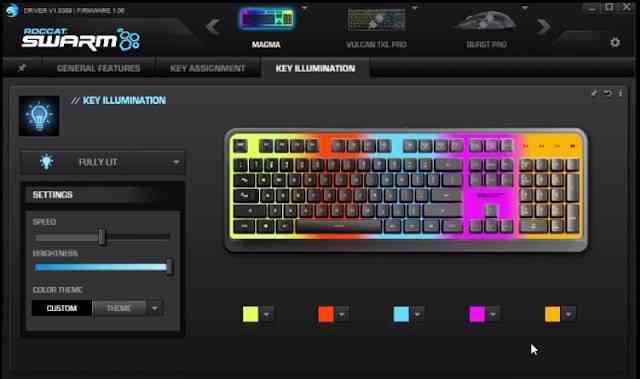 As if you couldn’t be more impressed with the ROCCAT Swarm Engine, there’s also a general features tab that offers customization for sound feedback. Here you can add sound effects like Sci-Fi, Beam or Typewriter. I give ROCCAT marks for creativity because this was really fun to set and use. Maybe not while you’re gaming, but for casual typing I found myself chuckling about it. You can never have too many choices, right?

It’s undeniable that the ROCCAT Magma offers a big bang for its buck. Sure, the wrist rest isn’t the most comfortable and it doesn’t have an extremely high build design, but what it lacks in feel and comfortability it more than makes up for with it’s eye-catching RGB lighting, it’s customization and performance. It’s definitely a great option for gamers just starting out or for anyone looking for a snazzy upgrade that doesn’t take you for all you’re worth. Considering it’s just $44.99 USD right now it’s honestly a steal. 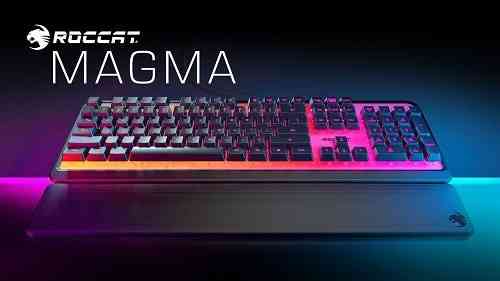