ROCCAT has continuously proven time and time again that they know how to make great gaming accessories. Despite never owning anything other than a single ROCCAT headset, I’ve become a pretty big fan of the brand as they continue to offer up accessories that aren’t just eye-catching, but performance-forward as well. With the new Kone Pro mouse (and its wireless counterpart – the Kone Pro Air) officially out on the market I was curious just how it would perform next to its competition and my current mouse as well. Without giving too much away at the hop, it’s pretty darn impressive.

The Kone Pro wired mouse is definitely going to catch your attention as soon as you take it out of the box and plug it in. It’s colorful, and it’s sexy. It’s super lightweight, coming in at just 66g, but you can tell from the get-go that it’s made to last. It features a solid honeycomb shell that’s visible only on the right and left mouse buttons themselves when it’s lit up, and has some horizontal lines on the side, giving it some added texture as well. And it’s not just stylish, it’s also ergonomically designed, which means you can game for hours without suffering from hand fatigue.

The Kone Pro doesn’t try to overdo anything either here. It offers up a simple, yet stylish, design complete with an additional two buttons off to the left side of the mouse for easy accessibility for your right thumb. These are often used to go forward and backward, without clicking the usual right or left mouse keys, and thanks to the free ROCCAT Swarm driver software, they’re also mappable.

Of course, this software also allows for complete customization of every aspect of the mouse. Looking to set up a specific profile for a certain game genre? What about updating the color or DPI settings (up to 19,000 max)? You can do all that and more with the ROCCAT Swarm software. Plus, if you weren’t exactly sure which DPI or mouse speed is best for you, you can calibrate both with a few short clicks and flicks of the mouse. I love the personal touch this adds, but even if you don’t know how to use this software and are looking to change your color or DPI settings, there’s a handy set of instructions that come in the box to help adjust these manually. 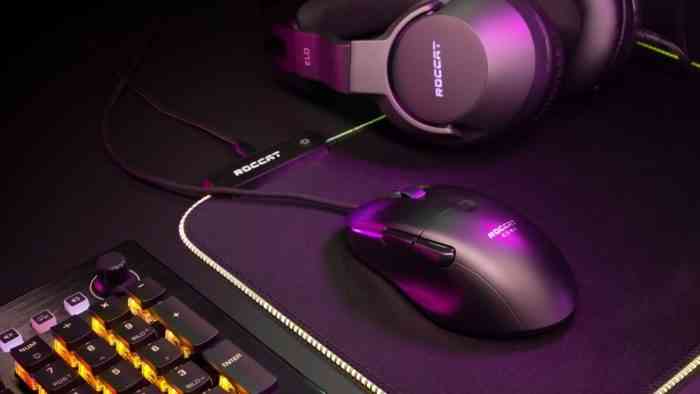 So what do you get when you combine an ergonomic, lightweight design, customization capability and ROCCAT’s very own titan switch optical technology? Incredible performance, plain and simple. The Kone Pro is easy-to-use, lightning fast, and very versatile. It glides easily across a variety of surfaces, including the typical mouse pad, laptop and table surfaces, as well as on a sheet (while lying in bed of course), a couch arm and even your leg. Yeah, it works on all of them without decreasing its performance. That said, I doubt you’d actually want to play League of Legends, or Apex Legends with a mouse on your leg. You could though, and that’s what matters. The fact that it’s wired too is hardly noticeable as the phantom flex cable glides just as easily as the rest of the mouse, and that’s exactly how every wired experience should be.

The Kone Pro is accurate and as it reads on the box, it’s the best in speed. Response times are non-existent, with every move of the mouse happening exactly as you want it to, without a single delay. And if you’re wondering just how it sounds, well despite its satisfying clickiness that’s supposed to last at least 100 million clicks, it’s not loud or obnoxious. Which means you can click that 100 million times without worrying you’re going to annoy your significant other, roommate, or family. Really the only “negative” thing I noticed is that the mouse buttons start to show some oil spots after a day’s worth of play. This may start to wear on the mouse as time goes on, so make sure to give your Kone Pro a rub down after every session to avoid this.

If you’re looking for a mouse that’s super sleek, made with the professional gamer in mind and doesn’t require you to spend a ton of money, the Kone Pro is the perfect fit. Performance-wise there isn’t a single mouse out there that compares, especially when you consider all the things on offer with the Kone Pro for just $79.99 USD. I honestly don’t think you’ll go back to anything else after using this mouse. Unless you want to pay an extra $50 USD for the wireless experience, that is. After all, I have it on good authority that the Kone Pro Air is just as great. 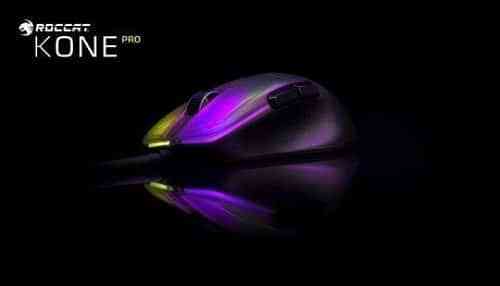