Classic RPGs occupy a special place in the hearts of gamers; the hours we sunk into Chrono Trigger, the Final Fantasy series, and other epic 16-bit adventures are some of our fondest gaming memories. But the genre has fallen on hard times of late, its brand diluted by the flood of pay-to-win casual titles that look to prey on our nostalgia – only to break our hearts, again. Rainbow Moon, from SideQuest Studios, is not such a title. This is the real deal, a retro-inspired tactical RPG (although from a German studio) with depth, solid gameplay, and polished execution that will remind you of some of your favorite old-school titles. Be careful though; its paper-thin story, difficulty-spikes and need for grinding will also bring back some less-fond memories to slightly dampen what is, overall, a very satisfying experience.

Visually, I loved Rainbow Moon right from the moment I stepped through the time portal-dimensional gate thingee and started exploring the massive world that serves as the game’s environment. The isometric view looks down on colorful and bright characters, detailed terrain and other eye-candy that never gets boring. Exploring this world is fun and addictive; the developers vary the look and feel of the environments perfectly, so you are treated to ever-changing visual adventures that range from jungle to seaside towns to mysterious dungeons and more. Character and object models are beautifully rendered, but never too polished so that they look cartoony. The cynic might point out that none of this is a change from the PS3 version, of which this is a port. Fair enough, but I felt that Rainbow Moon’s visuals looked right at home on the PS4.

“Exploring this world is fun and addictive; the developers vary the look and feel of the environments perfectly, so you are treated to ever-changing visual adventures that range from jungle to seaside towns to mysterious dungeons and more.”

Exploring all of those wonderful environments would not be nearly so fun if Rainbow Moon made you enter into combat constantly – if you have played many RPGs, you know exactly what I mean. But combat in this title is player-initiated on the overworld map, so you can feel free to wander without having to count your steps and cross your fingers for the next unwanted brawl with yet-another irritating monster. When you do decide to engage an enemy, the field shifts to a tactical arena in which you face off against anywhere from one to a horde of baddies. You have move, attack, defend or special skill options. It feels, like much of the experience in Rainbow Moon, familiar and inviting; anyone who has played Final Fantasy Tactics or the Ogre series will be right at home. The one thing you won’t see, though, are the actual tiled surfaces of those earlier games, so figuring out which buttons move you in which directions takes a bit of getting used to.

Rainbow Moon’s combat is also not as complex or challenging as those older tactics RPGs, either – which, to be honest, I actually liked. In fact, things start off pretty gently, as the first hour or so of the game acts almost like a Tutorial. You will take on small groups of monsters, mostly as one character – Baldren. You are limited at this stage to one move or one attack per turn. Gradually, as you put more hours into the game, your level will go up from experience points, and your options in battle will increase – like more movement, and more attack methods. You’ll also get new members added to your party, each of whom has their own profile of skills and stats that you will need to consider when doling out upgrades. 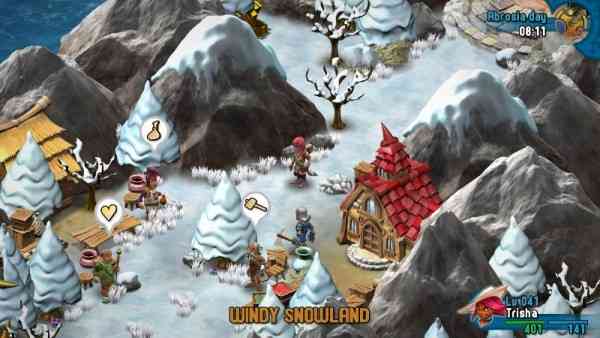 Slowly – ever so slowly – Rainbow Moon transitions from a simple, cute retro RPG to a pretty complex and demanding adventure that could easily start to eat into your free time. The battles also morph from simple encounters in which you whack foes until they disappear, to mind-bending little chess matches that require prudent strategies utilizing movement and retreat, as well as attack. You might even find from time to time that you are, in fact, outmatched. That is where you will have to put the exploring on hold for a while and grind. This is probably the least awesome part of Rainbow Moon, and definitely accounts for some of the massive length that the game boasts.

But grinding in Rainbow Moon is at least made a little less tedious due to the well-constructed leveling and upgrade system. You have many ways to build up your character – Rainbow Pearls can be taken to the “Savant” character and used to increase your stats. You can purchase new and better weapons and armor with gold you get from combat, or even just find laying around on the map. Experience points level you up and increase your hit points. All of these things help to make you feel like you are always making progress in the game, and it isn’t too long before your grinding is over and you can resume your exploration once more.

“Once you truly get into the experience of playing this game, you will be astounded by just how much content there is packed into its unassuming exterior.”

Another strength of the game is the straightforward and satisfying quest system. You have a main quest to follow, marked by an exclamation point on your World Map. But along the way, you must engage in a number of side-quests to make progress on the map. These side-quests are your typical “fetch this, talk to that guy” type stuff, but at least the well-constructed mechanics made my progress through the game an enjoyable one that was free of the frustrating dead-ends and unclear objectives that can taint many an RPG. You also get cool items from doing those fetch-quests for the townsfolk, so there are real rewards for all that monotonous trudging through the forest.

Story-wise, Rainbow Moon is, unfortunately, also reminiscent of old-school RPGs (at least many of them). The initial set-up, told in an animated cut-scene, is hard to follow – something about a warrior named Baldren who is sucked through a dimensional portal and finds himself on a strange planet for some reason. I got the feeling that the developers themselves weren’t even that concerned about the story – it’s just a quick set-up to get you started on killing bad guys and grabbing loot. If you accept that fact, then you will be just fine with Rainbow Moon – it is a fun time, but just don’t expect to be blown away by an epic tale. 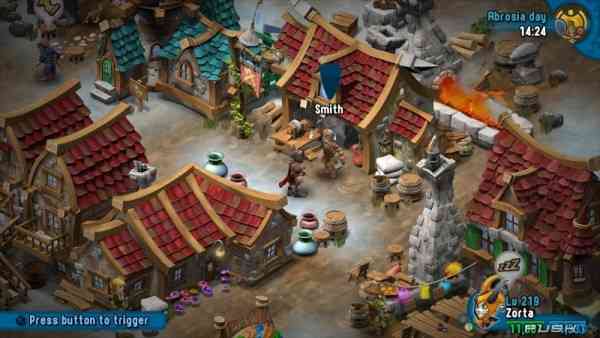 Overall, Rainbow Moon is a massive RPG experience that is worth checking out. Once you truly get into the experience of playing this game, you will be astounded by just how much content there is packed into its unassuming exterior. I am nowhere near the reported 100-plus hours of play time that Rainbow Moon promises from start to finish, but I am impressed by how little I am tiring of it after the many hours I have played. SideQuest Studios has accomplished the rare feat of giving gamers a long and deep experience that manages to keep the experience fresh, even well into the player’s time-investment. And, at the $14.99 price tag, it is hard to argue with so much gaming value for your money.

If you have been searching for a retro-inspired tactical RPG that actually delivers the goods, then look no further. Rainbow Moon will push all of the right nostalgic game-play buttons. Just be prepared for a pretty thin story, and a lot of old-school grinding as your time investment – and the game’s difficulty level – increases. 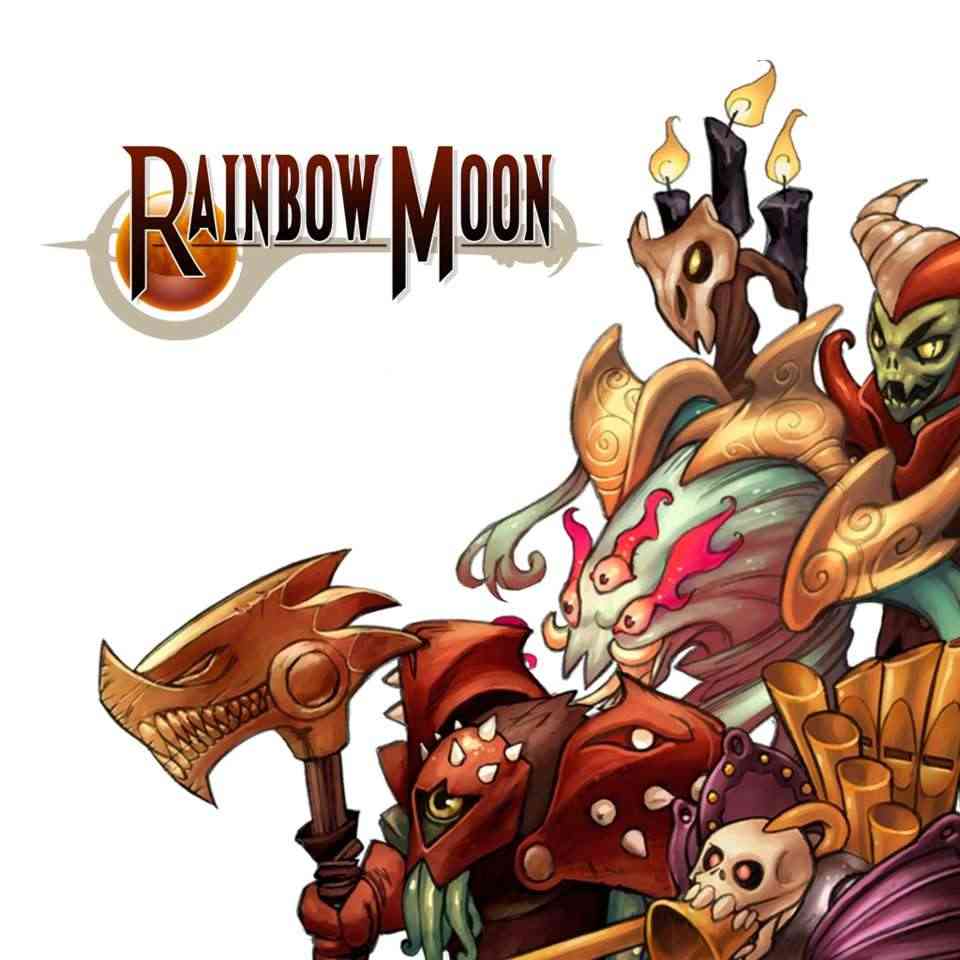 Escape Academy Review – Graduating With Honors
Next Return to PoPoLoCrois: A Story of Seasons Fairytale Review – A Charming Crossover
Previous We Are the Dwarves Review – Rough and Unpolished, But Still a Gem