Fans of puzzle games probably don’t need much of an introduction to the Puyo Puyo series, as it’s probably one of the most popular puzzle franchises that aren’t Tetris. Personally, my first Puyo Puyo experience was Dr. Robotnik’s Mean Bean Machine – the American version of Puyo Puyo from the early 90s that I used to play all the time on my Game Gear – well, at least for as long as my six double A batteries would last, which really wasn’t that long at all. The Puyo Puyo franchise has seen no less than two dozen different games spanning the past three decades, and that all culminates to the brand new, multiplayer-centric Puyo Puyo Champions. If you’re looking for a new addiction, this might be it.

The first thing to note about Puyo Puyo Champions is that it really doesn’t bring anything new or fresh to the franchise. It’s really just a repackaging of two classic Puyo Puyo games; Puyo Puyo 2 and Puyo Puyo Fever. However, it adds a pretty substantial multiplayer component to the mix, which isn’t necessarily new to the franchise – but it’s never been as refined as it is here. For those unfamiliar with Puyo Puyo, the objective is to chain together a set of Puyos, the colourful slime-like creatures. Doing so will send the white “junk” Puyos to your opponent’s screen. Once your opponents Puyos reach the two X’s at the top of the screen, you win. 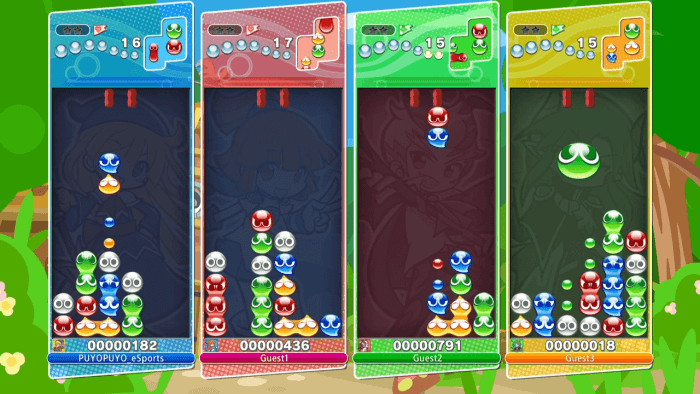 The difference between Puyo Puyo 2 and Puyo Puyo Fever is relatively minor. Puyo Puyo 2 is a much more simplified approach to the game, featuring two Puyo chains that drop from the screen’s ceiling. Puyo Puyo Fever adds larger three and four piece Puyo’s chains to the mix and a Fever mode which is a sort of mini-game that, if handled successfully, can really bring the hurt to your opponent. Puyo Puyo Champions offers a couple of minor single player modes, but these are really more to learn the game and don’t have much substance to them beyond the Puyo Puyo gameplay. One mode allows you to just play one-on-one against a CPU player in a simple singles match. The other single-player mode is designed to test your endurance – as soon as you defeat a CPU player, another one steps in, yet your screen doesn’t even clear. The endurance mode is easily the best single-player mode, but it doesn’t even retain any sort of leaderboard to push players to improve their previous efforts.

I’ve Got a Fever

Puyo Puyo Champions is heavily focused on multiplayer. While previous games have had multiplayer aspects, both against human and CPU opponents, this version really ups the ante with a variety of multiplayer options. Up to four players can compete locally or online in either Puyo Puyo 2 or Puyo Puyo Fever matches. They’ve included a team option, which allows players to join forces while still playing on their own screen. Party planners will be happy to know that Puyo Puyo Champions also includes an 8 player offline tournament mode – might I suggest a drinking game where everyone takes a shot when someone activates their “Fever” mode, that could get pretty wild. Online modes include a casual mode and a ranked mode. However, despite its heavy multiplayer focus – during this past week, I only found one other person to play against (shout out to SweatyNutria883!), so hopefully, the fever catches on and more people pick it up – otherwise, Puyo Puyo Champions might have a very short shelf-life. 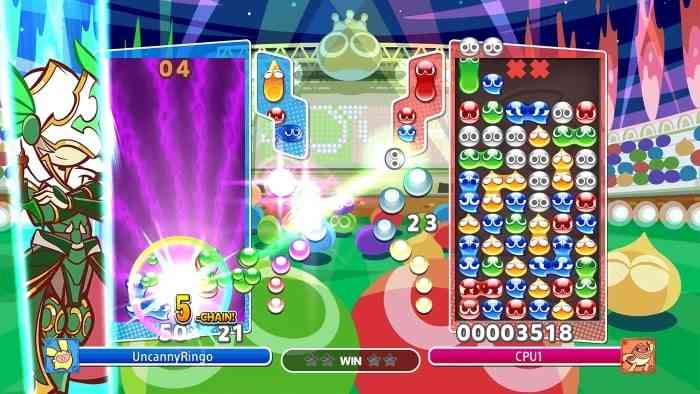 One of my favourite aspects of Puyo Puyo Champions are the visuals. Everything is so bright, colourful and vibrant. There’s a variety of different characters and gameplay backgrounds to choose from. But my absolute favourite visual touch is the vast assortment of different Puyo variants to pick from – with my personal favourite being the classic “Game Gear” look that makes the Puyo Puyo look reminiscent of their past handheld days. Conversely, the least appealing aspect of Puyo Puyo Champions is the audio department. While the music is fine, it does get pretty repetitive during lengthy matches – some added music variety would be nice. I don’t mind the various beeps and boops of the gameplay, but the voice work is incredibly annoying. Every time a chain is made, and consecutive chains, the character yells the number (ONE, TWO, THREE, etc). When a character nails their final chain, they’ll yell some silly quip – and it’s the same silly quip every time – it’s just awful. Even worse, you can’t turn the voice audio off without turning off all the other in-game sound effects. After a little while, I just had to turn the voice/sound effects off and just left the music playing.

I really enjoyed Puyo Puyo Champions. Admittedly, I do generally enjoy puzzle games, and I’ve enjoyed Puyo Puyo games in the past, so I was excited at the prospect of Champions. My only concern is that it is such a multiplayer-centric title if more players don’t join in soon, it might be near impossible to find other players to play against. Fortunately, the title is offered at a very reasonable price, so if you’re even the slightest bit interested, it’s just a small investment. I would have liked to see a bit more depth in the single-player features, but I understand the focus was primarily supposed to be multiplayer. My biggest grievance is the games audio – and if I could turn the voicework off while leaving all the other gameplay sounds on, I’d be much happier. If you’re looking for an addictive puzzler to compete against friends and strangers, you really can’t go wrong with Puyo Puyo Champions. Highly recommended!

***Puyo Puyo Champions Xbox One code provided by the publisher*** 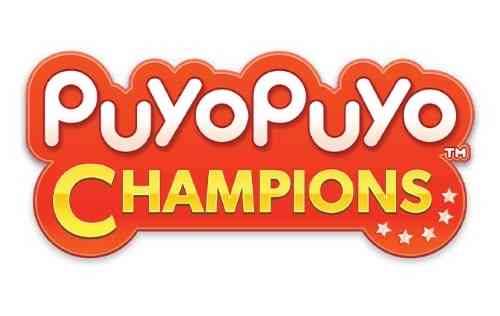