Like Metroid type games? Like cats? Then indie developer – Doinksoft, courtesy of Devolver Digital has the game for you.

Gato is old school 2D platforming. Perhaps too old school for modern sensibilities. Some may find the decidedly anachronistic white only graphics attractive while I found all the white on black off-putting.

In Gato Roboto, the main character is Kiki, pet and friend of Captain Gary accidentally causes their ship to crash on a lonely planet with very little to it beyond an abandoned research station. With Captain Gary trapped, it’s up to Kiki to redeem herself and get the necessary parts to repair the ship.

But what chance does one little kitty-cat have to survive a hostile journey, some of it underwater – a bane to all cats? Fortunately for Kiki, she can make use of exoskeletons to protect herself and traverse the dangerous environments. As Kiki travels through a dangerous underworld she will encounter many aggressive creatures and face treacherous obstacles. At times, Kiki will be facing the tough choice of leaving the safety of her mechsuit to explore tight tunnels and feline abhorrent waterways to acquire much-needed weapons and helpful gear.

Guided by her master and Captain, Gary, Kiki explores the maze under the outpost she will discover that it has a dark history. Gary stays in contact with Kiki via her radio collar. Do the station guardians left behind have anything to do with the mystery? Will Kiki successfully use a combination of her nine lives and mech armour to survive? Will Kiki suss out all the secrets that lie hidden waiting to be revealed? 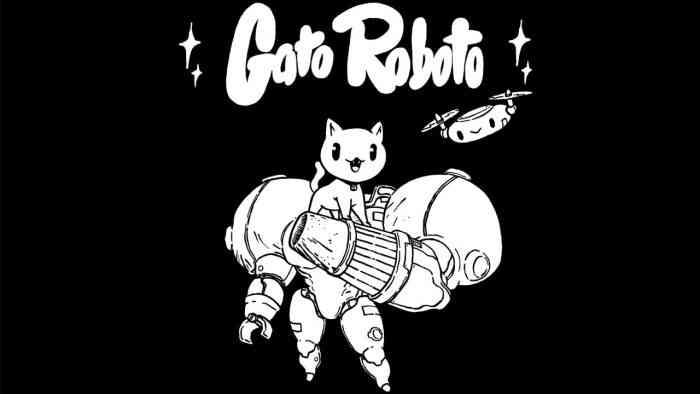 Gato Roboto is polished, and there is no doubt a certain naive charm to the game, aided by catchy music and sound effects. The environments and enemies are rendered with a defined style that lends character to the game. The game also controls well which is a necessity as enemies come at you from all directions. But, and it’s a big but, the monochrome white of everything strikes me as bland. Because of it, nothing stands out. Not the environments. Not the enemies. And especially not Kiki. Fortunately, there are unlockable color palettes that spice things up. Too bad they were not options right off the start. The game would have made a better impression. If all of this sounds intriguing to you, and you’re a dog lover and not averse to cats, Kiki is ready to kick off her adventures on the Switch and PC. This is a solid game that doesn’t introduce any new elements beyond having a cat as the main character controlling a mechsuit.