Overload Review – It’s Been a Long Wait For Fans

Originally Kickstarted as a “spiritual successor” to the original 1995 game Descent, Overload is a modern take on the six-degrees-of-freedom first-person shooter, giving the player independent control of all six movement rotational axes while doubling as a flight simulator. You, as the player character, fly into different colonial outposts across the moons of Saturn to fight rogue AI and overload their bases’ various reactors. Out for the PC, Overload has as-of-yet undecided release dates for the PS4 and the Xbox One, but its dedicated backers—only 4,896 backers raised 306,537 dollars—have had early Steam access as the game’s final kinks were worked out.

The story begins with the player character waking up from cryogenic stasis with the dual luck of memory loss and a ship’s AI telling him that there are colonies in danger and that he is, of course, the one that has to save them. Until much later in the game, the story really does solely consist of flying your ship into different outposts in space to defeat auto-operators, standard AI ships whose names are shortened to “auto-ops”, which have risen up and begun shooting anything on sight. Your main goal in each outpost is usually to overload the reactor, a phrase that would feel like a title shoutout if only you didn’t hear it quite so often. The plot picks up after about halfway through the game, but it feels like it takes a lot longer to get there, and the story, while more interesting than Descent, isn’t anything you haven’t seen before.

The plot is not the point of this game, however. This game is a Descent seq—I’m sorry, spiritual successor—through and through, and the point of Descent wasn’t to be enraptured in the story. Details big and small mirror the original game, from the loadout screen’s descriptions of each new weapon and the level design to shield powerups and even the purple electricity that appears as you materialize in each new outpost. This dedication to Descent is both the biggest strength and weakness of this game. For those who loved Descent, Overload is a beautiful update to the original, chock full of new weapons and upgrades that make it an excellent trip down memory lane. And certainly, playing a game that does such a great job of hearkening back to classic days is enjoyable, but the essentials of the original have only been improved, not changed, eschewing modernity for nostalgia. The level design particularly suffers from this. The first level is fun to explore, but after the fourth or fifth nearly identical space station interior you begin to remember some of the flaws of old games—namely, their limitations on graphics. These limitations are gone now, or at least, very different these days, but the developers of Overload don’t do anything new or exciting with the levels until the very end, where even the new purple color scheme feels exhilarating after playing so long with a gray and silver palette. The game looks very good but even beautifully rendered cave walls eventually just become cave walls. The absence of a gripping story could have been forgiven, but when there is so much repetition in the game itself, it stands out as lacking.

The sound design of Overload is its most significant accomplishment. The music, created by many of the same composers who brought music to Descent (you might have guessed a theme by now), such as Allister Brimble, does a fantastic job of setting the tone of the game with ominous, action-packed ambiance. The voice acting also deserves a special shoutout—while the plot isn’t engrossing, the individual segments of dialogue the player character encounters as they explore is almost always worth a listen, with the performances delivered sincerely and convincingly. The actors often worked with difficult material exceptionally well, and I looked forward to new levels because, even if I’d be in a nearly identical environment, at least there’d be a new head engineer or lead biologist to dip into the life of.

Do a Barrel Roll!

Controls-wise, there is a learning curve for mouse and keyboard gameplay, but it is satisfying to pick up and dodge the encroaching ships while shooting back with a wide array of weapons. My favorite ended up being the first one you pick up, Impulse, just because I enjoy the dual blue beams that remind me of some early arcade games. The six degrees of freedom really does mean that dodging becomes a major component of the game, to the point that not getting hit while being ganged up on by robot ships can sometimes be more important than shooting back at them. The enemies, like the levels, start out interesting, but their various forms and designs turn into a loadout screen blur as the flavor text loses its appeal and I just paid attention to what kind of damage their guns deal. The gameplay itself is balanced, with typical difficulty progression, but the actions you do in the game—shoot AI ships, find survivors, overload the reactor—became so repetitive that I no longer cared. 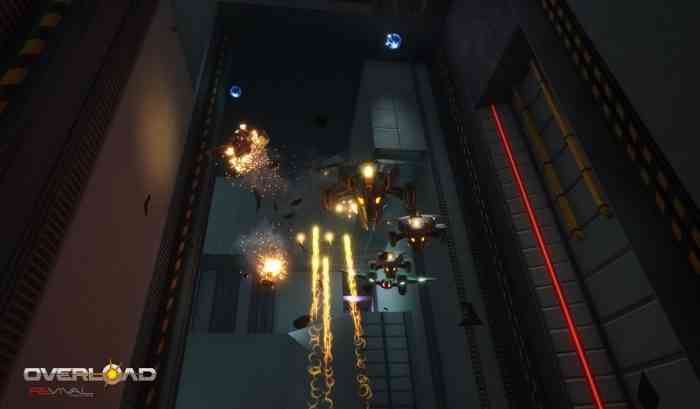 Overload‘s other modes are where the game shines best. The challenge mode hasn’t reinvented the wheel, but it will appeal to someone who already likes the game, and is certainly designed well in its ability to test your skills in surviving against endless enemies or countdowns, and the blizzard level shows that there is some variation in their designs, even if it is just the addition of ice over space station floor. It is hard to believe the multiplayer was a late addition when it’s clearly a highlight of the game, giving Overload a higher replay value after finishing the story and allowing Descent fans to face off with their long-acquired skills. However, the multiplayer and the challenge modes face the same problem as the story mode: if you don’t already like Descent or six-degrees-of-freedom games, you probably won’t be drawn into them through this.

As a “spiritual successor” to Descent, Overload accomplishes what it sets out to do, bringing it twenty years into the future with new graphics, weapons, and gameplay. However, it seems to have skipped many of the lessons that game developers have learned along the way, failing to adjust the game for modern expectations as it succumbs to the repetitive level designs that so characterized past limitations. While I doubt it will have any trouble bringing in loyal followers, Overload might find it more difficult to attract new blood.