I feel like EA Sports NHL franchise has been stuck in cruise control for a couple of years now. This isn’t necessarily a bad thing. Ever since NHL 15, which may be considered one of the worst in the franchise, the series has essentially played it safe. They’ve definitely made improvements since 15 but we haven’t seen any game-changing innovations in a long time. For the past two years, review scores have been nearly identical. Likewise, sales numbers have remained steady. So naturally, I went in this year fully anticipating I would not see NHL 19 game rebooted in any way.

Like most of EA Sports games, it is all about making those incremental improvements from year to year. Sure, NHL 19 brings a suite of new additions that unquestionably improve the experience. It looks, plays and offers more depth than ever. But was I blown away with anything I saw in the game? Not really but that is okay as NHL 19 should be enough to keep the hardcore fans coming back while maintaining a hockey game that is accessible for newcomers.

When I step away for a minute and take stock with where the NHL series sits on EA Sports priority list, it’s clear it is near the bottom. It boils down to resources and to be perfectly honest, it certainly appears the NHL dev team is shortchanged a bit. The NHL Ultimate Team mode is nowhere on par with Madden’s Ultimate Team which offers far more depth and variety. Likewise, a single player story, like we’ve seen in Madden and FIFA would be absolutely perfect in NHL 19. Again, this is not to say NHL 19 is a decent game. In fact, it’s rock solid but I cannot help but think what more could have been done if EA Sports had dug a little deeper into their wallets.

Cuts on a Dime

As I say that, I still don’t want to take anything away from the game. NHL 19 is a smoother and more authentic hockey experience. Most notably, the skating mechanics have improved this year. Using Real Motion Tech (which was also used in Madden and FIFA) players seem to turn on a dime and more realistically work out of tight corners. Skating in previous NHL games felt a little stiff and you don’t get that this time around. I felt more in control. The player’s crossovers and carving look close to the real thing. Turning and cutting is easier than ever. 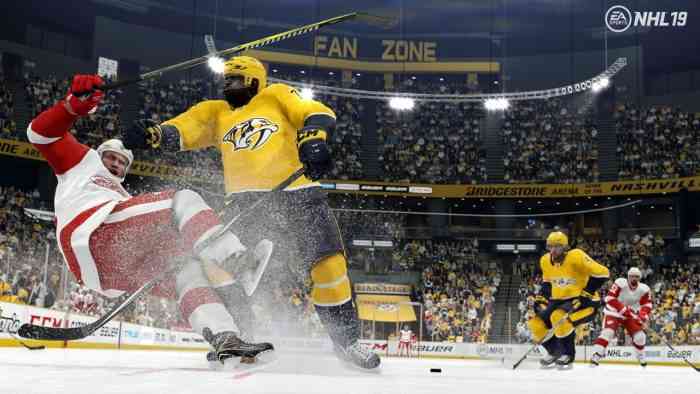 The shooting and passing mechanics remain, for the most part, unchanged and I am quite happy about that. I’ve often felt NHL nails those passing and shooting mechanics. So I’d hate for the dev team to tinker with that area needlessly. I did; however, notice that there were far too many blocked shots. I get it, there are a lot of blocked shots in the NHL but NHL 19 seemed a little over-the-top in that department. NHL Threes made for a frustrating experience at times because if there was a defender even remotely in your way, he’ll block the shot – every time.

The hitting does seem a little more realistic this time around. Players used to fall to the ice in a similar ragdoll-like fashion and you do see a bit of that in NHL 19. There were times my player would slowly collapse after a hit and I’d be yelling at the screen like a maniac for the player to get up. That said, there is more variety in the types of hits you’ll see on the ice. I saw players getting clipped and flung around like a helicopter. You’ll also see big players paste smaller players against the boards. It makes for an experience that feels a little less scripted and it is pretty satisfying pulverizing a player like Marchand to the ice.

I spent most of my playtime in ‘The World of CHEL’ mode and I didn’t expect that. I am usually a franchise mode kind of a guy where I just want to play with my favorite team and grind away through an 82-game regular season. Surprisingly enough, I really loved CHEL, which apparently short for NHL. I know, it’s a bit weird, but whatever I liked the mode. It has a slick social hub that includes EASHL, Threes pick-up games, an NHL Pro-Am mode, and Ones. Threes was introduced last year, so I don’t need to get into that mode but NHL Pro-Am allows you to hone your skills against the A.I. before jumping into real competition. This mode offers 40 3 on 3 challenges with unlockable content as you progress.

One CHEL of a Time

Ones, which is one of the game modes offered within CHEL, is an absolute blast. In this mode, you’ll showcase your talents against others in a three-for-all where the player who scores the most goals in 3-minutes wins. I had a time playing the mode and loved the short game formats. As you win these 1v1v1 competitions, you earn points that contribute towards your rating. This progressions system has you jumping back in over and over. The games themselves are f-king bananas. There are no penalties, no stoppages and it’s essentially a free for all. So if you are good at smashing folks into the boards and dangling past opponents, this mode is for you. 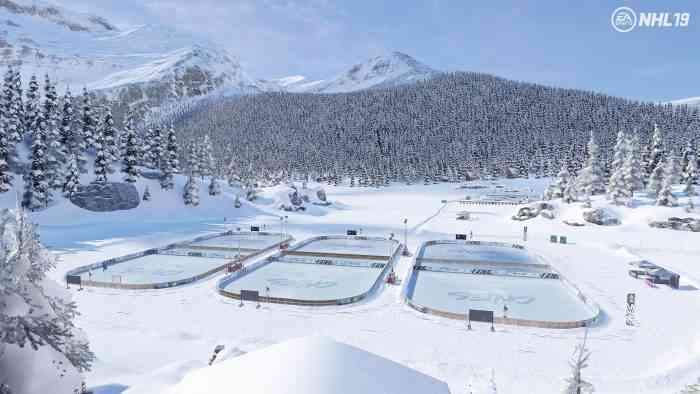 Some other things that jumped out at this year would be the number of customizations and the inclusion of over 200 legends. NHL 19 apparently features over 900 new items. I didn’t count them but it does seem like a never-ending selection of hoodies, jackets, parkas, knits, skates, sticks and more. So if you are the type that loves to spend some time in the character customizations screens, you’ll love what NHL 19 has to offer. Likewise, I loved the fact I could play with players like Patrick Roy, Mario Lemieux and Guy Lafleur. Yes, NHL legends have appeared in previous modes like Hockey Ultimate Team before. But now, thanks to an agreement with the NHL Alumni Association, you get legends back in the franchise and it’s awesome!

NHL 19 offers so much more than what I already discussed but you get the point. There is truly something here for every hockey fan. Traditionalists who love their basic online and franchise modes, NHL 19 has you covered. For those looking for something fresh, World of CHEL and Ones should be right up your alley. NHL 19 doesn’t exactly reinvent the franchise but it does advance the series forward in this generations of consoles. NHL 19 is as solid as it gets yet I cannot help but wonder what could have been done with more resources.

**Xbox One code was provided by the publisher**

NHL 21 Being Revealed Next Week

NHL ’94 May Be Getting a Re-Release