If Fallout is one of the most successful and iconic post-apocalyptic franchises of our time, then Wasteland is the less-sexy, intellectual big brother that sets the example for open-ended role playing games set in the aftermath of nuclear war. Directed by Brian Fargo, the mind behind the original Fallout, Wasteland 2 is a classic RPG with a beautifully crafted script, weighty decisions and a thoughtful combat system.

In the arid landscape of the American Southwest you roam the wasteland as members of the Desert Rangers, a faction established by ex-U.S. army engineers who aim to keep the peace and help others rebuild. Though the Rangers are generally seen as an upstanding organization, past actions and decisions have built distrust among certain citizens that reveal their reservations as you progress through the game.

The story is compelling: it not only recognizes the realistic imperfections of a seemingly heroic faction, but it constantly puts you at a crossroads where the decisions you make have substantial consequences. There will be plenty of times you must choose between helping one person or group over another and then must live with your choices by listening to the distress calls of the group you did not pick.

While text is favored heavily over audible dialogue throughout the game, the less-frequent voice acting is powerful and emotional.  In old-school RPG fashion, text describes all of the actions, encounters, and surroundings of the party. At first, I ignored most of the text blocks due to my impatience, but after I began to carefully read each word that appeared in the game’s console, I became engrossed in the brilliant writing. The writers clearly put a lot of care into the details of the game, and it shows.

Welcome to the Party

In Wasteland 2, you do’nt play as a singular hero. Instead, you command an entire party from a top-down perspective, managing our members’ skills, attributes and inventories. The combat is slow and turn-based, leaving ample time to consider the various styles of each character.

At the beginning of the game you have the option to select party members from a premade roster or customize your own four-player team. There are dozens of different cosmetic and character options that can easily absorb you for an hour (or more, if you are painstakingly critical about every decision). You can choose from specialization in blunt weapons, energy guns, assault rifles, medicine, bartering and loads more, and can add to these skill sets as the game progresses and you earn more points. 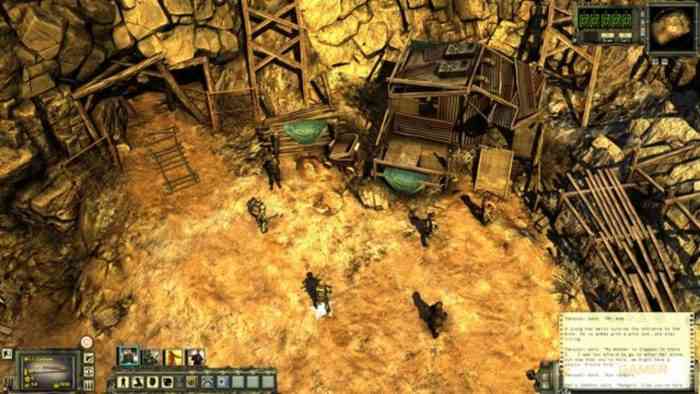 I appreciate the freedom and thought that can be channeled into creating the perfect power squad, and the game is mindful in how it goes about managing multiple team members. For example, when looting corpses or containers, there is a “Distribute All” option that will automatically dole out the proper equipment to the correct party members based on skill or experience. If you pick up sniper rifle ammo, the Distribute option will plant it in the pockets of the team member who chiefly uses sniper rifles.

When allocating skill points throughout the game, there is no need to switch characters repeatedly or try to memorize which member is proficient in which skill: all of the skill lines on one character’s menu will inform you how much experience another member has in any particular skill you hover over — no memorization necessary.  Features like these make a big difference when it comes to managing parties of four or more players, and cut out all the annoyances of switching back and forth to analyze stats and attributes.

In terms of adaptation to the Switch, the game looks pretty good on the screen when the Switch is undocked. Text size is adjustable in the settings if you feel the words are too small, but I had no issue reading or seeing objects of interest on the screen other than small physical elements of my characters during customization that were tough to see due to size. Wasteland 2 certainly earns no medals when it comes to beauty, as its graphics are relatively primitive and the animations leave much to be desired.  Still, it looks decent on the Switch, considering.

The main complaints I have about the game lay in the bugs and crashes that overpowered my Switch on numerous occasions. More than once, my game crashed entirely out of nowhere and triggered a system error message. I also had an issue with the game “freezing” during combat encounters, where all buttons could be pressed and the camera could be moved but everything would be completely stuck beyond control — a little internet research showed that this has been a common issue since the game launched back in 2014. Luckily, frequent autosaves keep these bugs from being anything more than a minor annoyance.

To be a little more nitpicky, I also would have preferred the game to have button remapping options on the Switch since I found a few of the controls to be unintuitive. This isn’t a deal-breaker by any means, but rather a warning that the game already has a steep learning curve due to its open-ended complexity, and adapting to the fixed and sometimes finicky controls will be just another challenge.

Wasteland 2 is a slam-dunk in almost every way for lovers of immersive RPGs with a nostalgic, old-school feel. In the hours and hours I logged before writing this review, I felt that I barely skimmed the surface of what this massive game has to offer. Aside from the bugs and the inability to reconfigure controls, it plays well on the Switch and doesn’t lose much in its adaptation to the small screen. I’d highly recommend this game to almost any Switch user who is a fan of the genre. For only $29.99, you’re getting an incredibly solid game that demands attention, strategy and an appreciation for good writing.

Accessibility note: Nearly every action performed in the game and all dialogue is/can be shown in text form. Both text speed and size are adjustable. Colorblind mode is available.

***Switch review code was provided by the publisher***