Monster Boy and the Cursed Kingdom Review – My Kingdom for a… Pig?

Monster Boy and the Cursed Kingdom puts players in the role of Jin, the young hero whose uncle Nabu (the Wizard of Booze?!) has taken to wreaking havoc across the land, turning people into various creatures. Nabu does not play favorites however, even turning his nephew Jin into an animal in an early portion of the game. Jin, ever playing the part of the hero, sets out to stop his uncle and change everyone back to their normal forms.

At its core, Monster Boy and the Cursed Kingdom is a side-scrolling adventure platformer with “Metroidvania” tendencies. While the game could be placed in this archetype, it does the various genres it is inspired from justice. As a whole, Monster Boy and the Cursed Kingdom does exactly what it sets out to, bringing the associated features of the listed genres together in a melting pot of a great game. Despite this, Monster Boy is not without its flaws as few as they might be. One of the issues I had with the title is regarding the platforming, as there were instances in which I felt a rope, ledge, or otherwise ended short of what they appeared to, resulting in multiple mis-steps and jumps. 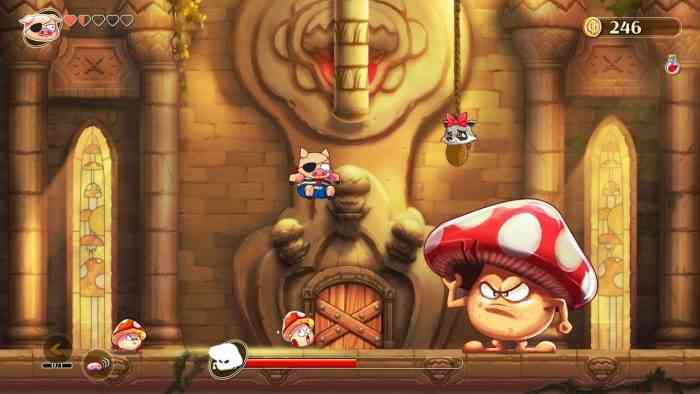 Gameplay aside, Monster Boy and the Cursed Kingdom looks amazing. Hand-drawn animated graphics are not new to gaming, but boy do they look great in this title. Not only does the game look great, but it runs smoothly as well. The crisp, vibrant graphics lends itself to the gameplay as well, making sure that puzzles and clues were easy to navigate, and enemy weakness were able to be discerned. The soundtrack of Monster Boy and the Cursed Kingdom is yet another aspect to praise, with charming tunes that rang loudly throughout the adventure, perhaps too much so. By that, I mean that the default volume of the music was quite high, though an adjustment in the menu alleviated that for me. Overall though, the music is quite enjoyable and the soundtrack was undoubtedly meticulously crafted.

Overall, Monster Boy and the Cursed Kingdom met my expectations and exceeded them in certain aspects. While the game does get off to a bit of a slow start, the various puzzles, bosses, platforming sequences, transformations, and much more eventually tie together into an exquisite title. The game is both technically and artistically crafted to provide a focused experience to players quite unlike many other games that captivated me this year. If you had to pick just one side-scrolling adventure platformer to play this year, Monster Boy and the Cursed Kingdom would not be a wrong choice.

The Best Indie News & Video Games From The Second Week of September, 2020
Next Beholder: Complete Edition Review – They Are Who We Thought They Were
Previous Katamari Damacy Reroll Review – Worth Rolling Through All Over Again