With another Summer Olympics fast approaching next year, that means another installment of SEGA’s long-running Mario & Sonic Olympic game series. And Mario & Sonic at the Olympic Games Tokyo 2020 has a bit of special vibe to it, being in Japan and also the first title on the Switch. Even so, this latest title mostly sticks to the tried-and-true formula and delivers a solid package that is a lot of fun even if it lacks depth at times.

If you haven’t played the series before, essentially Mario & Sonic at the Olympic Games Tokyo 2020 is a mini-game package. Various Olympic events such as Archery, Track and Field, even Rugby 7’s are presented in standalone form for you to try your hand at, choosing from a large stable of classic Nintendo and SEGA characters. Each playable character has some mild skill differences, but mostly it’s up to you to make your Personal Best using a choice of buttons or motion controls.

Two Friends on a Journey

There is also a Story Mode, which I found enjoyable but a bit simple and narratively lacking. Playing as Mario and Sonic, you follow Bowser and Dr. Eggman into a retro game system that takes you all back to the Tokyo 1964 Olympics. As you battle the bad guys in old-school Olympic trails, your friends including Luigi, Mushroom and … whoever Sonic’s friends are (I honestly had not heard of most of the SEGA characters before) try to save you in the “real” world by battling each other at the 2020 Games.

It’s a cute story that does introduce you to the events of the game well – I just found that it was very simplistic and got a bit repetitive; you chase the bad guys down and beat them at an event, then chase them and beat them again, and so on. Along the roughly 5-6 hour journey, Mario & Sonic at the Olympic Games Tokyo 2020 adds extras like bits of trivia for you to collect – it would have been nice if this was a mini-game in itself, with multiple-choice answers, instead of merely something to find and read. Overall, the Story Mode plays like an extended Tutorial that teaches you the basics and unlocks new events and playable characters. 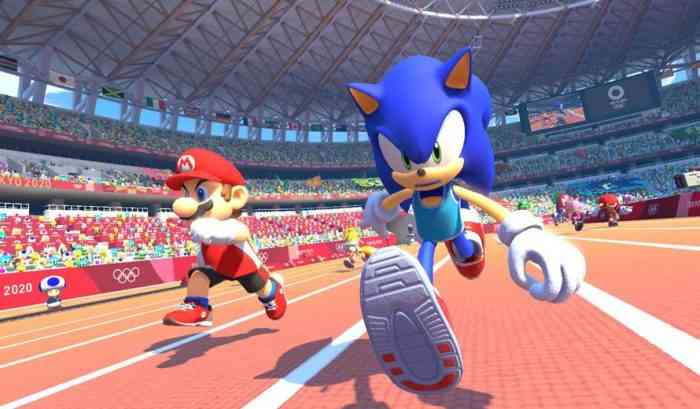 Story Mode is at its best during the Retro moments, though. Back in 1964 Tokyo, the game changes to 8-bit or 16-bit to match the original Mario and Sonic. Old-school touches like chiptune sound and a more limited color palette add to the time-warp feel that will bring a thrill to anyone who owned an original NES or SEGA Master System. It’s a great and creative way to break up the sameness of the game’s one-by-one tour of the Olympic events.

Besides Story Mode, you can play events individually and also against other people online. There isn’t a mode in which you play through all the events though, representing your country against the rest of the world, and that was a disappointment. I would have liked to see a mode like this, that lets you compete against AI foes in a continuing medal race, which is such a big part of the fun of watching the real Olympics. As it is, Mario & Sonic at the Olympic Games Tokyo 2020’s individual events feel fun but fleeting – each merely a one-off mini-game that you forget about afterwards.

As for the events themselves, some are stronger than others. All of them employ simple control dynamics – usually involving pressing the right buttons at the right time, or making the proper motion with your Joy-Con. It’s a system that’s easy to pick up and learn. It might be too simple at times, though, especially when using button controls. For example, the running events like 100 meter dash are mostly just spamming the same button as fast as possible. Sure, there is the option to use Joy-Cons for a more “authentic” feel but honestly, many players will use buttons on this portable system.

But there’s just so many events to choose from that it makes up for the gameplay shortcomings. You’ve got the traditional choices like Hurdles, Javelin, or Discus, but also newer events like Surfing and Rugby, and even Dream Events that put a fresh spin on the original. Dream Racing was a highlight for me, with power-ups and obstacles that made it very much like having an entire Mario Kart game included for free. On top of all that, there’s also the retro events like Diving and Volleyball, some of which could stand up well against real NES or SEGA titles I played back in the day. There’s no question that you get a lot of content for the price with Mario & Sonic at the Olympic Games Tokyo 2020.

Looks Great in Any Time Period

On the technical side, Mario & Sonic at the Olympic Games Tokyo 2020 is excellent and in keeping with the high standard of polish that we’ve come to expect from Nintendo exclusives. The 3D character renderings in the modern-day scenario are fully animated and adorable, although not voiced. And as mentioned, in the retro scenario a lot of work was clearly done to authentically recreate the look and feel of those classic games we love. Both scenarios also have a detailed Overworld depicting Tokyo both in 2020 and in 1964, giving you impressive little virtual tours as you travel around choosing events to compete in. Whatever it might lack in-depth, I found the world of Mario & Sonic at the Olympic Games Tokyo 2020 to always be an inviting, colorful and happy place to be.

Overall, Mario & Sonic at the Olympic Games Tokyo 2020 is an enjoyable experience that’s jammed-packed with Olympic-sized fun. With so many events and modes to choose from, all presented in Nintendo’s signature welcoming style, there’s something for everyone here. Just don’t expect a deep and engrossing experience; while there are nice extra touches like Story Mode and an added retro element, this is mostly a game meant for casual, bite-sized fun on the go. 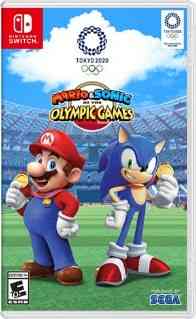 Mario and Sonic at the Olympic Games 2020 Characters Leaked

We’re Getting So Many Tokyo Olympics Games This Year
Next Disco Elysium Review – Disco Like You’ve Never Read Before
Previous Rain of Reflections: Chapter 1 Review – Well Made But Underwhelming